How Is the Godless West Working Out?

Dennis Prager
|
Posted: Sep 13, 2016 12:01 AM
Share   Tweet
The opinions expressed by columnists are their own and do not necessarily represent the views of Townhall.com. 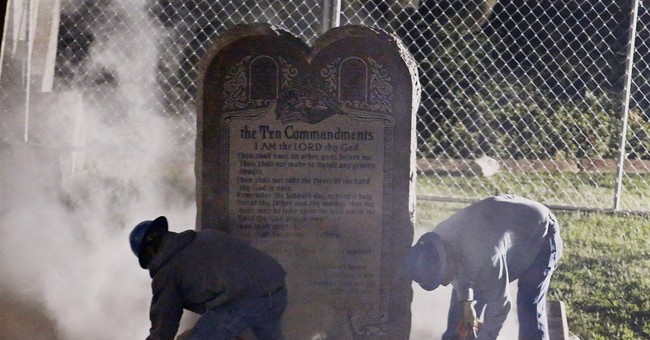 There are many recent developments in the godless West. To name a few:

--The New York City Council voted in May that public urination is not a criminal act.

--The San Francisco City Council decided, by one vote, to continue the city's ban on public nudity -- not, of course, on the grounds of "decency" but on the grounds of public health. Since that can easily be resolved by use of a towel on public benches and chairs, it is only a matter of time, probably a couple of years, before people will be permitted to walk around naked in San Francisco.

--A few weeks ago, teachers in Charlotte, North Carolina, were instructed not to refer to their elementary school students as "boys and girls" but as "students" and "scholars." The reasoning is presumably for inclusivity -- there may be a student who has no gender identity -- and that adults should not impose a gender identity on young people.

--In a New York Times op-ed column, a professor of philosophy noted his shock at learning that most young Americans do not believe that moral truths exist. They are incapable of asserting that anything, including killing for fun, is wrong beyond personal opinion.

These are all inevitable consequences of the death of belief in God and Judeo-Christian values, and of the Bible as society's primary moral reference work.

The West has been in moral decline since World War I, the calamity that led to World War II and the death of national identity and Christianity in most of Europe.

There has always been one exception: the United States. But now that is ending. The seeds of America's decline have been sown since the beginning of the 20th century, and they came to fruition with the post-World War II generation, the baby boomers.

Radical and aggressive secularism and atheism have replaced religion in virtually every school and throughout American public life.

We have gone from President Abraham Lincoln reading the Bible every day to Alaska Airlines feeling forced to stop passing out prayer cards with meals. In a hundred years, we've gone from near-total biblical literacy to near-total biblical illiteracy. One wonders whether half of America's college seniors could correctly identify Cain and Abel, or whether more than 1 in 10 Americans could cite the Ten Commandments. We have gone from President Franklin D. Roosevelt proclaiming the need to save "Christian civilization" in World War II speeches to a virtual ban on American presidents mentioning the word "Christianity." And, as is widely noted, Americans are no longer supposed to wish strangers "merry Christmas," and they must refer to a Christmas party as a "holiday party."

Similarly, the European Union constitution never mentions Christianity, despite the fact that it was Christianity that formed Europe.

The prices that we Americans and Europeans are paying for creating the first godless societies in recorded history amount to civilizational suicide. Boys and girls are not to be referred to as boys and girls; Western elites dismiss national identity as protofascism; the belief that moral truth exists has been destroyed and replaced by feelings and opinions; fewer people are marrying; and more people live alone than at any time in American history.

Western European countries have become empty, soulless places. They are pretty and appear materially secure (for now), but they stand for almost nothing (except "multiculturalism" and "tolerance"). They have replaced a Jewish population that overwhelmingly wanted to assimilate with a Muslim population that does not want to. And nearly all European countries are headed to Greece-like insolvency as fewer and fewer workers pay enough in taxes to support those who collect welfare, and as tensions with their Muslim inhabitants increase.

There is no way to prove that God exists. But what is provable is what happens when societies stop believing in God: They commit suicide.