Why Do People Still Donate to Universities?

Dennis Prager
|
Posted: Aug 16, 2016 12:01 AM
Share   Tweet
The opinions expressed by columnists are their own and do not necessarily represent the views of Townhall.com. 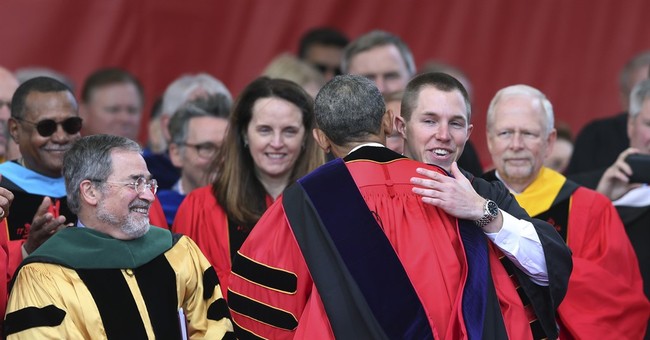 According to The Times, some college alumni are awakening to the fact that their beloved alma maters are nothing like the decent, open, tolerant, committed-to-learning places they remember. Rather, nearly every college and university in America has become the least open, the least tolerant, the most hate-filled and the most anti-American (and, of course, anti-Israel) mainstream institution in America.

As stated in the article: "Alumni from a range of generations say they are baffled by today's college culture. Among their laments: Students are too wrapped up in racial and identity politics."

Additionally, college students "are allowed to take too many frivolous courses."

College students graduate without taking any courses that elevate their intellect or character -- which was the original purpose of universities. You can get a bachelor's degree in English from UCLA without reading a Shakespeare play.

These students have also "repudiated the heroes and traditions of the past by judging them by today's standards rather than in the context of their times."

Most college graduates are taught to see the great men who founded America not only as not great but also as bad. After all, they were white, male and affluent. And some were slaveholders.

"University administrations," The Times says, "have been too meek in addressing protesters whose messages have seemed to fly in the face of free speech."

Meek? College administrators give new meaning to the word. With precious few exceptions, they have no principle except keeping their job.

That it took these alumni so many years to realize how destructive their beloved colleges have become is as unpleasant a surprise as The New York Times publishing this piece was a pleasant surprise.

The Times quotes Scott MacConnell, an alumnus of Amherst College:

"'As an alumnus of the college, I feel that I have been lied to, patronized and basically dismissed as an old, white bigot who is insensitive to the needs and feelings of the current college community,' Mr. MacConnell, 77, wrote in a letter to the college's alumni fund in December, when he first warned that he was reducing his support to the college to a token $5."

It also quotes a Yale University graduate named Scott C. Johnston, "who graduated from Yale in 1982 (and) said he was on campus last fall when activists tried to shut down a free speech conference, 'because apparently they missed irony class that day.'"

Yale now competes with Brown University and similar left-wing institutions in embracing students who employ fascist tactics, such as taking over deans' offices and shouting down conservative speakers.

But this reduction in giving probably won't matter much. Yale has an endowment of over 25 billion dollars. It can easily afford to have contempt for alumni like Johnston, for it knows that most alumni would continue to give if the university announced that it would not admit anyone who believes that God created the universe.

Wealthy fools will continue to give money to Yale and all the other left-wing seminaries still known (inaccurately) as universities. There is no group that better embodies the famous statement attributed to Vladimir Lenin: "The capitalists will sell us the rope with which to hang them."

Can you name a more moronic group than wealthy capitalists who give tens of millions of dollars to universities so they can teach students that capitalism is evil?

It is, of course, understandable why leftists give so much money to universities. But why do non-leftists?

First, and most importantly, it makes them feel good about themselves. Universities are the world's secular temples. Long ago, wealthy Americans gave to their churches, whereas they now give to universities.

Second, many of the very wealthy are savants -- people who are brilliant at making a lot of money, but not at much else. And there is no connection between wealth and wisdom. There are Silicon Valley and Hollywood billionaires who have less wisdom than many seniors at Christian high schools.

So, here's my advice to wealthy individuals who love America and do not wish to undermine the Judeo-Christian and classical liberal values on which it is built:

Give to medical research. And if you give to a college, give to one that actually venerates America and the life of the mind (Hillsdale College, for example). Or give to causes that are attempting to undo the damage of the universities. Examples include the Young America's Foundation, YAF, the Intercollegiate Studies Institute, ISI, the Foundation for Individual Rights in Education, FIRE, and Prager University (which has had over 100 million views just this year, the largest single group of viewers being young people under 35).

But if you love America, among the worst things you can do is contribute to 95 percent of the country's universities. America would better off if you burned that money.