Dennis Prager
|
Posted: Jun 07, 2016 12:01 AM
Share   Tweet
The opinions expressed by columnists are their own and do not necessarily represent the views of Townhall.com. 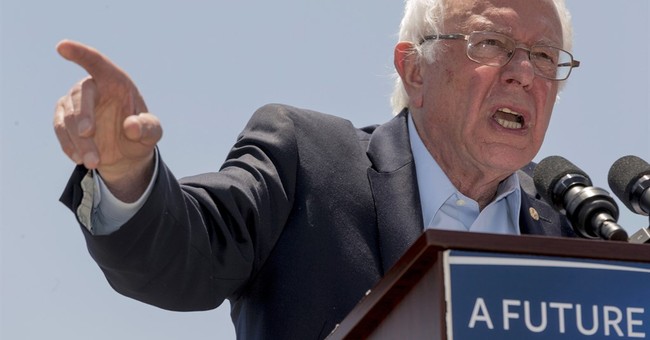 If you want to understand Sen. Bernie Sanders, this is what you need to know:

He is the quintessential modern identity-free man.

He is a non-Jewish Jew and a non-American American.

In Sanders' speeches and interviews, there is virtually no mention of his being a Jew (unless he's asked about it), and -- what's truly amazing for an American presidential candidate -- there are few mentions of America, except to lament American inequality, Wall Street corruption and other American evils.

The term "non-Jewish Jew" is not mine. It is generally attributed to a Jewish historian, Isaac Deutscher, who wrote an essay by that name in 1954. The term describes individuals who are born Jews (Judaism consists of a national identity and peoplehood identity, not just a religious identity) but identify as citizens of the world rather than as Jews, either nationally or religiously.

Once the walls of Jewish ghettos broke down and European Jews were allowed to leave Jewish enclaves, many Jews became non-Jewish Jews. In most cases, either they or their children assimilated into the societies in which they lived.

What, for example, do socialist Karl Marx, Soviet politician Leon Trotsky, linguist and political activist Noam Chomsky and billionaire George Soros have in common? They were/are all radicals who were born to Jewish parents, had/have no Jewish identity and did/do harm to Jews and non-Jews.

Marx was the grandson of two Orthodox rabbis (his father converted to Christianity), yet he wrote one of the most significant anti-Semitic essays of the 19th century, "On the Jewish Question" in 1844. In it are such statements as:

Trotsky, born Lev Bronstein, was the intellectual father of Russian, and later Soviet, communism. He, along with Joseph Stalin and three others (two of whom were also non-Jewish Jews), fought to succeed Vladimir Lenin as leader of the Communist Party.

When Trotsky was head of the Red Army, Moscow's chief rabbi, Jacob Mazeh, asked Trotsky to use the army to protect the Jews from pogrom attacks. Trotsky reportedly responded, "Why do you come to me? I am not a Jew," to which Mazeh answered: "That's the tragedy. It's the Trotskys who make revolutions, and it's the Bronsteins who pay the price."

Chomsky is hostile to the two identities with which he was born. He has devoted much of his life to working against America and Israel. To cite but one example, he traveled to Lebanon to appear with Hezbollah leader Hassan Nasrallah and lend his support to a group that is committed to the annihilation of Israel, which the United States lists as a terrorist organization.

Soros is another man who was born Jewish and later became a radical world citizen, a man who was alienated from America and his Jewish origins and damages both. Martin Peretz, former editor-in-chief of the New Republic, described Soros: "George Soros is ostentatiously indifferent to his own Jewishness. He is not a believer. He has no Jewish communal ties. He certainly isn't a Zionist. He told Connie Bruck in The New Yorker -- testily, she recounted -- that 'I don't deny the Jews their right to a national existence -- but I don't want to be part of it.'"

Sanders is a milder version of these radical non-Jewish Jews. He, too, is alienated from his Jewish and American origins.

And that explains his attitudes and policies. People with no national or religious roots who become politically active frequently seek to undermine the national and religious identities of others, especially those in their own national/religious group. In the case of Sanders, that means those with Jewish and American identities.

The radical non-Jewish Jew and the radical non-American American love humanity, but they hurt real humans, especially Jews and Americans.