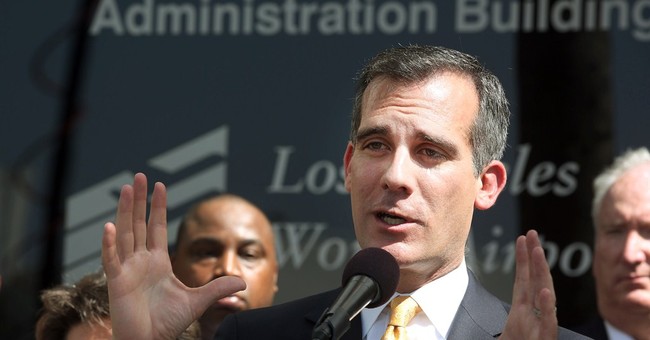 Last week, during the official celebration of the Los Angeles Kings winning the Stanley Cup, the mayor of Los Angeles, Eric Garcetti, told a jammed Staples Center that "there are two long-standing rules for politicians . ... They say never, ever be pictured with a drink in your hand and never swear. But this is a big f-----g day," he said, holding up a bottle of Bud Light.

You read that right. In front of 18,000 people at Staples and hundreds of thousands of others watching on television -- many of them, of course, children -- the mayor of the second-largest city in America held up a beer bottle and used the F-word.

This was not a whisper overheard by reporters. This was not an accidental loss of self-control. This was a planned use of obscene language in a public forum.

The question is: Does it matter?

According to the Los Angeles Times report, to the vast majority of people who heard it, it didn't.

"The audience roared. Players stood up to applaud.

"Outside Staples Center and L.A. Live, the remarks were a hit. Lake Forest resident Jeff Ottinger, who attended Monday's rally, said ... 'I think a lot of times politicians are uppity and stuffy and for him to actually be a fan is cool.'"

"It makes me have much more respect for him," said Jason Werntz, 45, of Burbank.

"Soon afterward," the Times reported, "Garcetti had similar, PG-rated messages on Facebook and his official Twitter feed. 'There are a few rules in politics, one is never swear, but this is a BFD. @ericgarcetti welcomes the #StanleyCup to LA."

There are those of us who believe that this is an example of a civilization in decline (or even in free fall). And there are those who think that this is either no "BFD" (as Garcetti and his admirers might say) or actually a good thing. Here are two typical comments on the Los Angeles Times website:

Bruuuce: "I love him even more!"

MarkRomero: "I thought the comment was very humorous!! I laughed out loud when I heard it. You no sense of humor haters will never get it. That's exactly why you are the way you are -- humorless and republican, most likely. Go KINGS!"

(He is right about "Republican" -- which tells you a lot about both the Republican and Democratic Parties.)

Nor was support confined to anonymous commenters and thousands of fans. Not one member of the Los Angeles City Council condemned the mayor. At least one, Councilman Mike Bonin, "said he agreed with the mayor's vivid description of the day."

Support for the mayor must have overwhelmed objection. As reported by the Times, "A day after using the F-word in televised remarks at an L.A. Kings victory party," Garcetti told those who found it offensive to "lighten up."

"'I think I was just being myself for a moment there,' Garcetti told reporters . ...

"'Look, I think people should be kind of light about this,' Garcetti said. 'It's something that plenty of people have heard in their lives for sure.'

"KNBC-TV reporter Conan Nolan asked the mayor if his cussing contributed to the coarsening of society.

"'We micro-analyze everything,' he added. 'We ought to let people be people. I was just being a person yesterday.'"

So, who are those who think this reflects serious social decay?

They probably fall into two categories: those over, let's say, 55 years of age and religious individuals of all ages.

Older Americans grew up in a religious America, and religions draw a strong distinction between the holy and the profane. That explains why even some non-religious older Americans will find this objectionable.

Teachers tell us how common it has become for students to curse in class -- including cursing teachers. Fifty years ago students were allowed to mention God in class prayer. But in 1962, Supreme Court justices considered it progressive to outlaw all school prayer. And school prayer was shortly thereafter replaced by school cursing.

To appreciate just how perverse our moral standards have become, imagine if Garcetti, instead of celebrating with a bottle of beer and the f-word, had lit up a cigar. He would have been excoriated by every liberal medium in the country. And many millions of Americans would have expressed horror at what a poor model he was for America's children.

A society that is horrified by a mayor publicly smoking a cigar, and either apathetic or enthusiastic about that mayor publicly holding up a beer bottle and cursing, is in deep trouble.

One is tempted to dismiss Eric Garcetti as either a fool or a bad guy. Based on what he did, and his continuing defense of it, he may well be the former. But he is not the latter. Above all, he is a man of the left, a Democrat, and a product of a secularized culture.