Why I Support John McCain 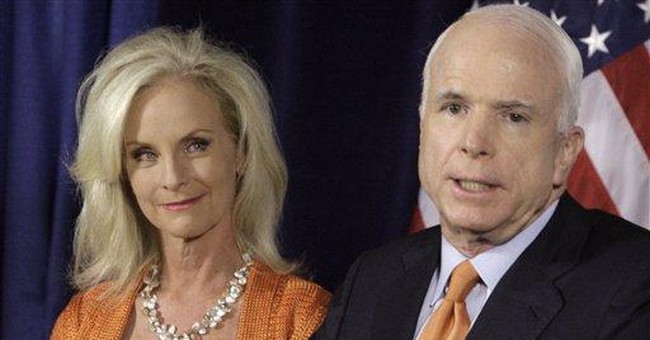 Last week, a conservative magazine reported that I would not vote for John McCain for president. The magazine based its claim on a column I had written in May 2007 about why I could not support John McCain for the Republican presidential nomination.

The magazine was wrong. Though I did not support Sen. McCain in the Republican primaries, the moment he became the presumptive Republican candidate I endorsed him wholeheartedly for president of the United States. Having not been a supporter from the outset, perhaps my endorsement of John McCain will carry more weight among conservatives who are still undecided about whether to vote for John McCain.

Conservatives who will not vote for McCain are well-intentioned utopians. They are comparing McCain to a consistently conservative candidate. The reality, however, is that McCain is not running against a consistently conservative candidate. He is running against a consistently left-wing candidate. And America cannot afford to have its first leftist president ever. It can afford liberal presidents -- such as Bill Clinton, or Jimmy Carter (who governed as a liberal but became a leftist after leaving the White House), or John F. Kennedy, or Lyndon Johnson, or Harry Truman -- i.e., all the Democrats who have been president since World War II. But the Democratic Party has moved well to the left of liberalism. And Barack Obama is at the left of that left-wing party.

That is why the argument that an Obama administration will be so destructive that Americans will reject the left and then elect a real conservative to undo the damage done in an Obama presidency is deeply flawed.

First of all, other than impeachment, there is no way to undo Supreme Court appointments, two or three of which a President Obama would likely make. And given how active most liberal judges are, it won't matter much if the country has some conservative epiphany and then elects a Republican president and Congress. Because even if the Congress and the president will not pass liberal legislation, a liberal Supreme Court will. On almost any social issue that matters -- the right to bear arms, late-term abortion, the definition of marriage, capital punishment, and many others -- a liberal Supreme Court will rule on these issues, and there will be nothing that a post-Obama Republican president, even with a Republican congress, will be able to do about them.

Moreover, the argument that Americans will have a conservative epiphany after four years of an Obama presidency is predicated on America being greatly damaged by his policies. What kind of mindset welcomes such damage to the country it loves for the sake of potentially gaining politically after the damage is done? Is it, for example, really worth a considerably weakened economy (which Barack Obama's tax and other economic policies would likely lead to), with its widespread suffering and unforeseeable social and political consequences, just to -- hopefully -- get a conservative into the White House four or eight years later?

And the damage won't necessarily be undone. Even Ronald Reagan, the most popular conservative to ever serve as president, could not roll back most liberal creations. He never could get rid of the useless Department of Education, for example. Nor could a then-popular President George W. Bush do a thing about Social Security even when he had a Republican House and Senate. And how will Barack Obama's successor undo the damage done to Iraq, the Middle East, the War on Islamic Terror, and the credibility of America's assurances to allies once Iraq slides into chaos as a result of America's precipitous withdrawal from Iraq?

Therefore, as well meaning and sincere as many conservatives are, this mode of thinking -- let the country suffer under a left-wing president, Congress, and Supreme Court and then it will come to its conservative senses -- will likely lead to a downward spiral from which it is hard to see the country escaping for a generation, if it is lucky.

There is one person who can prevent this unhappy future -- John McCain.

He will not raise taxes, the last thing we should be doing in a weakened economy.

He will reduce government spending, and thereby prevent the state from controlling even more of American life.

He will ensure that America wins in Iraq. That will make one of the biggest and richest Arab states the freest of the Arab states. And it will hand Islamic terrorists the biggest defeat they have ever suffered. It will teach potential enemies not to attack America (whether Iraq did so directly is irrelevant to the point). And it will reassure America's allies around the world, many of whom, as in Iraq, risk their lives for America and liberty, that America will never abandon them.

He will appoint conservatives to the Supreme Court and to federal benches, thereby depriving the left of its most powerful weapon in reshaping America in its image.

He may attract enough Hispanic votes (while securing the borders) to prevent that critical constituency from identifying with the Democratic Party, something that would ensure left-wing victories for decades to come.

He will develop nuclear power, environmentalist (read leftist) opposition to which has been morally indefensible. We would all love to have a solar powered or wind powered country. However, on planet earth at this time, nuclear power may be the cleanest source of energy we have. That is why France, not heretofore known as politically conservative, relies on nuclear power for nearly 80 percent of its electricity.

However noble their intentions, conservatives who do not vote for John McCain will be morally complicit in what happens to America during an Obama presidency.

Shocking Videos of Catastrophic Damage Coming Out of FL As Hurricane Ian Makes Landfall
Townhall
Teacher says students in her district pass the super-racist standardized tests because they're 'white and not hungry'
Twitchy
Lost In Space
Redstate
The Left Is Hoping DeSantis Botches Hurricane Response. Here's What They Didn't Count On.
PJ Media