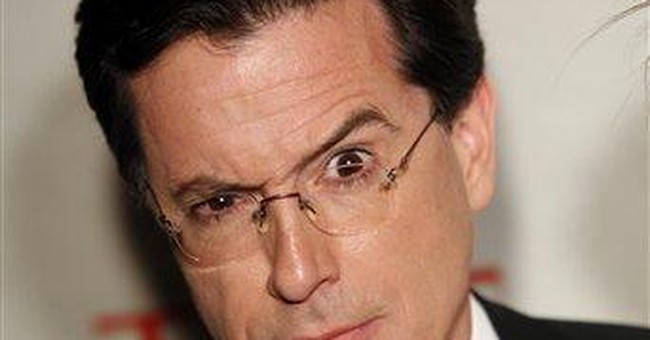 The state of the liberal mind is on display on this week's cover of Time magazine.

The already notorious cover takes the iconic photograph of U.S. Marines planting the American flag on Iwo Jima and substitutes a tree for the flag. Why Time's editors did this explains much about contemporary liberalism.

The first thing it explains is that liberals, not to mention the left as a whole, stopped fighting evil during the Vietnam War. As I wrote in my last column, whereas liberals had led the fight against Nazism before and during World War II, and against Communism after the War, the liberal will to fight Communism, the greatest organized evil of the post-War world, collapsed during the Vietnam War. The Vietnam War did to American liberals what World War I did to most Europeans -- it rendered them anti-war rather than anti-evil.

That is why liberals have gone AWOL in the fight against Islamic totalitarianism. As during the post-Vietnam Cold War, when liberals fought anti-Communists much more than they fought Communists, they fight anti-Islamists much more than they fight Islamists. Thus, Democrats routinely dismiss the Bush administration's talk about the threat of Islamic terror as "scare tactics."

But -- and this is a primary reason for Time's cover -- liberals know that they have largely opted out of the fight against Islamists; their only passion on this matter is abandoning the war against Islamists in Iraq. But like nearly all people who believe in a cause, they know that they have to fight some evil -- after all, the world really seems threatened by something. So they have channeled their desire to fight threats to the world to fighting an enemy that will not hurt them or their loved ones -- man-made carbon dioxide emissions.

It is much easier to fight global warming than to fight human evil. You will be celebrated at Time, Newsweek, The New York Times, the BBC and throughout the media world, no one will threaten your life, there are huge grants available to scientists and others who fight real or exaggerated environmental problems, and you may even receive an Academy Award and the Nobel Peace Prize. Individuals who fight Islamists get fatwas.

The Time cover is cheap heroism. It is a liberal attempt to depict as equally heroic those who fight carbon emissions and those who fought Japanese fascists and Nazis.

Second, for much of the left, the cover reflects the primacy of environmental concerns over moral concerns. For example, the left seemed never to care about the millions of Africans who continued to die from malaria largely because of the environmentalists' worldwide ban on the use of DDT as pesticide. The same holds true for another leftwing environmentalist fantasy. Changing corn into biofuels is causing a surge in food prices throughout the world. The European Union continues this policy despite warnings even from some environmentalists that food shortages, starvation and food riots are imminent. But human suffering is not as significant as environmental degradation.

Third, the left is far more internationalist -- global, if you will -- in its orientation than national. As the Time article states, "Going green: What could be redder, whiter and bluer than that?" Whereas, for most Americans patriotism remains red, white and blue, for much of the left it is green.

Fourth, the further left you go, the more inclined you are to hysteria. From the threat of DDT to the threat of heterosexual AIDS in America to that mass killer secondhand smoke, the left believes and spreads threats that, unlike the threat of Islamic terror, really are "scare tactics."

Years from now, Time's cover will be regarded as another silly media-induced fear. But, as with Time's 1974 article warning its readers about "another ice age" and its many articles on the threat of heterosexual AIDS in America, Time will just let public amnesia deal with credibility problems. Until then, however, one fact remains: Today, conservatives fight evil and liberals fight carbon emissions. That's what this week's cover of Time is about.