Trump a Voice of Reason on Police Reform

Debra J. Saunders
|
Posted: Jun 21, 2020 12:01 AM
Share   Tweet
The opinions expressed by columnists are their own and do not necessarily represent the views of Townhall.com. 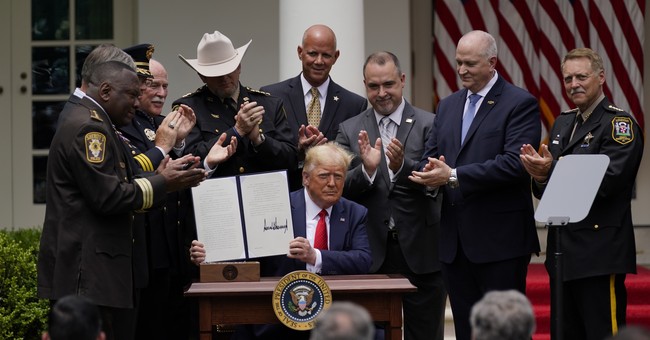 President Donald Trump was the voice of reason in Washington Tuesday as D.C. Democrats were sowing division.

Before he signed an executive order on police reform in the Rose Garden, Trump had reached out to the families of black men killed by police or vigilantes and met with them privately.

Then Trump signed the order in the Rose Garden flanked by law enforcement leaders who support the administration's reforms. When former President Bill Clinton worked with both sides on an issue, they called it "triangulation."

Much credit goes to Tim Scott of South Carolina, the only black Republican in the Senate, a frequent Trump whisperer and a man who wants to heal the nation.

Democrats have united behind the belief that law enforcement -- and by extension America -- is systemically racist. Scott has a more sophisticated take on the issue.

Scott knows firsthand that black men are more likely to be pulled over and cited by police for minor or nonexistent infractions than white drivers -- and he has made a point of educating fellow Republicans to the reality of "driving while black."

His solution isn't to "defund the police," as Black Lives Matter suggests, but to move law enforcement in the right direction.

Wednesday with the support of Senate Majority Leader Mitch McConnell, Scott unveiled the Just and Unifying Solutions to Invigorate Communities Everywhere or JUSTICE Act. It would promote de-escalation in use-of-force training, use federal funds to discourage police chokeholds, increase record-keeping to prevent "bad apple" cops of moving to different departments, promote the proper use of body cameras, require federal reporting when police officers discharge their weapons, fund research into the use of no-knock warrants and make lynching a federal crime.

"We're not a racist country," Scott said Wednesday, but "we deal with racism because there's racism in the country."

And what is Scott's reward? Sen. Dick Durbin, D-Ill., dismissed Scott's bill as a "token half-hearted approach." Token. Get it?

Earlier in the month, NBC News anchor Craig Melvin asked Scott if the GOP was using him as a "token."

Durbin later apologized, but only after Scott said the Democrat's use of the word "token," a liberal slur reserved for conservative African Americans, "hurts my soul."

The Daily Caller has started mimicking a frequent cable news trick of asking Republicans to react to Trump tweets by calling all Democratic senators to get their reaction to Durbin's remark. Crickets.

Evidently, Scott would be more authentic if he spoke like California's Kamala Harris, one of two black Democrats in the Senate, when she touted the Democrats' Justice in Policing Act of 2020. "America's sidewalks are stained with black blood," Harris said.

She's so proud of that quote, she has it on her website.

I know Harris wants former Vice President Joe Biden to pick her to be his running mate. What's scary is that she thinks this is the way to do it.

Democrats now face a choice. They can work with Scott and GOP senators to pass a bill meant to promote community-based policing in a way that encourages civil rights advocates and the police to work together.

Or they can vote to keep Scott's bill from a floor vote because they want to keep their base angry and raw.

Remind you of anyone?