Debra J. Saunders
|
Posted: Sep 26, 2017 12:01 AM
Share   Tweet
The opinions expressed by columnists are their own and do not necessarily represent the views of Townhall.com. 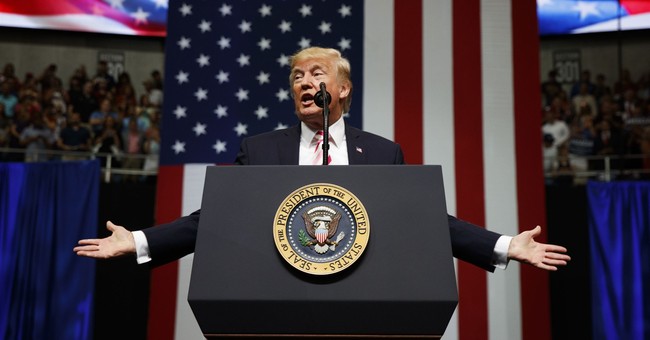 WASHINGTON -- The future of Donald Trump's presidency could ride on what Alabama Republicans do at the polls on Tuesday.

If Trump's favored candidate, Sen. Luther Strange, wins after trailing in recent polls, the president can claim that he still can work magic with the GOP base. But if challenger Roy Moore, a former Alabama Supreme Court chief justice, wins the primary, Trump and the party will have to fight harder to get things done.

Strange, 64, was appointed to the U.S. Senate after Trump picked then Sen. Jeff Sessions to be his attorney general.

It was a messy appointment. Strange, the Alabama attorney general, had been investigating then-Gov. Robert Bentley for improperly using state funds to cover up an extramarital affair. Shortly after naming Strange to succeed Sessions, Bentley pleaded guilty to two misdemeanors and resigned in a deal that spared him jail time.

Moore, 70, carries a different kind of baggage. Known as the "Ten Commandments judge," he became a national figure in the 1990s when he refused a court order to remove a plaque of the Ten Commandments from his county bench. He rode his notoriety to become the state Supreme Court's chief justice in 2000 and again defied a court order to remove a large granite slab with the Ten Commandments, leading to his removal from the court. In 2012, voters returned Moore to head the high court again, a position he lost in 2016 after he directed judges not to issue marriage licenses to same-sex couples.

Trump endorsed Strange in August, despite the stiff challenge presented by a crowded primary field. In the Aug. 15 primary, Strange finished second, with 33 percent of the vote to Moore's 39 percent.

The GOP establishment prefers Strange to Moore because they think he has a better chance against Democrat Doug Jones, a former federal prosecutor who could draw moderate Republican votes in the Dec. 12 general election.

Democrats concur. "I'm happy about Roy Moore winning," said Paul Maslin, who polls for the Jones campaign. "That's the one chance we've got."

If the GOP loses this race, its majority would shrink to 51-49 in the Senate. That would make it harder to pass measures in the Senate that require 60 votes to earn a floor vote -- and harder still as Republican lawmakers see less reason to risk their seats for Trump's agenda.

"I don't view those supporting Moore as opposing Trump," said GOP strategist and CNN contributor Alice Stewart. "A lot of them were for Moore long before Trump put his support in for Strange. Everyone picked their candidate and didn't let any opposing factors change their mind."

Trump's mistake, Stewart said, was to support Strange. The president seems to concur. In his rambling Huntsville speech, Trump confessed, "I might have made a mistake," because if Strange loses the media will cover his defeat as a loss for Trump.

It was at the Huntsville rally that Trump brought up football players who won't stand for the national anthem. "Wouldn't you love to see one of these NFL owners, when somebody disrespects our flag, to say, 'Get that son of a b---- off the field right now. Out. He's fired.'"

Did Trump bring up the NFL anthem issue in order to help Strange rally the GOP base and confound the pollsters with a win?

"No, he doesn't think that way," said Maslin, the Democratic pollster, adding that he believes Trump brought up the subject to win cheers from patriotic football-loving Alabama voters

"I think he did it on purpose," agreed Henry Olsen, author of "The Working Class Republican: Ronald Reagan and the Return of Blue-Collar Conservatism." He declined to guess whether his goal was a Strange victory or a boisterous audience reaction.

Sometimes when things are going really well for Trump, he has a way of stoking a gratuitous controversy and "instinctively moves to an issue where his side would rally to him."