To DACA Perchance to Dream

Debra J. Saunders
|
Posted: Sep 19, 2017 12:01 AM
Share   Tweet
The opinions expressed by columnists are their own and do not necessarily represent the views of Townhall.com. 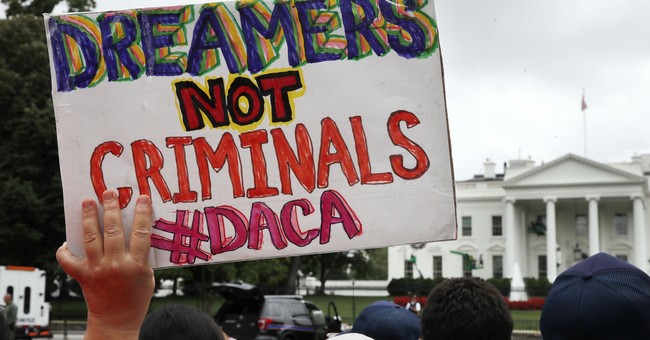 DACA is the 2012 Deferred Action for Childhood Arrivals program imposed under President Barack Obama that gave temporary legal status to undocumented immigrants who came to the United States as minors. The Trump administration rescinded DACA on Sept. 5, after a six-month wind-down period that could allow some of the 800,000 undocumented immigrants enrolled in the program to stay in the United States for up to two years.

The DREAM Act -- or Development, Relief, and Education for Alien Minors Act -- has been the name for proposed legislation to provide legal status and a path to citizenship for undocumented immigrants brought into the United States as children. The House passed a version of the bill in December 2010, but it failed to garner the needed votes to pass in the Senate. "Dreamers" is the term used for DACA beneficiaries and those undocumented immigrants who would benefit from the DREAM Act.

When Senate Minority Leader Chuck Schumer and House Minority Leader Nancy Pelosi dined with Trump at the White House Wednesday night, as expected, the three discussed passing a measure to shield these so-called Dreamers from deportation.

After Attorney General Jeff Sessions announced the wind-down of DACA, Trump had made it clear that he wanted Congress to pass legislation to restore the policy. (Why did Trump rescind it then? As a candidate, he promised to rescind the policy "immediately." Also, some legal scholars argue that Obama did not have authority to unilaterally override immigration law passed by Congress).

According to the Democrats, the dinner yielded the beginning of an agreement. Pelosi issued a statement that began, "Tonight, Leader Schumer and I had a productive meeting with President Trump where we agreed to a plan to work out an agreement to protect our nation's DREAMers from deportation. We insisted that the bipartisan DREAM Act would be the basis for that protection and that we would review border security measures that didn't include building a wall."

To some Trump supporters, that looked like a negotiation in which Trump gave Democrats' their path to citizenship, while he gave away his signature campaign issue, the border wall. Not exactly the art of the deal.

Trump and Pelosi share one trait -- neither is known for talking with precision.

At her Thursday morning press briefing, Pelosi said that the three discussed "the DREAM Act, DACA. The president likes to call it DACA." -- as if the two measures are practically interchangeable when they are not.

Trump, in particular, is known for making cryptic statements that his enthusiastic base is forced to interpret -- and often re-interpret as the president and his aides issue clarifications that further confuse others. That's what happened during the week. In response to the Schumer-Pelosi statement, White House Press Secretary Sarah Sanders tweeted that "DACA and border security were discussed," but "excluding the wall was certainly not agreed to."

In the morning Trump himself tweeted, "NO deal was made last night on DACA. Massive border security would have to be agreed to in exchange for consent. Would be subject to vote." But by the end of the day, Trump was talking as if there was a preliminary deal. He told a reporter, "DACA now, and the wall very soon."

But a deal for what -- the DREAM Act or a legislative DACA?

The Trump White House did not respond to a request for clarification. But Thursday Trump told reporters, "We're not looking at citizenship." At Friday's press briefing, Sanders said no deal on DACA had been finalized, and the White House would release "what our specific priorities and principles are in that front over the next seven to 10 days." Asked about the president's view about a deal that conferred citizenship, Sanders noted that DACA starts with the word "deferred" and added, "the whole definition says deferred, so I think that takes away that permanent piece."

Pro-enforcement activists equate the path to citizenship with amnesty. Pelosi argued the term does not fit as DREAMers have to jump over hurdles to qualify for citizenship.

As for Trump, he says he is talking about DACA, not the DREAM Act, so he appears to stand on stronger ground than Pelosi on his amnesty remark.

But will Trump stick with that position? In August, Trump threatened to close down the government if that's what it took to get the wall built over objections to "obstructionist Democrats." In September, he wants to pass DACA so much he is willing to defer funding for the wall. Stay tuned.