What Is Trump Doing and What Does He Think He's Doing?

Debra J. Saunders
|
Posted: Jan 29, 2017 12:01 AM
Share   Tweet
The opinions expressed by columnists are their own and do not necessarily represent the views of Townhall.com. 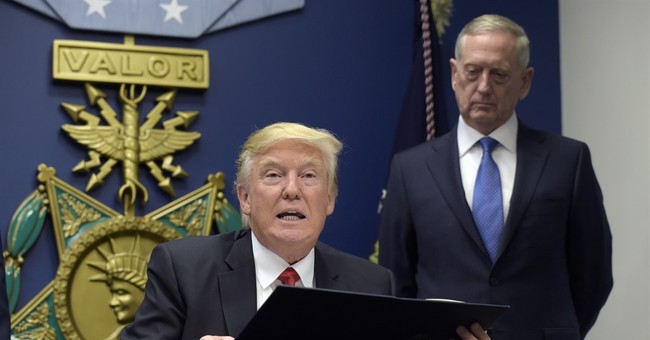 WASHINGTON -- Hang on, friend. This is going to be a bumpy ride.

In his first three days, Trump signed executive orders to peel back Obamacare regulations, expedite environmental reviews for federal infrastructure projects, build a wall along the U.S.-Mexican border and withhold federal funding from sanctuary cities. In addition, Trump signed memoranda to withdraw the United States from the Trans-Pacific Partnership, approved the Keystone pipeline, froze the hiring of civilian employees, and banned federal aid to international organizations that support or perform abortions. Trump closed the week signing an executive order suspending temporarily the issuance of visas for refugees from seven Muslim-majority countries.

In addition, the new president met with leaders from both parties in Congress as well as business titans and labor representatives.

"On some level," Reno communications consultant Karen Hanretty observed, Trump's efforts to reach across the aisle and mix with the organizations not usually associated with the GOP, disproves "the ongoing theme" that Trump is "divisive."

Yet while much of Washington spent the week marveling at many things Trump was doing, Trump's odd statements, and those of spokesman Sean Spicer, also had observers questioning just exactly what Trump thought he was doing.

Over the weekend, Trump apparently sent Spicer out to scold the press for not recognizing that Trump drew "the largest audience to ever witness an inauguration -- period -- both in person and around the globe." Monday morning dawned with beltway mavens speculating whether Spicer would or should last in his new job after that damaging hit to his credibility.

(In his first real press briefing Monday, Spicer redeemed himself and his career when he admitted Trump did not draw the largest crowd ever to the Washington Mall.)

Then, Monday night, Trump told someone at a bipartisan congressional leadership meeting that he would have won the election but for unsubstantiated voter fraud committed by millions of illegal voters. Later reporters demanded to know if Trump would launch an investigation given the seriousness of the charges. Voter fraud became the media chew toy of the week. (Trump suggested he would order an investigation, but failed to do so by Friday evening.)

House Minority Leader Nancy Pelosi told reporters, "I felt sorry for him. I even prayed for him. But then I prayed for the United States of America."

Thursday, Spicer dangled the idea of a tax on Mexican imports to fund the border wall during a gaggle; the press spent the afternoon trying to figure if Trump was going to go start a tariff war or back a different tax. (Spicer later walked back his comment.) Meanwhile, Mexican President Enrique Pena Nieto pulled out of a summit planned for this week.

"It seems like there's been some unnecessary distraction," noted Hanretty, a Trump voter. "At the same time, if you're willing to look past the tweets and the pressroom brouhaha, at the end of the day, he's delivering. That alone is astounding."

After all the chatter and rumbling, Trump ended the week on an up note. His joint press conference with British Prime Minister Theresa May showed voters an executive mindful of America's "special relationship" with the United Kingdom. May showed she was no pushover when she announced Trump had told her he was "100 percent behind NATO." Both leaders pledged to serve overlooked working taxpayers.

Trump showed he could be flexible when he reaffirmed that though he believed enhanced interrogation techniques work, nonetheless he would defer to Secretary of Defense James Mattis and others who object to using them.

The Friday press conference also showed an endearing side to Trump. Asked how May and he would get along, Trump answered, "How the relationship works out, I won't be able to tell you that (until) later. I've had many times I thought I'd get along with people and I don't like them at all. And I've had some where I didn't think I was going to have much of a relationship and it turned out to be a great relationship. So, Theresa, we never know about those things, do we?"