As the Briefing Room Turns

Debra J. Saunders
|
Posted: Jan 20, 2017 12:01 AM
Share   Tweet
The opinions expressed by columnists are their own and do not necessarily represent the views of Townhall.com. 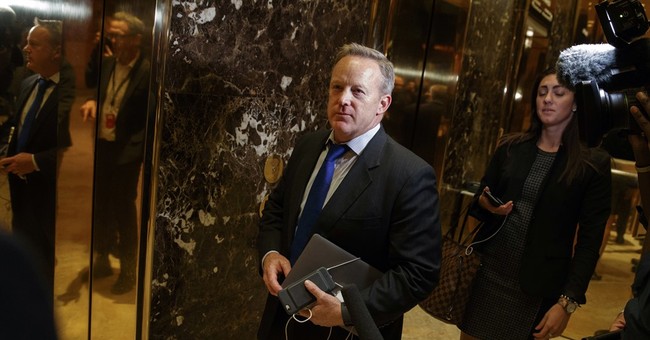 Trending
President-elect Donald Trump's transition team had been flirting with moving the daily White House press briefing from the West Wing to nearby quarters that could accommodate more journalists. The White House Correspondents Association registered its concern -- while not present in public sentiment, umbrage followed.

By Thursday, Team Trump assured the media that Monday's press briefing -- the first daily briefing from the new Trump administration -- would indeed take place in the James S. Brady Briefing Room. It was another episode in which Trump played the media like a fiddle.

The brouhaha started last week when Trump spokesman Sean Spicer teased the idea of moving the briefing room in order to accommodate the large number of journalists clamoring to cover Trump. "The press went crazy," Trump told Fox News' Ainsley Earhardt on Wednesday. "So I said, 'Let's not move it.'" Trump also said that he would "pick the people" who get into the briefing room.

Spicer confirmed the decision, after he noted the relocation trial balloon was in response to "an unprecedented interest in covering this president."

Some observers could not help but wonder if the flap was part of a dance -- the sort of soft drama often seen in Trump's theatre of public negotiation.

Alice Stewart, a CNN commentator and GOP strategist, watched with fascination. On the one hand, she saw shades of "The Art of the Deal," where Trump says "something really extreme and he works his way back."

On the other hand, as a former journalist, Stewart understands "the initial sense" that Trump is trying to curb access, even though she sees the relocation trial balloon as a means to include more journalists than can fit in a room with a mere 49 seats.

Stewart expects the Trump administration to return to the proposal. As Spicer noted, in the confines of the current quarters, press briefings are "going to be extremely crowded."

Robert Thompson, director of Syracuse University's Bleier Center for Television and Popular Culture, saw the symbolism behind the gambit. "Instead of being right there in the belly of the beast," the White House press corps saw the announcement as a sign it would have less access -- this after a campaign known for "bypassing the traditional media."

What better target for Trump than journalists, a group that actually polls lower than he does? A September Gallup poll found that 32 percent of Americans have a great deal or fair amount of trust in the news media -- that's far lower than the 44 percent of Americans whom Gallup reported approved of Trump's handling of his transition.

Thompson believes Trump has been using "journalism as the opposition party, and he's been doing that fairly effectively."

Trump's transactions with reporters have run hot and cold from the day he took the escalator ride down the Trump Tower to announce his bid for the White House. Early in the primaries, Trump frequently appeared on cable news networks, at times he simply dialed into shows. The analytics firm mediaQuant estimated that Trump's "free media" would have cost $5 billion if purchased in advertising. The figure for Hillary Clinton was $3.2 billion.

During the campaign, Trump lampooned Clinton for not holding a press conference during a 276-day spell. Then after a July 27 newser, Trump himself stopped the practice for 24 weeks -- which ended with this month's dramatic first post-election press conference in Trump Tower, where Trump once again trashed some media outlets -- BuzzFeed and CNN -- while praising others, in this instance The New York Times.

Trump frequently derides "the dishonest media," even as he grants exclusive interviews to select outlets. As Team Trump was mulling the briefing-room move -- and drawing criticism for shutting out the press -- the president-elect had granted interviews to Fox News and beltway journalism icon Mike Allen for the launch of his new journalism startup, Axios. On Saturday, Trump phoned the Washington Post's Bob Costa to noodle about health care. Trump also talked to the German newspaper Bild about tariffs for foreign-made cars.

"In many ways," Thompson observed, Trump has been "hyper accessible. That's the equation that he and his people have figured out. The idea that he ignores the press is absolutely wrong." Instead, Trump "uses the press."

Trump also has mastered the use of social media. "He knows that every time he tweets something," reporters have to repeat it.

As Spicer told Thursday's press gaggle, "We have tried to be accommodating."

Stewart is sympathetic with the impulse that prompted talk of moving the briefing room. "I don't blame him for wanting to include more media in these press conferences, especially some of the more conservative bloggers who don't have a seat at the table."

Stewart understands how competitive the news industry is. You can turn on cable and watch reporters who have seats to the briefing room lament any talk of a move. The status quo is in their interest. But outside that room are a lot of reporters who want in. And Donald Trump knows it.