Feel Safer: Easier to Get Parole, Harder to Buy Bullets

Debra J. Saunders
|
Posted: Jul 10, 2016 12:01 AM
Share   Tweet
The opinions expressed by columnists are their own and do not necessarily represent the views of Townhall.com. 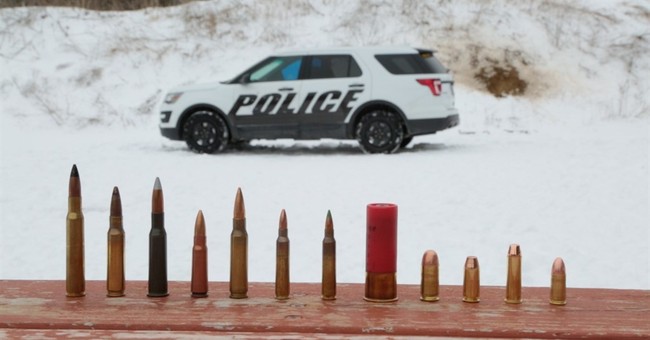 Gov. Jerry Brown and the Democratic Legislature have a unique plan to enhance public safety in California. They have reduced the state prison population from close to 150,000 in 2010 to 113,000 now by downgrading what crimes put an offender in prison. Now they are pushing a ballot measure that would enable repeat serious and violent offenders to qualify for early release -- to further reduce the state prison population. No worries, though, because they also are passing laws that make it harder or costlier for everyone to buy guns and ammunition.

This month, Brown actually vetoed a bipartisan measure to make stealing a gun a felony. In his veto message, Brown wrote that Assembly Bill 1176 was "nearly identical" to a provision in a gun-control ballot measure championed by Lt. Gov. Gavin Newsom. "While I appreciate the authors' intent in striving to enhance public safety, I feel that the objective is better attained by having the measure appear before the voters only once." Imagine the outcry if a Republican had vetoed that bill for such bald partisan reasons.

It's hard to buy Brown's explanation when the governor did sign a Democratic bill to require background checks for ammunition purchases. As The San Francisco Chronicle's Melody Gutierrez reported, ammunition background checks also are included in the Newsom gun initiative.

Count me among the skeptics about the Newsom measure. I supported California's 1989 assault-weapons ban, but I don't think it made the state safer. It did not prevent last year's San Bernardino terrorist attack, where 14 innocent people were killed. Newsom wants to expand state gun laws to prohibit large-capacity magazines. When Democrats start talking gun control, law-abiding gun owners rush to gun stores and buy more guns. The most certain outcome of the ammo checks, predicted Michael Rushford of the Criminal Justice Legal Foundation: "People will buy God-awful amounts of bullets."

Once elected, Brown continued to pare the inmate population, so in the last decade the state prison population dropped by almost one-third. The governor pushed "realignment," his plan to move nonserious, nonviolent offenders from prison to overcrowded local jails. Democrats also pushed Proposition 47, approved by voters in 2014, which downgraded many property and drug crimes from felonies to misdemeanors that result in jail, not prison, terms. All the while, Brown talked up reductions in the number of inmates as a great way to save taxpayers money.

Brown's Proposition 57, which would allow offenders convicted of nonviolent felonies to be considered for early parole, is supposed to "save money by reducing wasteful spending on prisons." Don't hold your breath. The state's annual corrections budget is $10.6 billion; it was $10 billion in 2007. Brown's own corrections secretary, Scott Kernan, told The San Francisco Chronicle editorial board that if voters thought inmate reductions would cut costs, it was "an unreasonable expectation." The corrections budget would be bigger without inmate reductions, Kernan argues. Still, taxpayers won't see a smaller tab with fewer inmates because the state cannot close prisons without violating the federal overcrowding order.

Proposition 57 authorizes parole for nonviolent offenders who have completed "the full sentence for their primary offense," according to the Yes campaign. But the measure takes away three-strikes enhancements for former violent convictions, Rushford counters. He has taken to calling Prop. 57 "the Jailbreak Initiative."

In 2014, the Criminal Justice Legal Foundation opposed Prop. 47 because of its foreseeable and unintended consequences. A provision that downgraded the classification for theft to under $950 changed gun-boosting from a felony to a misdemeanor. Last year, San Franciscan Kate Steinle and Oaklander Antonio Ramos were killed with stolen guns. Rushford is at a loss to explain why Brown vetoed the gun-theft bill. When voters approved Prop. 47, he figures, "I don't think voters knew what they were doing."

Prop. 57 could repeat the cycle. "One of the significant concerns that we have," said Yuba County District Attorney Patrick McGrath at a news conference, "is that the average voter, going into a voting booth and simply reading a title and summary, will have no idea of what the actual consequence of the language is."

I think voters' perceptions are 10 years behind reality. Folks think it's 2006 with 162,000 inmates. The policy pendulum swings toward overincarceration, then overcorrects with underincarceration. Instead of passing more laws to release inmates, Brown and company should assess the results of their so-called reforms. Attorney General Kamala Harris just released a report that shows violent crime went up in 2015. Maybe it's a fluke. Maybe not. Maybe the state already has released thousands of repeat offenders who endanger public safety. Don't you think it makes sense to find out before handing out more get-out-of-prison-early cards?