Debra J. Saunders
|
Posted: Feb 07, 2016 12:01 AM
Share   Tweet
The opinions expressed by columnists are their own and do not necessarily represent the views of Townhall.com. 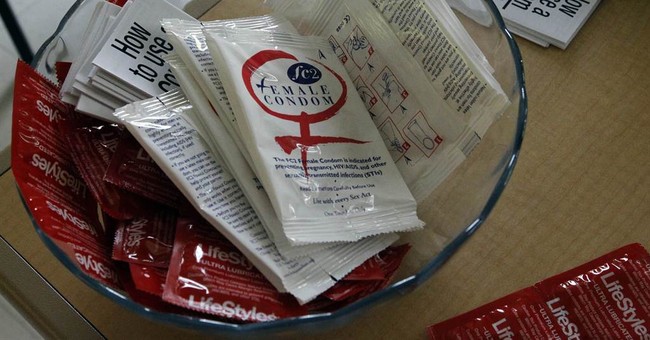 Trending
The San Francisco Unified School District's board is poised to expand its Condom Availability Program for high school students into middle schools. The school district no longer offers Algebra I as an eighth-grade course -- Algebra I has been folded into a two-year, eighth-grade and ninth-grade class that is supposed to be more comprehensive. But the board is ready to bring a high school program to middle school by handing out condoms to sixth-graders.

Superintendent Richard Carranza backs the proposal to distribute condoms to middle schoolers "in conjunction with a session with a school nurse or social worker to identify risk factors and provide referrals or resources as necessary." The idea, supporters say, is not to encourage preteens to have sex, but to make sure that the estimated 5 percent of San Francisco middle schoolers who are sexually active protect themselves from sexually transmitted diseases and pregnancies.

"It's not going to be like Mardi Gras," school district Director of Safety and Wellness Kevin Gogin told me. (There will be no floats with school nurses tossing out condoms.) The idea is to allow students to visit a social worker or nurse, who can ascertain if he or she is already sexually active and taking precautions. Everything is confidential unless a social worker sees a problem -- an adult sexual predator -- and sees a need to contact Child Protective Services.

When middle schoolers are having sexual intercourse a nurse or social worker could give the student condoms and useful information. The program has been successful in city high schools, Gogin said.

There is none. Gogin named another district that might be looking at implementing the same program in its middle schools. That tells me San Francisco is about to conduct a social experiment on children.

I phoned a couple of education reformers to get their take on the program. Most wanted nothing to do with the controversy. They are concentrating on what they see as the dumbing down of school curricula. I understand. It's not as if I want to write this column, but somebody's gotta do it. I reached Lisa Snell, director of education and child welfare at the libertarian-leaning Reason Foundation. She deftly questioned the "age appropriateness" of condoms at middle schools.

Many parents already distrust public schools, Snell observed, and this program simply reinforces their suspicions. Snell asked, "Why even go there?"

Answer: Because they can't help themselves. Carranza and the school board want parents to trust them on academics, but they don't trust parents to know what's wrong for their own kids.

Snell sees an unnecessary foray from public schools' "core mission." Parents send their children to public school to learn to read, to compute and to discover the science behind the world around them. According to SFUSD's own measure, only about half of San Francisco students are proficient in math and reading, while half are not. With that mediocre record in an affluent enclave, the district ought to focus on raising student achievement.

Gogin told me that the condom program would not take away from instructional time. If educators can't teach half of their students math, what makes them think they can teach seventh-graders sexual responsibility?

I asked Gogin if something happened to propose condom giveaways at middle school. The answer is no. The district was aware that some middle school students are sexually active. Sadly, there have been pregnancies and sexually transmitted diseases in middle schools, but no one event triggered the policy change.

That's the problem with San Francisco -- elected officials are always pushing the envelope, when nobody asked them to.