Debra J. Saunders
|
Posted: Jan 28, 2016 12:01 AM
Share   Tweet
The opinions expressed by columnists are their own and do not necessarily represent the views of Townhall.com. 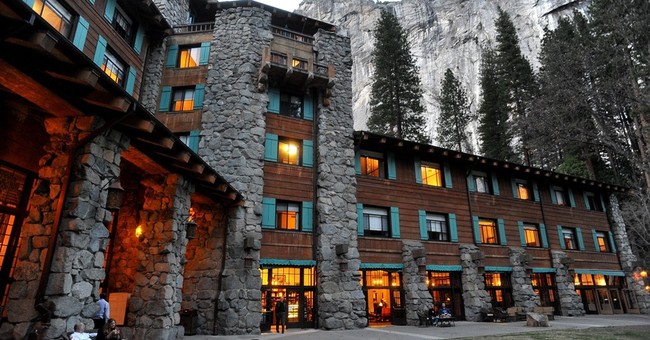 On Jan. 14, the National Park Service announced that Yosemite's iconic Ahwahnee Hotel will become the Majestic Yosemite Hotel on March 1. A news release explained that because of a trademark dispute with outgoing concessionaire Delaware North of Buffalo, N.Y., the Wawona Hotel will become Big Trees Lodge and Curry Village will become Half Dome Village. People readily saw a case of corporate greed. At Mother Jones, Kevin Drum posted a blog with a photo of company executives and the heading: "Meet the corporate suits who claim to own the trademark to 'Yosemite National Park.'"

The next day, Drum conceded his initial take was "probably wrong." The story is less of an outrage than "a fairly pedestrian contract dispute." It turns out Delaware North does have rights to its concession's intellectual property -- including names -- because the company had to buy those intangible assets from the previous operator. The National Park Service acknowledges this fact and values these assets at $3.5 million. Delaware North wants $51 million. The matter will be settled in federal court.

In other words, this dispute is like an ugly divorce, with the park-loving public as the children. The National Park Service is ready to walk down the aisle with a new bride. It is looking to its bright future, while the soon-to-be-ex-wife wants to make sure that she gets every dime to which she feels entitled.

Delaware North paid $61.5 million for tangible and intangible assets in 1992. Unfortunately, the old deal didn't stipulate what specifics -- trademarks, logos, mailing lists -- were worth. According to government documents, the new deal doesn't require the operator, Aramark, to pay fair value for them.

National Park Service spokesman Scott Gediman acknowledged that if Aramark pays bottom dollar for Yosemite's big names, taxpayers don't benefit. Aramark does. The public didn't have a dog in this fight -- until the park service announced it was dumping historic names. It was natural for people to assume that Delaware North was messing with California's favorite national park. But as Dan Jensen, once president of Delaware North Yosemite, told me, "We've never threatened to take the names." On Jan. 2, Delaware North sent the park service a letter stipulating that Aramark could use the old hotel names royalty-free pending a court decision.

Will Delaware North abide by whatever the court decides? "It's my understanding, yes," Jensen answered, before adding he is not a lawyer.

So why did the Park Service announce the name change when two weeks earlier Delaware North essentially begged the government not to? "It was a pre-emptive move," Gediman answered. I understand why the government might think Delaware North doesn't deserve buckets of money for maintaining park property, but that's for a judge to decide.

Monday, Delaware North filed a brief seeking damages for what it sees as a government attempt to "create a public outcry that would force" it to relinquish its property at a cut rate. Move over corporate greed, and make way for government overreach. The Park Service was playing the public with a gratuitous threat to benefit one side in a corporate dispute. There's still time to make up, Park Service. Keep the old names -- for the sake of the children.
McAuliffe Shuts Down Interview with Local Reporter: 'You Should've Asked Better Questions'
Landon Mion
Youngkin Campaign Responds After Being Accused of Taking McAuliffe's Words 'Out of Context'
Landon Mion
'Squad' Members Who Advocated for Defunding Police Spent $100K on Private Security
Landon Mion
Chicago Alderman: We Can't Afford to Lose Anymore Police Officers Over Vaccine Mandate
Julio Rosas
FDA May Allow ‘Mix And Match’ COVID-19 Booster Shots
Madeline Leesman
GOP Reps Introduce Bill Requiring Federal Agencies to Recognize Natural Immunity Against COVID-19
Madeline Leesman