Debra J. Saunders
|
Posted: Jan 07, 2016 12:01 AM
Share   Tweet
The opinions expressed by columnists are their own and do not necessarily represent the views of Townhall.com. 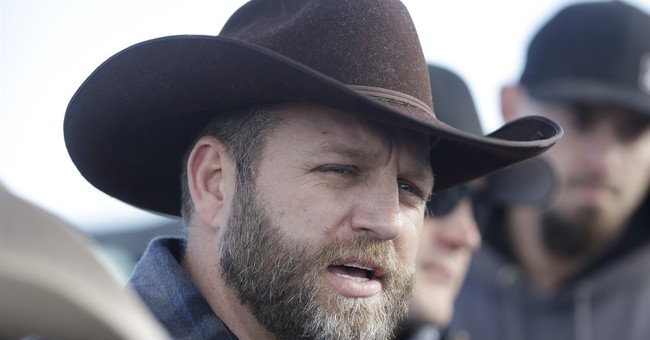 Weeks before Ammon Bundy and his pals showed up at the Malheur National Wildlife Refuge to protest five-year federal prison sentences imposed on two Oregon ranchers, a friend alerted me to the ranchers' story. Thanks to federal mandatory minimum sentencing laws, the government was sending Dwight and Steven Hammond, who had served earlier sentences, back to prison for the same crime. The draconian sentencing that warped the drug war had bled into home on the range.

I have no love for the Bundy bunch. In 2014, when Nevada cattle rancher Cliven Bundy (Ammon's father) began an armed standoff with the federal government over seized cattle, I wrote: "He was willing to start a 'range war' and risk the lives of his supporters in order to retrieve some cows. He doesn't feel he has to recognize a government elected by his fellow citizens."

The Oregon Farm Bureau has another beef with the Malheur Refuge occupiers: They have diverted "public attention and scrutiny away from the injustice that the federal government perpetrated on" the Hammonds.

In 2012, a jury found rancher Dwight Hammond guilty of arson for setting a 2001 fire that spread from his ranch and burned 139 acres of public land. Jurors also found his son, Steven, guilty of arson for the 2001 fire and a 2006 fire that burned an acre of public land. A federal judge sentenced Dwight to three months and Steven to one year and one day. Both Hammonds went to prison, served their time and were released.

That should be the end of the story. Except government lawyers had prosecuted the Hammonds under the Antiterrorism and Effective Death Penalty Act of 1996, which set a five-year minimum sentence for arson on federal property. They wanted to throw the book at the Hammonds. The presiding judge found the five-year minimum disproportionate to the crime. (I think the judge was right at heart but wrong on the law.)

Alas, Department of Justice lawyers appealed the reduced sentences and won. In 2015, a different judge ordered both Hammonds to prison to complete their five-year sentences. It doesn't seem fair -- or a smart use of tax dollars -- to throw Dwight Hammond, 73, behind bars for four years, nine months more.

The law is an ass. Kevin Ring of Families Against Mandatory Minimums noted that Congress passed the 1996 bill in response to the Oklahoma City bombing to punish terrorism aimed at public buildings. Ring sees the issue as one of "local control vs. D.C. control." The judge, a local, knew the facts of the case -- that the fires weren't terrorism. The community seemed satisfied with the outcome. But the federal one-size-fits-all model is merciless.

They're not really mandatory minimums, Ring told me. "They're not mandatory because the prosecution can make deals," and they're not "bare minimums" because Washington pols' idea of "minimum" is any reasonable person's idea of "severe."

What should good people do? Write your senators and congressional representative. Tell them to purge the books of minimum terms that are doomed to spawn injustice.