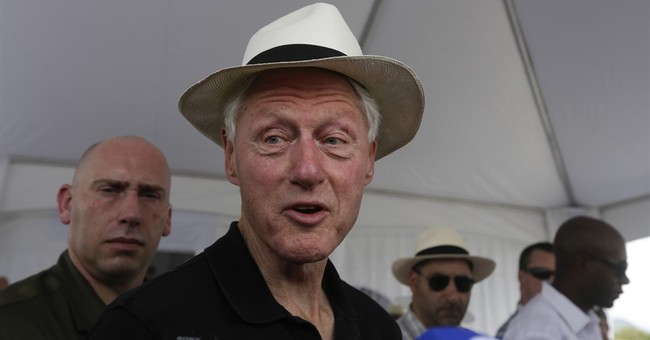 After lamenting Donald Trump's "penchant for sexism" last week, Hillary Clinton announced to supporters that her former-president husband -- her "not-so-secret weapon" -- will be hitting the campaign trail for her in January. Characteristically, in all capital letters, Trump struck back on Twitter, where he observed Bill Clinton himself has "demonstrated a penchant for sexism." The it-only-hurts-when-you-laugh part about this tiff is that The Donald and Bubba have so much in common.

Discussing the GOP front-runner's style with The Des Moines Register, Hillary Clinton lamented that Trump has "no boundaries" and "keeps pushing the envelope." But both men have degraded the public lexicon. Bill Clinton turned "Lewinsky" into a verb. Trump hit another low when he said the former secretary of state "got schlonged" in the 2008 presidential race. Wink, wink. The Donald tweeted that the term just means "beaten badly."

Both men seem to come out of central casting for "Mad Men." Despite their starring roles, they're both maestros at playing the victim card so ably that their followers are driven to defend their every misstep. They tell lies and get other people to justify their falsehoods. Clinton made up his own version of the meaning of "sexual relations" -- which spurred legions of Democrats to argue dutifully that oral sex isn't (sex). Trump made up seeing Muslims celebrating 9/11 in New Jersey. There's no video, no evidence that stands up, yet his groupies insist the tall tale is true. Clinton was absolved, supporters argued, because everyone lies about sex. For Trump, his falsehoods rang true because there were Muslims rejoicing somewhere else in the world.

Penchant for sexism? Where to begin? Trump has been known to brand women who aren't ornamental as "losers." When Fox News anchor Megyn Kelly asked him tough questions -- starting with his, er, penchant for calling women fat slobs, pigs and animals -- at the first GOP debate, Trump suggested that she had "blood coming out of her wherever." (Minions dutifully went on cable news to argue Trump didn't mean to suggest Kelly had been menstruating.) Trump seems to think that women exist to serve him.

Both men have had to pay to play. The billionaire paid divorce settlements to his exes. The former president paid tort damages and legal fees to mop up after his penchants. There was an $850,000 settlement in Paula Jones' sexual harassment suit. Then there's the affair with former intern Monica Lewinsky, which led to his impeachment. Clinton gave intentionally false testimony during the investigation, which led to his disbarment. Like Trump Republicans, Clinton Democrats always had excuses for their man's poor treatment of women. The list includes Hillary Clinton.

Trump shares another trait with Bill and Hillary Clinton: All three brazen it out through scandals -- and live to thrive another day. When opponents on the left or the right attack Trump, his fans take the approbation as proof that Trump is anti-establishment. He can lie. He can make faces during a presidential debate. They applaud Trump for being his own man.

Bill Clinton dragged this country through months of discord because he would not admit he had cheated on his first lady. Through it all, Clinton rose in the polls. Voters disapproved of Clinton's detractors more than his crude behavior. The wronged wife won a U.S. Senate seat in a state where she had not resided before Lewinsky. The thicker the muck the stronger the Clintons emerge.

So when Trump tweets that Bill Clinton is "fair game," my guess is that both Clintons are thinking, "Bring it on." Or do they recognize the peril in charging into battle against someone who plays shamelessness as ably and recklessly as they do?

When Biden calls a “lid,” Democrats wet the bed — and Trump starts mocking
Hotair
Biden Talks About Imaginary People, Says He’s Been in the Senate 180 Years and Has to Be Helped by MSNBC Host
Redstate