Seeking Sanctuary Sanity in US Senate 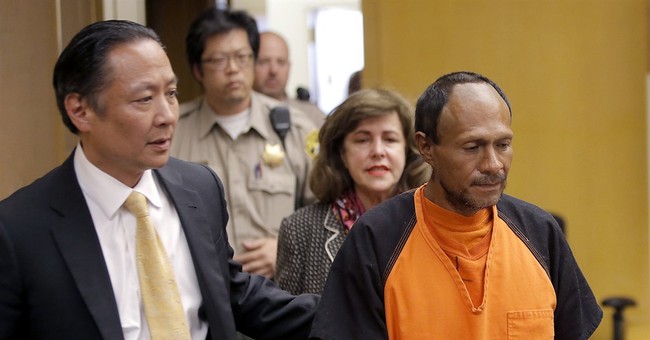 July 1 was one of those evenings when you feel blessed to be in San Francisco, especially if you are strolling along Pier 14. But every reader knows what happened next: A bullet struck Kathryn Steinle, 32, as she walked arm in arm with her father. Neither knew what had happened; the shot killed a vibrant woman -- for which an immigrant with seven felony convictions and five deportations has been charged. (Juan Francisco Lopez-Sanchez has pleaded not guilty.) On Tuesday, less than a month later, Jim Steinle found himself where he never thought he would be -- testifying before the Senate Judiciary Committee to advocate common-sense changes to sanctuary city policies to prevent crimes "by the hand of a person that should have never been on the streets of this country."

You might think that no parent could experience anything more painful, until you hear the testimony of Laura Wilkerson of Texas. In 2010, her youngest son, Josh, a senior in high school, was murdered by a 19-year-old immigrant who was here illegally. Before strangling Wilkerson, Hermilo Moralez beat her son so brutally that his head split in four places. According to the Houston Chronicle, Moralez was a citizen of Belize who had been charged with misdemeanor harassment earlier that year. A jury found Moralez guilty in 2013.

Sen. Chuck Grassley, R-Iowa, is working on legislation to block some federal funding to sanctuary cities that, like San Francisco, do not comply with federal immigration detainers. His bill also would set a minimum sentence of five years for illegal re-entry. Like Sen. Dianne Feinstein, D-Calif., who has urged San Francisco to cooperate with U.S. Immigration and Customs Enforcement, Grassley has a handle on the destructive consequences of sanctuary policies.

Would Grassley's bill stop another senseless murder? It wouldn't stop them all. And yet: If San Francisco Sheriff Ross Mirkarimi had handed Lopez-Sanchez over to ICE, the feds would have deported him, and he would not have been in San Francisco on July 1. To go by his rap sheet, however, Lopez-Sanchez would have been back in the U.S. in short order; he wouldn't stay in Mexico, and he couldn't stay out of jail. In 1998, Lopez-Sanchez was sentenced to 63 months for illegal re-entry. Within months of his deportation, he had crossed the border. Next: 71 months for illegal re-entry. Three months after his release, he was caught again. Next: 66 months and then a trip to San Francisco, where he was released. Thank you, City Hall.

First lobbyists erased any distinction between immigrants here legally and those here illegally -- with the argument that most people here illegally are otherwise law-abiding residents. OK. Does City Hall think it's doing these folks a favor by blocking the deportation of habitual criminals who can slip into their neighborhoods and disappear?

Wilkerson told the Senate Judiciary Committee: "Sanctuary city policies scream to the criminal element of illegals in this country: 'Come to Our Town, USA. We'll protect you from our terrible policemen. We'll protect you from these tough American laws.'" San Franciscans like to think that they are sophisticated. Sure, they are so smart they can tell the world: Immigrant felons, here is your sanctuary.