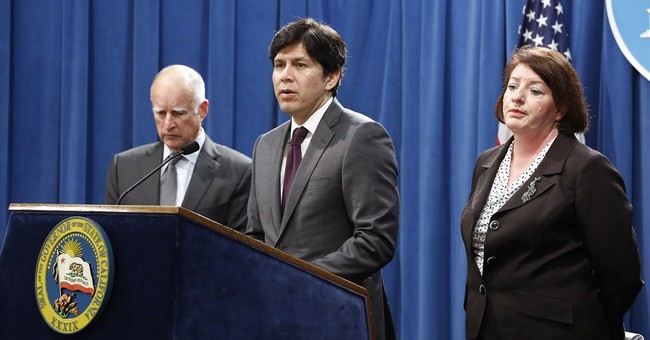 When SB 128, which would legalize physician-assisted suicide for terminally ill patients, passed the California Senate, supporters hailed the measure's success as a sign of its inevitability. And what Democrat in this heavily left-leaning Legislature wants to be on -- say it slowly -- The Wrong Side of History?

It turns out reports of the measure's slam-dunkedness were greatly exaggerated. Opponents of SB 128 expected the bill to sail through the Senate but then get mired in the Assembly. Sure enough, this week state Sens. Lois Wolk and Bill Monning, co-sponsors of the bill, had to pull a scheduled vote in the Assembly Health Committee and delay it until July 7 because, as the San Francisco Chronicle's Melody Gutierrez reported, six committee Democrats are not on board. Five are members of the Latino caucus. Ergo the new spin on the bill, advanced by Wolk, is that the Roman Catholic Church, in all its might, is leaning on its flock to kill the bill.

It's true; Los Angeles Archbishop Jose Gomez sent a letter to Health Committee members urging them to oppose the bill. He described sponsors as "well meaning" and said he understands people's fear of a slow, painful death. But, he wrote, "once we start down this path -- once we establish in law that some lives are not as valuable as others, not worth 'paying for' -- there will be no turning back."

But to suggest that the Catholic Church has an outsize power in a state that provides access to abortion on demand and enacted a law to accommodate transgender elementary school students -- well, that doesn't add up. Sacramento bucks the church routinely.

"When things start to go south on them, the first thing they do is put the blame on the Catholic Church," Californians Against Assisted Suicide spokesman Tim Rosales told me Wednesday. "They disregard any of the other opposition" -- such as disability rights organizations.

Black churches are organizing to fight the bill because of its potential impact on vulnerable populations, according to the Rev. Eugene Rivers, adviser to Bishop Charles E. Blake of the West Angeles Church of God in Christ.

There are two sides to this issue. On one side stand Californians who want to be able to kill themselves with the help of a doctor. These Californians already have the ability to kill themselves -- some 40,000 Americans die by suicide every year -- but they lack the ability to stage their final moments. And for that moment, they are willing to upend health care by turning doctors into death facilitators.

They have made Brittany Maynard, the former East Bay resident and terminal brain cancer patient who moved to Oregon last year so that she could use the state's assisted suicide law, the face of their crusade. They hail her for her courage.

On the other end of the spectrum, you can find Stephanie Packer of Orange County, who is living with end-stage lung disease. She's fighting to live so that she can mother her four young children, and she has found added meaning in speaking out as an advocate for vulnerable people -- disabled folks, old people or just plain plain people. She understands that when others say they want death with dignity, they are suggesting that fighting to live is not dignified.

"I don't think they would know what it means for the rest of the people who are sick and fighting to live and fighting for better care and better treatment and for options that are anything but death," Packer told me.

Sick people are vulnerable; vulnerable people don't need to be told they'd be better off dead.