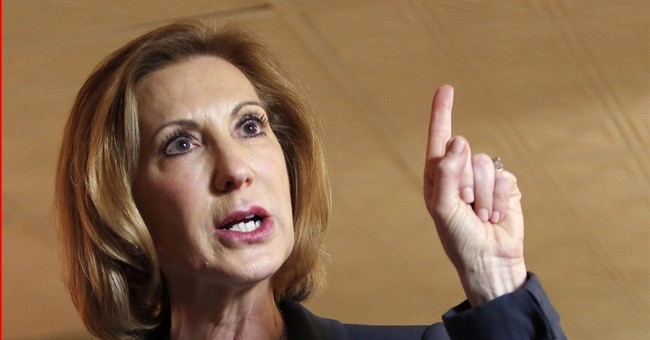 On Monday, former Hewlett-Packard CEO Carly Fiorina announced her entry into the 2016 GOP presidential primary. Fiorina skipped the standard ballroom announcement and went straight to people's computer screens to announce her decision, and then she followed up with interviews on TV news and comedy shows. It was a smart move, as she is a quick wit. When comedian Seth Meyers ribbed the Silicon Valley veteran for not buying carlyfiorina.org, Fiorina one-upped him by announcing she had just bought sethmeyers.org. And: "Actually, it was really cheap, Seth."

I don't think I've ever felt that I had as much in common with a candidate as I did when Fiorina ran to replace Sen. Barbara Boxer of California in 2010. That sounds ridiculous when you consider her barrier-breaking career. Fiorina became the first woman to head a Fortune 20 corporation in 1999. I am a lowly newspaper columnist. But we both started out working as secretaries. After college, our careers did not take a straight path. Unlike the case with stiff career pols -- think John Kerry or Gavin Newsom -- you do not imagine Fiorina running for high-school student council president while mapping out a strategy to win the White House. Ambition came later to her. Now it is in full force.

She is running for the White House at age 60 even though she never has won an election and she lost to Boxer by 10 points. Like a startup that never has made a profit, Fiorina is shooting for the moon.

She is burdened with a history of layoffs -- the kind of baggage that helped sink Mitt Romney in 2012. During the 2010 contest, Team Boxer slammed the former HP CEO for laying off 30,000 workers and outsourcing jobs. Fiorina did not apologize for layoffs that were agonizing but necessary. As she explained in her book "Tough Choices," HP needed to change if the company was to survive. She pushed for a merger with Compaq and eliminated redundant positions. When it was over, Fiorina claimed a "net-net" increase in HP jobs. According to PolitiFact, HP employed more workers (150,000) by October 2005 -- seven months after the board fired her -- than HP and Compaq employed together (148,100) before they announced their controversial merger in 2001.

As a woman, Fiorina can take on Hillary Clinton without fearing that she will come across as a bully -- as then-Rep. Rick Lazio, R-N.Y., appeared in 2000 when he walked across the podium and asked first lady Clinton to sign a pledge against soft money. Clinton won that faceoff.

But as a nominee, Fiorina, who left HP with a $21 million golden parachute, would be in no position to rail against the Clintons' abiding greedy streak.

In December, I wrote a column on Fiorina's failure to pay off a half-million in campaign debt from her losing 2010 campaign. It is beyond cheeky for a multimillionaire to run for president when she has left a trail of debt to her 2010 political team. Who wants a deadbeat for president?

Shortly thereafter, Fiorina, who now lives in Virginia, paid off her creditors. Good move, but too late to not leave a bad impression.

I don't see GOP voters nominating someone who never has won a race. Insiders assume Fiorina's running to win the vice presidency, a Cabinet post or a TV show. She says she's in it to win it. At least Fiorina will make the debates more interesting. How many times have you heard a candidate make this boast? "I got fired in a boardroom brawl."