District of Compensation, Just and Otherwise 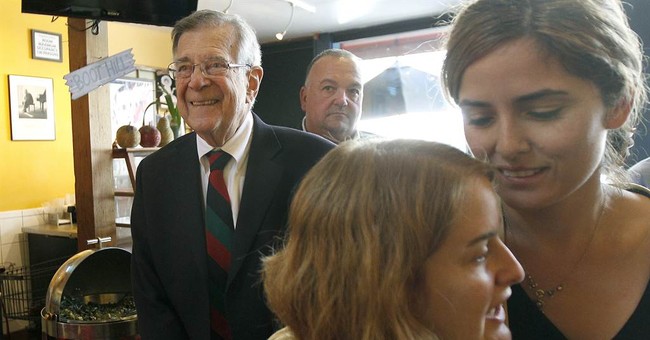 Trending
Pete Stark's name didn't come up Tuesday night at the Castro Valley Library candidates forum for the congressional district Stark represented from 1972 to 2012. The fact that nobody seemed to miss the California Democrat should serve as a warning to politicians who think they own their seats. So thought Stark, until fellow Democrat Eric Swalwell knocked him off his perch in 2012, thanks in part to California's top-two primary election.

This go-round, Swalwell is the incumbent. Termed-out state Sen. Ellen Corbett is his Democratic challenger. Against the odds, Alameda County GOP Central Committee Vice Chairman Hugh Bussell joined the race. The trio engaged in a civil exchange, agreed to some extent on most issues and didn't sling much mud.

In other words, the forum was a missed opportunity.

Only Bussell got in a dig when he asked, "Does Washington need more lawyers?" (Both Dems are attorneys.) Swalwell talked up his role in the bipartisan United Solutions Caucus. Corbett talked up her desire to inject "civility" and "respect" into Congress.

Problem: There is too much civility in her state Senate. In January, a jury convicted state Sen. Rod Wright of perjury and fraud. State Senate President Pro Tem Darrell Steinberg argued against expelling the popular Wright, lest a judge overturn the verdict. In February, the feds indicted state Sen. Ron Calderon on political corruption charges. Even state senators are presumed innocent unless proven guilty, but news reports presented a devastating portrait of a lawmaker on the take.

Then in March came the indictment of San Francisco's state senator, Leland Yee. Same presumption of innocence in a court of law, but not in the court of public opinion. As state Sen. Joel Anderson told me, once a case hits the courts "and they start rolling out the evidence, it's not about" the politician.

Wright, Calderon and Yee don't have enough respect for the Legislature to resign. Steinberg brokered a deal to suspend the three. It passed 28-1. Now the three stooges can't vote, and their constituents have no representation in the state Senate, but each legislator still gets paid $90,526.

Corbett voted for the deal. State Senate Republican Leader Bob Huff voted for it. State Sen. Alex Padilla, who wants to be California secretary of state, voted for it, too. He wants to represent California voters, yet he voted to pay three lawmakers who cannot represent their constituents.

Staffers confided to me that given the need for a two-thirds vote, the Steinberg resolution was the best doable deal. It keeps the Courthouse Three from voting and further embarrassing the Legislature. A GOP rump tried to expel Wright and failed. When a judge rules on Wright's case May 16, that should settle at least his fate.

At the Castro Valley forum, candidates discussed the need for campaign finance reform -- as if by fixing specifications, you can rid a system of corrupt sentiment. Corbett came out in favor of public campaign financing. Yee, who was a candidate for secretary of state before his indictment, also favors public financing -- so you know the notion is toothless.

But if there is no outrage at the political class when it wallows in corruption, then rules don't matter. In Sacramento, the Senate won't even expel a lawmaker convicted of fraud and perjury -- because he may get off on a technicality.

In 2012, Stark found out that he didn't own the 15th Congressional District. Voters were looking for better representation. In 2014, it's a different story. State lawmakers have learned they own paychecks for districts they no longer represent. When Wright, Calderon and Yee are gone, they'll hardly be missed. But while they're on the payroll, for some Californians at least, they will not be forgotten.