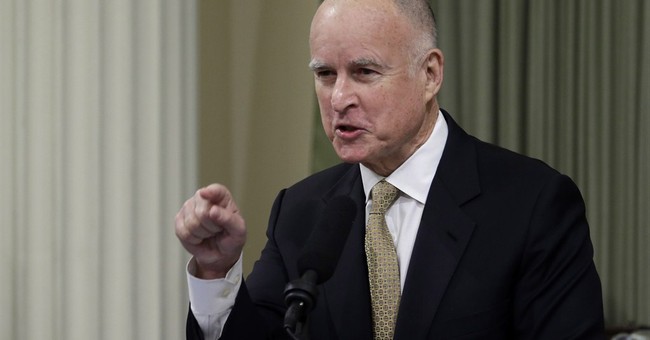 SACRAMENTO, Calif. -- Gov. Jerry Brown is in an enviable position. He delivered a State of the State address Wednesday that did not require hand-wringing about ugly shortfalls and painful cuts for public schools. As he prepares to run for re-election, he doesn't even need to announce that he is running for re-election. No Democrat dares challenge the 75-year-old incumbent.

Republicans know Brown's weaknesses. They don't blame him for the drought, but they do fault the state's onerous regulations for California's high unemployment; at 8.5 percent, California has the nation's sixth-highest jobless rate. Hence, there was criticism from the right. Assembly Republican Leader Connie Conway chided Brown for pushing -- albeit very briefly -- his high-speed rail scheme. Conway quipped, "I don't know what his Little Engine That Could is doing right now," in light of Brown's past State of the State reference to the children's book.

To date, two Republicans are vying to challenge Brown in November. One is former George W. Bush Treasury official Neel Kashkari, who had one big applause line during the speech Tuesday in which he announced his candidacy. The crowd loved it when he dismissed high-speed rail as the "crazy train."

In some ways, Kashkari feels like Meg Whitman, who lost so spectacularly to Brown in 2010. She raised a lot of money, which is Kashkari's focus. She had a spotty voting record. The first time she ran for office, she ran for California's top spot. Lots of people thought she'd lose, but she knew better than they did.

Kashkari bristles at the comparison. He is, after all, young and Indian-American and therefore likely to draw votes from minority and independent voters. "Whitman didn't give up a lucrative career and spend three years in Washington," Kashkari responded, as he did under Bush. But also, as a candidate, Kashkari has spent nights sleeping in homeless shelters. "I never saw Meg Whitman do that," said he.

Eye roll. That's one of those gimmicks also likely to turn off the GOP base. And Kashkari admits to voting for Barack Obama in 2008. Also, he didn't mention Brown once during his announcement speech. Why not? I ask, and he answers, "No particular reason."

Assemblyman Tim Donnelly doesn't have that problem. After Brown's speech, the tea party Republican was whacking Dao Gov, saying, "If we really have a surplus, he ought to give it back."

To differentiate himself from Kashkari, the happy warrior crowed, "It is crystal-clear that I'm going to pick a fight" with Brown.

Donnelly's problem is that he doesn't have many friends inside the Capitol. Ask longtime GOP legislative staffers whom they like for governor and you might as well ask them whom they like for a murder. They make clear that they don't like Donnelly; they fear that his lust for attention will reflect poorly on the GOP and turn off Latino voters.

And then they tell you that their friends are working for Kashkari.

Hennepin County Attorney: There Might Not Be a Criminal Charge Here
Cortney O'Brien
To Those Outraged Over Trump's Use of the Word 'Thug,' Someone Else Used it Too...
Cortney O'Brien
Fauci: A Second Wave of Coronavirus in the Fall May Not Be Inevitable After All
Guy Benson
Why the Coronavirus Outbreak Created a lot of New Gun Owners
Matt Vespa