In the Bay Area, Karl Rove Was Arresting 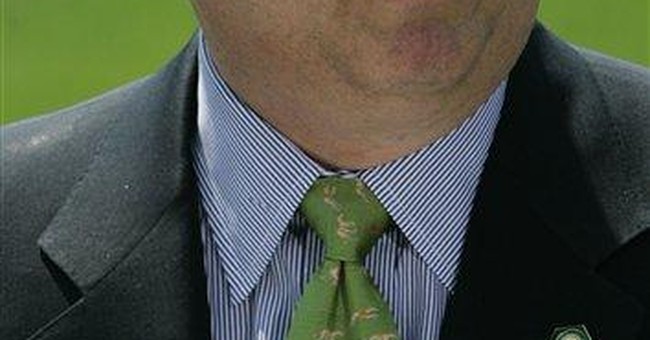 Karl Rove knew how to fire up an already fired-up crowd at a Contra Costa County Republican Party lunch in Lafayette, Calif., on Tuesday. While a handful of protesters outside waved an "arrest Rove" banner, he hit ObamaCare, crowed about the "delicious opportunity" 2010 offers in defeating Democratic Sen. Barbara Boxer, and picked local tea party activist Sally Zelikovsky out of the crowd to extol her activism.

There is another side to Rove -- a side that comes across in his new book, "Courage and Consequence: My Life as a Conservative in the Fight." I realize that many readers see Rove as a ruthless rabble-rouser of the right, but Rove wrote this book in part to establish that he does not strictly play to the GOP base. Or as he wrote in the book, "It's almost always true that a loyal volunteer base of activists wants to drag the contest in a meaner, uglier, more contentious direction."

As he chatted with journalists after the speech, Rove predicted 2010 will not be a "normal" election year. He sees big changes in California, where, for the first time since entering the union in 1850, the next census will not create a new congressional seat for California. "That is shocking," Rove noted. "People are voting with their feet here" -- by leaving.

Who will fare better in November -- a moderate or a conservative Republican? Doesn't matter. Rove answered, "It's better to be somebody who is talking plainly about their convictions in such a way that people say, 'You know what, they're going to do what they say.'"

While critics paint Rove as an evil genius, he told the audience a winning campaign strategy is not found in some secret book. It's work: Make a list, meet it.

Asked to describe tea party activists, Rove offered this admittedly gross oversimplification: Democrats, Republicans and independents, "who have been heretofore spectators and not participants" in politics and are "relatively unsophisticated." They tend to expect things to be done quicker than possible, but "that's the nature of every new political movement, and I don't fault them for that."

In light of a DailyCaller.com story about RNC staffers charging the Republican National Committee $2,000 for "meals" at what has been described as a topless, lesbian and bondage-themed nightclub in Los Angeles, I had to ask about RNC Chairman Michael Steele. Steele didn't club at Voyeur, but his bonehead staff approved the expense.

Rove said the responsible staffer should be fired -- which already had happened. He suggested that RNC rules mean the party is stuck with Steele through 2010 but did not defend him. The purpose of the RNC, Rove noted, is to "spend money on elections, not to spend money on jets and bondage clubs."

"Isn't it weird that we're even talking about this stuff?" Rove asked. Yes, I said at the time, but as I think about it, stories like this -- party biggies living large and ignoring their base's call for spending restraint -- happen so often that they don't seem so weird anymore. Just when the GOP could win back seats, Steele and his henchmen seem determined to blow it.

It's ironic, given Rove's salute to sincerity. No one is going to listen to Steele hitting Obama's big spending and figure, "You know, those Republicans are going to do what they say."