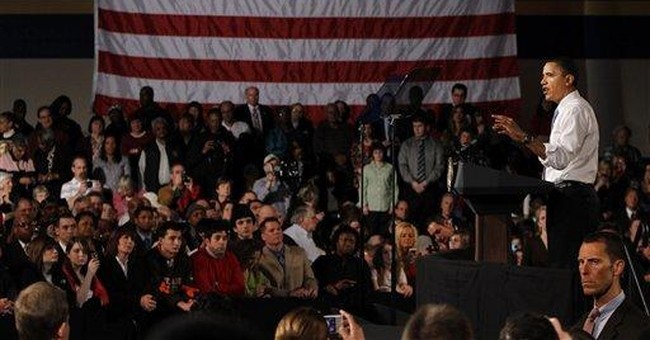 As a candidate for president, Sen. Barack Obama rejected "the politics of fear." Well, he won. So now he's playing the fear card to the hilt.

Monday, President Obama went to Strongsville, Ohio, to warn that unless his ObamaCare passes, middle Americans should be very afraid of the day when they (Fear No. 1) lose their job or income, then (Fear No. 2) fall seriously ill and then (Fear No. 3) receive the health care they need, but lose valued assets.

Obama's intended prop was Natoma Canfield, a 50-year-old cleaning woman and cancer survivor who dropped her private health care policy after Anthem Blue Cross raised her premiums some 40 percent to $708 per month. In December, Canfield wrote to Obama telling him that she was going to drop her insurance rather than lose the home her parents built in 1958. Alas, Canfield could not attend, as she since was diagnosed with leukemia and was in the hospital Monday.

The ObamaCare fear is not of being poor and not having health care. Medicaid covers the poor. Federally funded public health care clinics offer health, dental and medical care to the uninsured. (Google "free health care clinic" -- I found 29 within 11 miles of my home.)

The fear is not that if you are sick that you will be denied health care. Canfield is in a hospital, and according to Obama, "She expects to face a month or more of aggressive chemotherapy."

And the fear is not irrational -- as everyone knows that worst trifecta could befall many working Americans through no fault of their own.

The big-three fears also can descend upon adults who make risky choices. Canfield chose not to wait for ObamaCare, but to drop her insurance because she was afraid of losing her house. Now, sadly, she seems likely to lose it.

Of course, Canfield considered the increase to be rapacious. It is. It also is so large that it is bound to chase away the business of healthy individuals. Canfield's example points to the need for regulations to reform the private insurance market, which, opposed to the group health insurance market, is the source of almost every insurance horror story you have ever read.

And while I feel for Canfield, I cannot shake the feeling that to redress Canfield's problems, Washington will inflate costs of health care, despite Obama's claims that he will cut costs.

Add Congress to the mix, and all sorts of extra goodies -- like a student-loan package -- will drive the price tag even higher. There is no so-called crisis in America to which Congress does not respond without cooking up more pork.

And Americans are supposed to trust this bunch to curb costs? Buy me a T-shirt and call me stupid.

Do We Even Have A Republic Anymore?
Townhall
Prosecutor vows to bring charges against college students who rioted in Boulder, Colo.
Twitchy
BLM Racially Taunt and Scare Little Kids and Their Parents in Louisville, It Doesn't End Well for Them
Redstate
Portland Can Relax. The 'Enhanced Community Safety Team' Is on the Job
PJ Media