Jerry Brown Flies Below the Radar 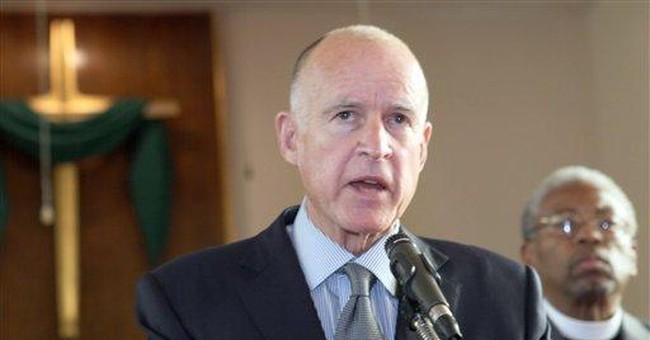 With the other name Democrats out of the race, Attorney General Jerry Brown basically has a lock on his party's primary election. That's good for Brown, who won't have to blow millions of dollars on a primary. But it's only good if Brown can win in November.

Brown is not without baggage. He's so yesteryear. At age 71, Brown hit his political peak decades ago when he was governor in the 1970s and early '80s. When Brown reminds Democrats of those bygone days (as he does frequently), even supporters start to wonder if they're trapped in a Nickelodeon rerun.

Brown earned the nickname "Gov. Moonbeam" because of his eccentricities. In a different year, Democrats might shrug off his Jerryisms as endearing. But after Republican Scott Brown's surprise win in Massachusetts, some partisans have come to believe, as progressive blogger Robert Cruickshank put it, "Jerry Brown IS California's Martha Coakley," referring to the Bay State's Democratic attorney general whose lead in the polls melted as her political opponent's star ascended.

While Republicans Meg Whitman and Steve Poizner have poured millions of their own money into consultants' purses, Brown has been running a mom-and-pop operation. He named his campaign manager last month. There's no phone number on his website. You e-mail staff by typing someone's first name at www.jerrybrown.org.

Gleeful that Brown has yet to announce his candidacy, the state GOP has begun a "Where's Jerry?" campaign. As spokesman Mark Standriff observed, "Democrats are spending millions in special-interest money (on an independent expenditure campaign) trying to motivate a guy who seemingly doesn't have the energy or the interest to walk down the hall and fill out a simple piece of paper."

Brown spokesman Sterling Clifford told me that Brown is reaching out to Democrats, but he's also focusing on doing his job as attorney general.

Besides, some veteran politicos see Brown as a political genius, who can run a quirky shoestring campaign, and still beat Whitman, Inc. Bob Stern, president of the Center for Governmental Studies, described Brown as "probably the smartest politician I ever worked for."

OK, but Brown has not faced a competitive race since 1982 when Pete Wilson beat him in a race for the U.S. Senate. Brown later won races for state Democratic Party chairman, Oakland mayor and state attorney general -- which means he's won more seats than the rest of us chickens -- but running for governor is different. And 2010 is not 1974.

Brown's strength is that he is not a predictable liberal. Alas, that's because his positions can be fickle and self-serving. As party chairman, he set a record in non-election year fundraising in 1989; by 1992, he was a money virgin who wanted to limit campaign contributions to $100.

Democratic campaign consultant Garry South, who worked on San Francisco Mayor Gavin Newsom's now-defunct gubernatorial bid, doesn't think the lack of a primary is good for his party. "All you have to do is go back to 1998, when the Republicans thought they were so clever when they cleared the way for (then-AG) Dan Lungren. We know what happened. Gray Davis came out of that primary campaign disciplined, and we were ready to go. Lungren ran a completely disorganized, undisciplined, message-less campaign."

Without a Demo ex machina, Brown will be the party's nominee. Maybe Brown will stand out as a uniquely unmanageable individual. Or maybe he'll stand out like a 5-pound cell phone.