Schwarzenegger -- What Might've Been 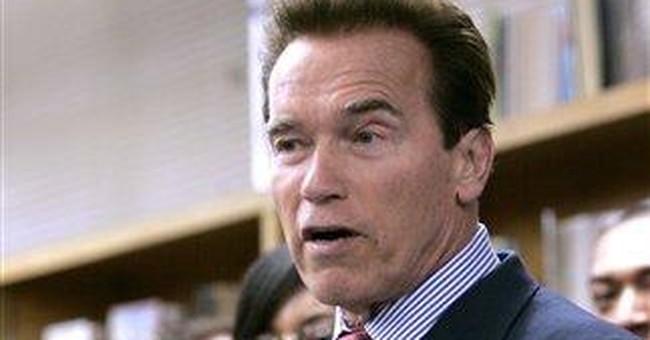 Mention Gov. Arnold Schwarzenegger -- you need only say his first name -- and many Californians respond with a long sigh, then with words like "squander" or "waste" or "missed opportunity." Those in the political class look at Schwarzenegger and see what might have been.

Close your eyes and think back in time six years. There was excitement as Schwarzenegger delivered his first State of the State address in 2004; international, Washington and Southern California media flocked to sleepy Sacramento in such numbers that Capitol workers had to put up a tent to contain the overflow. The larger-than-life action figure garnered more raw votes in the crowded recall race than ousted Democrat Gov. Gray Davis won in the anemic 2002 general election. He could not exactly pronounce Cah-lee-fornia, yet he bounded into office with so much force that even before his first State of the State, he revoked the car tax and stared down the Legislature until it repealed a recently passed law to allow illegal immigrants to obtain driver's licenses. Democrats held comfortable majorities in the Assembly and Senate, yet six years ago, many were terrified -- they lowered their voices when they talked about him -- at what the muscle man might make them do.

On the right, the big fear was that Schwarzenegger's need to be liked would keep him from doing what needed to be done. As it turned out, Schwarzenegger pushed for budget reform and a tough pension overhaul to end pricey defined-benefit pensions for new state employees. Sadly, once his plans met resistance, rather than regird his loins, the governator slinked off the set in search of a new script.

Wednesday, Schwarzenegger acknowledged that he starts the year facing a crushing $20.7 billion shortfall that will require painful cuts.

Throw in the fact that he has to work with a dysfunctional tax system and a Legislature dominated by hacks and zealots, and Schwarzenegger is back where he started six years ago.

Except that he relied on so many gimmicks to cook the books while in office that only real cuts are left. Or so I thought, until I heard Schwarzenegger say, "Today, almost 11 percent (of the General Fund) goes to prisons and only 7.5 percent goes to higher education." This was news to me, as the Legislative Analyst's Office 2009-2010 budget reported that the annual prison budget was $9 billion, while the higher education budget was more than $31 billion -- with $10.5 billion from the general fund. In order to reach Schwarzenegger's numbers, you also have to ignore the community college budget and fees.

Schwarzenegger talked of privatizing prisons -- a battle I can't see him finishing; last year, he signed a bill to improve the parole system.

Then Schwarzenegger really went wrong: He is now proposing a ballot measure to introduce yet another state spending formula -- the very mechanism that has made it nearly impossible to balance the budget -- to mandate that 10 percent of state funds go to higher education, but 7 percent to prisons.

Once again, even though his proposal will make it harder to govern, Schwarzenegger is looking for a piece of paper to do his dirty work. Sigh. What a wasted, squandered, missed opportunity.