Yes, Someone Has To Pay for Health Care 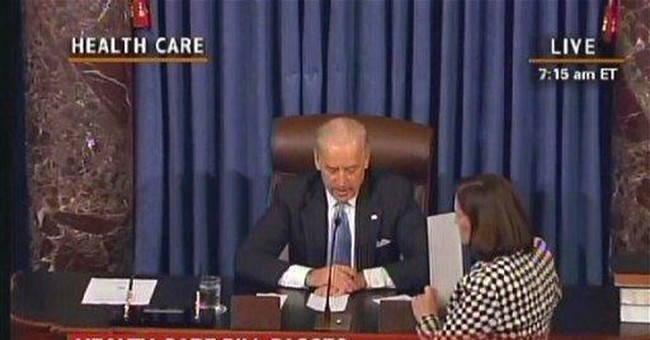 Most Americans already have health care insurance, but many middle-class Americans are afraid of losing what they have. The fear is especially profound when a person can work hard and steadily for years, only to find him-or-herself suddenly out of a job and without the means to pay for a costly illness.

There have been too many horror stories about people who responsibly buy personal health plans, only to find out that the plans don't really cover large medical bills. If a person gets a job that provides health care benefits, his or her current health problems may not be covered because they are pre-existing conditions.

Washington's catchphrase for the above situation has been, as the fiscal-watchdog group the Concord Coalition wrote in its recent report on health care reform, "doing nothing is not a responsible option."

The other half of the equation, however, is, as the report continued, "It does not follow, however, that doing anything would improve the situation." Alas, doing anything seems to be the one thing at which Washington excels.

Now, I've got issues with the bills passed in the House and Senate when Speaker Nancy Pelosi and Majority Leader Harry Reid kept tossing in benefits while promising to reduce the country's health care tab.

But my new fear is that during conference committee, lawmakers will throw in even more goodies and then, to make everybody happy, reduce the tax increases necessary to fund the plan. The closer they come to President Obama's 2008 campaign rhetoric -- universal health care that only rich people pay for -- the more red ink they will pass on to the next generation.

The problem with soaking the rich to pay for a health care plan? This is the fastest-shrinking tax imaginable when the economy sours. If California can serve any useful function in this debate, it should be as a warning to the dangers of over-relying on taxes on the rich.

Besides, as the Concord Coalition noted, broadly based taxes "spread the notion that all must contribute something for government benefits -- imposing an important breaker against 'free lunch' spending giveaways." Hence the coalition's support for the tax on so-called Cadillac health care.

While critics on the left complain that the Cadillac tax will squeeze union workers and the middle-class, I have issues with taxing those with health care benefits to pay for those who don't. Better to pass a value-added tax, but at least this excise eventually would make everyone pay for a universal benefit.

Concord Coalition Policy Director Josh Gordon believes, "Once people start feeling the cost of their insurance, they start getting concerned about premiums being too high." He added that if negotiators remove the Senate excise-tax and cost-control measures, the Concord Coalition would have to brand a final bill as "irresponsible legislation."

Note to anti-tax Republicans: If Washington passes a bill, someone has to pay for it. The only question is who, when and how much.

Note to soak-the-richers: You can't say that universal health care is a moral imperative, but only other people should pay for it.