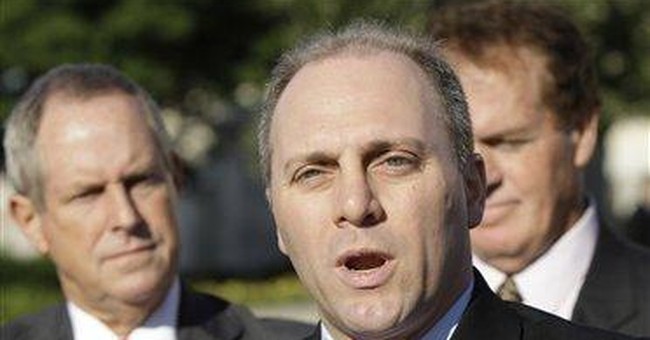 The Senate Health, Education, Labor and Pensions Committee health care bill includes a provision that would allow parents to keep their children as dependents on their health care policies until age 26. Not to be outdone, House Speaker Nancy Pelosi announced last month that, as Congressional Quarterly reported, the House bill "will allow young people to stay on their parents' policies until age 27."

Do I hear age 28? Why not 30? As long as Washington is giving away private health care coverage, why not eliminate the age cap entirely? The House plan enjoys the support of a new group, "the Young Invincibles," an organization, Pelosi explained "formed to get young adults behind the campaign for health insurance reform."

Eureka. Pelosi has found the way to get young adults behind health care reform -- have mom and dad (or their employers) pay for it. Of course young adults are jumping on the bandwagon.

A few years ago, Matthew McConaughey starred in the movie "Failure to Launch" about a thirtysomething adult who did not want to fly the familial coop. Now the Beltway wants to enable adults to live as their parents' health care wards for years after they've been emancipated.

Forget the old system that allowed adult children to remain on their parents' policies until age 19, or up to age 23 if they were in college, and hence financially dependent. The Washington measures would apply to adults up to age 26 or 27, whether they live at home or not -- as long as they are not married or parents. (And how long do you think it will take for politicians to eliminate those exclusions?)

To my surprise, the insurance industry believes that, if enacted, the failure-to-launch provisions "will have a minimal impact," according to Robert Zirkelbach, press secretary for America's Health Insurance Plans.

In part, the industry accepts this new definition of "dependent" because states have been passing laws extending the wonder years. According to Zirkelbach, Delaware and Oklahoma draw the line at age 18, but it's 22 for North Dakota; 24 in Indiana, South Dakota and Tennessee; 25 in 13 states; and, age 30 in four states, including New Jersey. Also, states have different criteria dealing with residency. The toothpaste is out of the tube; at least a federal measure would provide uniform standards.

As health care expert Steve Zuckerman of the Urban Institute noted, putting young adults on their parents' policies mean more premiums for insurers to cover a group that has pretty low claims.

Besides, a law that would make insurers cover healthy young adults is far less onerous than other congressional provisions, such as the requirement that health care providers cover cancer patients at no extra cost. Ditto restrictions on what they can charge older Americans.

Joshua B. Gordon of the fiscal watchdog group The Concord Coalition, sees "very minimal federal budget implications" -- as there are advantages to adding "young and healthy people" to the ranks of the insured. "It actually saves costs in a way," he added -- a point that has been made by elected failure-to-launch boosters.

It's true that 1 in 3 young American adults lacks health care coverage -- and Washington should try to pass laws to correct the situation. But don't tell me it's practically free. As Geoffrey Sandler testified for the American Academy of Actuaries last year, "Although young people age 19 to 25 generally have lower claims costs than other age groups, increasing coverage to this group will increase claims."

And don't act as if there is something noble about failure-to-launch provisions -- when they do nothing for young adults who have no parents or whose parents don't have health insurance.

"It's a way to get people to have coverage, but without the federal government picking up the tab," noted Zuckerman. But that does not mean there is no cost -- only that employers or employees will have to pay the added cost.

This is where a proposal by the Senate Finance Committee, chaired by Sen. Max Baucus, D-Mont., to sell low-premium, high-deductible "young invincibles" policies to young adults comes in handy. As Time Magazine reported, such policies "do not constitute full coverage." But if crafted correctly, Zuckerman told me, "the young-invincibles plans could be a good option."

And not just for the sons and daughters of the middle class. It makes no sense, but the so-called caring members of Congress want to avoid the path that paves strong incentives for young-invincibles to take charge of their health care. Instead, they're pushing the "failure to launch" model.