No Fireworks with Harmer, Garamendi 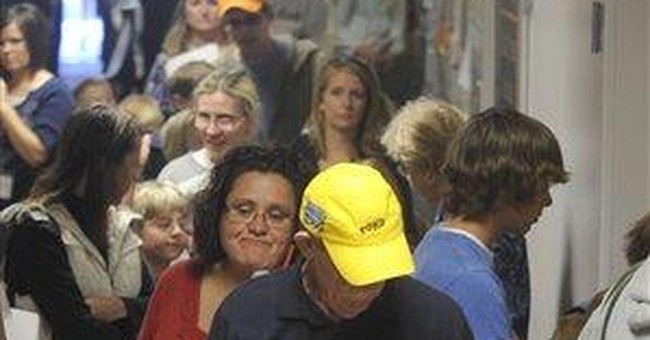 No journalist who has followed Lt. Gov. John Garamendi over the years could be surprised at his answer to the final question at Monday night's debate at St. Mary's College among candidates competing to replace Rep. Ellen Tauscher, D-Walnut Creek, in Tuesday's special election. When an opportunity for fulsome flattery presents itself, Garamendi does not miss a beat.

Garamendi's answer: "If you are the moderator, I'd have more than three." The three minor-party candidates gave earnest answers. As for Harmer, he agreed to at least three town halls if Vorderbrueggen moderated -- and the League of Women Voters sponsored.

Better still: Harmer then recognized the GOP's big image problem -- that talk is cheap. "We can't talk our way out of the problems we behaved our way into." He has found a way to reflect conservative values and pragmatism.

This summer, Harmer told The Chronicle that he had "no interest" in motivating the GOP base and "alienating everyone else." He meant it. At the debate, Harmer actually asked his more vocal supporters in the audience, who turned out in high numbers, to refrain from making noise during the questions and answers.

Conventional wisdom holds that Garamendi is a shoo-in to win on Tuesday. In the Sept. 1 primary, Democrats drew 63 percent of the vote, and they enjoy an 18 percent registration edge over Republicans. Garamendi garnered more votes -- 27,580 -- than Harmer's 22,582.

There's also the impressive Garamendi resume -- he's a former insurance commissioner, and was running for governor when Tauscher announced her resignation to fill a top position in the U.S. State Department. Garamendi is clearly fluent on the issues. His high name identification enabled him to win a hotly contested primary in a district where, as a nonresident, he is not a registered voter.

I thought Harmer would hammer Garamendi for sending out a mailer that, citing a 2004 Utah news report, said Harmer "supports offshoring jobs." The problem: The mailer quoted the wrong David Harmer. It was a sloppy mistake. But Monday night, both front-runners apparently decided not to swing wildly in the mud.

Instead they showcased their very different views on what Washington should be doing. Harmer said he would "respectfully challenge" President Obama to beef up the war effort in Afghanistan, as promised during the campaign. Garamendi contends, "We will not win this war militarily."

"It's a good time for America because we finally have a president who wants to get things done in the right way," said Garamendi.

In the other corner, Harmer wants to combat a trend he has seen in education -- "the rise of centralization and the fall of everything else."

Psaki Buries Her Knife in Biden’s Back
Townhall
BRO, take the L! Billy Eichner brutally REMINDED he told half the country NOT to see his movie as his 'Bros' meltdown continues
Twitchy
Ye and Candace Owens Sport 'White Lives Matter' T-Shirts, the Left Melts Down
Redstate
Molotov Cocktail-Throwing NYC Lawyer Offers New Cocktail in Her Own Defense: Vodka with a Dash of Islamophobia
PJ Media