No Thin Line Between Murder and Hate 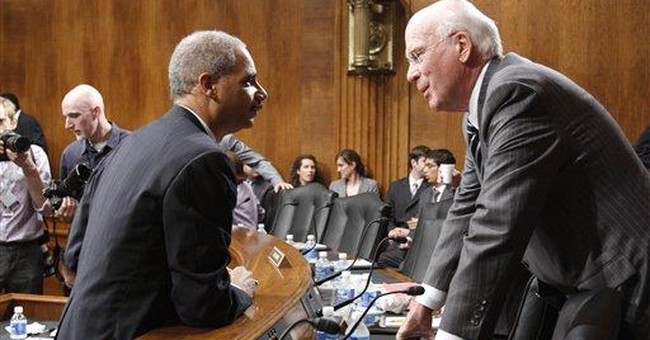 When the Senate passed a federal hate-crimes measure by a 63-28 earlier this month, Sen. Patrick Leahy, D-Vt., proclaimed, "This legislation will help to address the serious and growing problem of hate crimes."

I'm baffled. Washington passed the first federal hate-crimes bill in 1968 and 45 states have enacted hate-crime laws. This latest bill, the Matthew Shepard Hate Crimes Prevention Act, expanded the list of hate crimes -- which originally focused on attacks based on the victims' race, color, religion or national origin -- to include those targeted because of their gender, sexual orientation, gender identity or disability.

Forgive the question, because there's nothing glib about any crime of violence. The 1998 torture-murder of gay University of Wyoming student Matthew Shepard -- who was found tied to a fence, battered and shoeless in the cold -- was so cruel that it took Shepard three days to die.

Attorneys for one of Shepard's killers, Aaron McKinney, tried to introduce a "gay panic" defense, to explain why a crime that started as a robbery ended in death. The judge refused to allow the bogus defense and a jury found McKinney guilty of felony murder. To avoid the death penalty, his accomplice had pleaded guilty to the killing. Both are serving double life sentences.

It's hard to understand how a federal hate-crimes law could send a stronger message than life in prison. Or a stronger message than the response of security guards at the Holocaust Museum, who, after white supremacist James Von Brunn fatally shot guard Stephen T. Johns in June, shot Von Brunn in the face. With or without the Shepard act, Von Brunn could face the death penalty if convicted of first-degree murder.

Federal law allows for prosecutions only under narrow circumstances -- such as if a victim is at a public school, voting or serving as a juror. The Shepard act's most important expansion, however, is that it would allow the feds to prosecute hate crimes if, as supporter Attorney General Eric Holder testified, states lack the "capacity," "willingness" or "desire to prosecute these kinds of cases."

Sen. Ted Kennedy, D-Mass., claimed the measure he sponsored "closes the flagrant loopholes that for too long have prevented effective prosecution of these shocking crimes that terrorize entire groups of communities across America."

Yet Holder testified that he does not think "that there is a trend among the states or local jurisdictions in failing to go after these kinds of crimes."

So why change the federal law? After all, district attorneys are free to present bigotry as a motive at trial. When three white supremacists dragged James Byrd, 49, to death because he was a black man, Texas prosecutors won two death sentences and a life sentence for the 1998 crime.

Criminal Justice Legal Foundation President Michael Rushford noted that the problem with hate-crime laws is that they're "subjective." He believes prosecutors have a better chance prosecuting the crime -- not the motive. And these crimes are horrific enough.