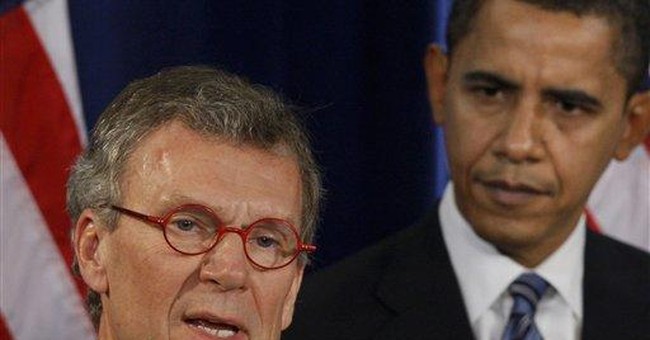 Americans now know that the "change we can believe in," which President Obama promised, means a taxes-optional administration. Treasury Secretary Timothy Geithner rode out the bad news about his failure to pay $34,000 in Social Security and Medicare taxes on income he earned while working for the International Monetary Fund, and still won confirmation. The man now in charge of the IRS says it was "an innocent mistake."

Remember that line -- in case you are audited.

Now come reports that Obama's pick to be both his health policy czar and secretary for Health and Human Services -- former Senate Democratic Leader Tom Daschle -- had to amend his tax returns and pay $140,000. Among other errors, Daschle forgot to pay taxes on a car and driver supplied for three years by, as he put it in a letter to the Senate Finance Committee, "a close friend."

Daschle wrote that he is "deeply embarrassed and disappointed by the errors that required me to amend my tax returns." Also: "My mistakes were unintentional."

Remember those words, too. There's just one problem with both Geithner's and Daschle's stories: If they really did not know that they were evading taxes, then they're stupid.

And if Daschle really thinks that media mogul Leo J. Hindery Jr. gave him a car and driver for three years out of friendship, and that "a gift from a good friend," as he put it Monday, would be exempt from taxation, then Daschle is too stupid to be trusted with health care reform.

White House Press Secretary Robert Gibbs told reporters Monday, "The president believes that Sen. Daschle is the right person for the very important job of ensuring that we cut costs, reform our health care system, and finally give the American people in health care the outcomes that they deserve."

According to the Wall Street Journal, Daschle told the Senate Finance Committee that he "had grown used to having a car and driver as majority leader and did not think to report the perk on his taxes." Which tells you that you don't want Daschle's mitts anywhere near the federal Treasury. Cutting costs? No. This is the guy you want when you're looking for someone to pass the Grey Poupon.

It wasn't that long ago that now-Vice President Joe Biden, when a senator, argued that it is "patriotic" for affluent Americans to pay higher taxes. Now that the Democrats are in power, they won't demand that one of their own pay up. Senate Majority Leader Harry Reid described Daschle's tax revelations as "a few little hiccups."

No wonder Rep. Eric Cantor, R-Va., and GOP whip, quipped, "It is easy for the other side to advocate for higher taxes because -- you know what? -- they don't pay them."

On a serious note, it is not in America's national interest to make it impossible for human beings, who err, to survive the ruthless Beltway gauntlet. But it also is not in the country's interest to hand incompetent (or venal) people the keys to the kingdom. After all that campaign talk about keeping former lobbyists out of policy-making, Obama tapped a former politician who cashed in upon losing re-election -- making $5 million over two years, including more than $200,000 speaking to the health care industry -- to be his go-to guy on health care.

I sure hope Americans did not elect another president who values loyalty over competence. In 2006, D.C. Democrats told voters that they wanted to upturn the GOP Congress' "culture of corruption." That lasted maybe two years. Maybe. Now it's business as usual. The Senate confirmed Geithner by a 60-34 vote. Ten Republicans supported him, while a mere three Democrats did not. "How can Mr. Geithner speak with any credibility or authority?" one of the three -- Iowa's Sen. Tom Harkin -- rightly asked.

Daschle is expected to slide through the Senate confirmation as well. Obama said Monday that he "absolutely" supports Daschle. Democratic senators will support him, and some Republican senators will, too. They are, after all, members of the same club.

The careful vetting of would-be officials in Obamadom that you read about in November? Well, for the right people, it turns out to have had a rubber stamp at its bottom.