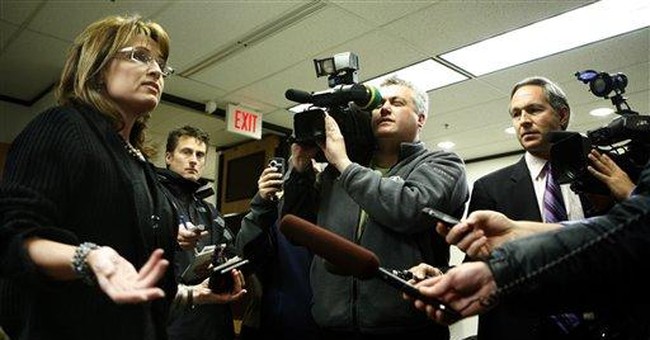 Whatever the intention of the anonymous leaker (or leakers) from the McCain campaign who spread nasty rumors about Alaska Gov. Sarah Palin, in the end they did not so much trash the image of Caribou Barbie, as they ended up tarnishing the public's perception of their G.I. Joe, Arizona Sen. John McCain.

It tells you everything that the Palin smear stories come from anonymous staffers. There is no documentation. There is no way to prove the rumors false. Think graffiti in a junior high school girls' room.

It started before Sen. Barack Obama won the election, when an unnamed McCampaign staffer called Palin a diva. Cable news then reported that a McCampaign aide called Palin a diva -- with "diva" in quotes. A "top McCain adviser" told Politico.com that Palin is a "whack job" -- more quote marks, from an unknown maligner.

Newsweek reported that when campaign strategists Steve Schmidt and Mark Salter went to Palin's hotel room, she greeted them clad in a towel. Schmidt later told the Washington Times that the episode is "categorically ... not true" -- but the graphic impression lives on.

You may have read that Palin did not know which countries are part of the North American Free Trade Agreement -- hint: There are three such countries and they're all in North America. I've seen Palin stumble during this race, but I do not believe that the Alaska governor was not acutely aware of a treaty that regulated trade with her next-door neighbor, Canada.

Don't take my word for it. CNN's Campbell Brown announced Friday that some unnamed McCain staffers "have been launching grenades at Palin and her supporters. Some of their allegations, we at CNN have found to be patently false."

I've talked to some McCampaign biggies and all denied being the source of this sleaze. All refused to talk on the record, lest they extend this sorry story.

OK. What is McCain's excuse? Perhaps when he appears on "The Tonight Show with Jay Leno" tonight, McCain will make a statement that puts the kibosh on this unnamed-sources pile-on. And it had better be good.

Because from where I sit, the view is of a campaign run by people who are so protective of their own precious backsides that they will sling all matter of mud -- including charges that are, as Brown put it, "patently false."

The longer McCain waits to refute the rabid rumors spread by those who want to blame Palin for the ticket's loss, the more his judgment appears suspect. After all, McCain picked Palin. If Palin was cartoonishly uninformed, if she was Gidget on the hustings, McCain does not look better. He looks worse.

Also, McCain looks worse for failing to control his own people.

The political press corps doesn't win any awards in this episode, either. Remember when the pack would not jump on National Enquirer stories about John Edwards' relations with Rielle Hunter and child -- because the story had not been nailed down? It seems that there is a different standard for Palin -- to wit, anything goes.