McCain Sticks to His Guns 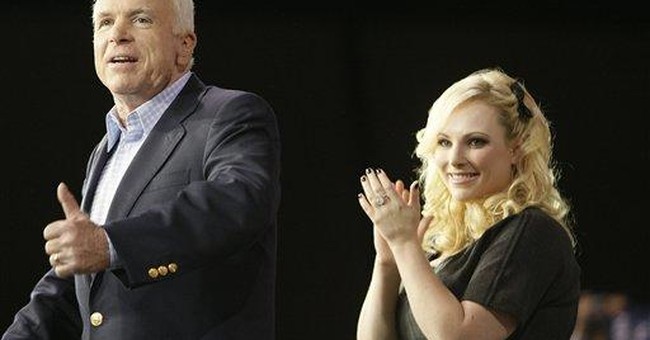 In an age of craven politics, John McCain is not afraid to swim against the tide. When Americans soured on the Iraq War and had begun telling pollsters they wanted out, McCain pushed for a surge of U.S. troops in Iraq. Today, casualties are down dramatically and Iraqi troops are defending Iraqis. Now the outcome of this war need not be that more than 4,100 American troops fell for a failed effort, which only confirmed Osama bin Laden's belief that America, when faced with losses, would cut and run.

In a political primary that had most Republicans playing to the GOP base, McCain pushed for an immigration reform bill that infuriated those primary voters. The experts said it would kill his nomination. He pushed for a second vote. Only when that second try failed did McCain then acknowledge that the federal government has to do more to curb illegal immigration before extending the path to citizenship to those illegally in America today.

I disagreed with McCain on the amnesty aspects of his bill, but I had to respect that he was determined to honor the drive of those who, if not particularly concerned about obeying the laws of their new country, worked hard to claim a stake in this melting-pot nation.

McCain's image as a Republican maverick is attractive. That's why Barack Obama has spent millions of dollars tarnishing it. On big issues, McCain has bucked the GOP establishment. He opposed the pork-laden farm and energy bills supported by President Bush (and Obama). Ditto Dubya's under-funded Medicare prescription-drug program. That's because McCain has been the too-rare-in-Washington Republican who saw it as his job, not just to pay lip service to stopping unnecessary spending, but to stop it.

I know that if he is elected, McCain will drive me nuts. For one thing, he'll do a better job of working with Democrats than Republicans because he believes in compromise. He can be weak on policy issues. When he talks energy or climate change, he talks on the surface, not in detail.

Many fault his campaign for operating on an ad hoc basis, but that's what happens when you have more talent than money.

The Palin pick? It energized a group of voters who have felt marginalized -- and McCain has to win before he can govern.

Is McCain "erratic"? So Team Obama argued after McCain suspended his campaign and went to Washington to push for the $700 billion Bush bailout measure. The McCampaign suspension failed to deliver enough GOP votes to pass a bill in the first House vote, so you cannot call it particularly successful.

And McCain's failure to return to Washington after the first presidential debate lacked follow through. In the end, the whole episode smacked of opportunism -- not befitting a senator who had put country first on immigration and Iraq.

And I, for one, want a president who looks to Iraq and recognizes his obligation to settle matters so that U.S. troops need not return there in our lifetime.

The next president will inherit federal spending on overdrive. The next president will have to work to balance, not only the federal budget, but also Social Security and Medicare accounts. Will he keep proposing more unfunded spending to spread the goodies around, or will he take on the difficult tasks needed to bring fiscal discipline to a hung-over Washington?

I have never seen Obama tell people they will have to pay more to fund his many new programs. First he trashes Bush for deficit spending and an "era of easy money," then he promises Americans more government programs and more tax cuts.

Now I think McCain is over-promising on tax cuts, too. But I have seen McCain brave the polls on Iraq, the Republican base on immigration and the GOP establishment on spending. He has shown himself to be willing to do the unpopular in order to accomplish the necessary. I don't always agree with him, but I always have to respect him.