David Williams
|
Posted: Jun 14, 2017 3:30 PM
Share   Tweet
The opinions expressed by columnists are their own and do not necessarily represent the views of Townhall.com. 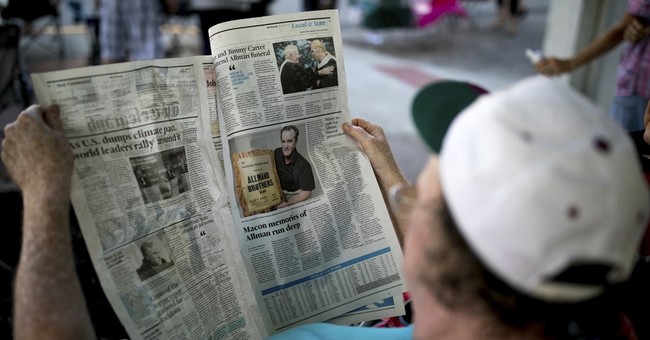 The Trump administration is touting the first serious tax reform proposal to come out of Washington in more than 30 years – one that will make filing much simpler and cheaper for the average American. Unfortunately, members of Congress are now exploring ways to dilute President Trump’s historic financial reform ideas with costly provisions that will not only wreak havoc on the economy, but also slow down the flow of vital information from community leaders to American families.

Chief among these brow-raising ideas is the imposition of an advertising tax, which will effectively bankrupt scores of local newspapers across the country. This will greatly limit consumers’ knowledge of important information that is going on within their communities.

Due to the explosion of the Internet, local newspapers have been starving for revenue. Free ad websites like Craigslist have decimated the biggest source of revenue that most papers have – the classifieds section, which comprises up to 70 percent of some local papers' ad revenue. These sites have cost the newspaper industry more than $40 billion in just over a decade, leading to the bankruptcy of many papers across the nation. This list has included local staples like the Rocky Mountain News, the Seattle Post-Intelligencer, and the Tucson Citizen. Both of Detroit’s papers – the Detroit Free Press and The Detroit News – narrowly averted foreclosure after engaging in major downsizing, cutting delivery to just 3 days per week.

This crisis entails much more than just a few important papers. In fact, a 2015 report from the Brookings Institute showed that the total number of newspapers per every hundred million Americans declined from 1,200 in 1945 to just 400 in 2014, while circulation per capita decreased over 20 percent.

Media mogul Rupert Murdoch, who once said that the revenue flowing from his newspapers were “rivers of gold,” now says that “sometimes rivers dry up.” Although there’s certainly nothing wrong with the Internet and cost-cutting innovation, it would be foolish for the Republican-controlled Congress to expedite the drying of these rivers through the smoking gun of government force.

Since the creation of the federal income tax in 1913, businesses have always been permitted to immediately deduct their full advertising costs, which is consistent with the First Amendment’s protection against regulating free speech. Now, an idea to tax advertising might change this century-long set-up if it’s given new life in the 2017 tax reform proposal.

Rep. Dave Camp (R-Mich.) planned to change advertising from a fully deductible business expense to one that is only half deductible. The rest would be remunerated over the course of 10 years, allowing the federal government to play with the revenue before returning the money back to its rightful owners. When asked, Chairman Kevin Brady recently acknowledged that there “may be a need” to adopt some of Camp’s old provisions. For the sake of America’s newspapers and millions of other businesses throughout the economy, let’s hope Chairman Brady was not including the Camp advertising tax proposal.

Thousands of papers are already on the brink of bankruptcy, and Republicans shouldn’t gamble with pushing more into insolvency.

The decline of national outlets is one thing – in most cases, online news suffices -- but the shrinkage of local papers is far more dangerous. Many areas only have one source of local news. When that one small paper goes bankrupt due to a draconian federal ad tax, there won’t be anybody to cover the local council meeting or report on communal crime. The Wall Street Journal or New York Times certainly won’t have the space, desire, or bandwidth to send in journalists for local stories. And so, many residents will be left totally in the dark about what is happening around them.

Thankfully, many congressional members recognize the absurdity of the ad tax. In fact, 124 members of the House, led by Reps. Kevin Yoder (R-Kan.) and Eliot Engel (D-N.Y.), recently signed a bipartisan letter to leadership that makes the case against it. “The potential for strengthening our economy through tax reform would be jeopardized by any proposal that imposes an advertising tax on our nation’s manufacturing, retail and service industries,” they said.

As these members know, taxing free speech would undoubtedly wreak havoc on the everyday lives of the American citizenry. For the sake of the economy and ease of access to information, one can only hope that House Ways and Means Committee Chair Kevin Brady will ensure that this senseless tax provision is relegated to the trash bin and not a part of comprehensive tax reform.