The Left’s Cultural Terrorism in a New Age of Enlightenment

David Thomas Roberts
|
Posted: Jul 01, 2020 12:01 AM
Share   Tweet
The opinions expressed by columnists are their own and do not necessarily represent the views of Townhall.com. 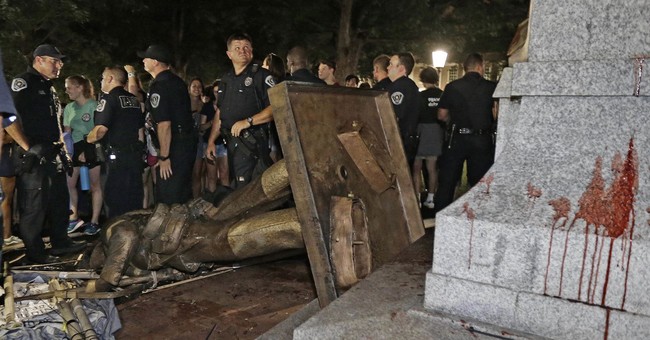 “A people without heritage are easily persuaded.” – Karl Marx, the Father of Communism.

Over the past five years as mayors, city councils, and state legislatures have removed Confederate monuments under the cover of darkness and with very little input of their communities, no opportunity was given to citizens via a referendum to vote to keep or remove the monuments. The Democrats, who criticize the Electoral College in favor of a pure democracy, don’t apply the same logic to historical monuments of which they don’t approve.

Democrats have had a strange bedfellow in their demise.  Conservatives and Republicans have voiced little public opposition for fear of being characterized as modern-day “racists.”

Gone are the days of political correctness, now morphed into a full-bore woke/cancel culture where nothing about America, her history or our heroes are safe.  These same politicians who sat silent are now suddenly horrified by the attacks on monuments to Lincoln, Jackson, Roosevelt, Columbus, Washington, Jefferson, abolitionists – and even Jesus Christ. While these titans of American history are defaced, hung in effigy, burned, and decapitated to the delight of “peaceful protestors,” 17 monuments to communist leaders in the U.S. remain intact.

In Seattle, a monument to George Washington is torn down by a ravenous mob, while a 7-ton sixteen-foot towering statue of mass murderer Vladimir Lenin remains intact. Here is the public statement on the Lenin statue by the city of Fremont:

The presence of this sculpture has evoked a wide range of responses. If art is supposed to make us feel, not just feel good, then this sculpture is a successful work of art. The challenge is to understand that this piece means different things to different people and to learn to listen to each other and respect different opinions. From an artist’s standpoint, all points of view are valid and important.

The Leftists apply no similar logic or tolerance for Confederate monuments or to any Founding Fathers who may have owned slaves at one time. Even a rumored quote or action that may have or may not have happened 50 or 100 years ago is cause for monument destruction.

In Dallas, the same city administration that has moved to remove and even demolish Confederate monuments quickly removed a statue to the iconic Texas Rangers based on a book that hadn’t even been released, written by a non-Texan and one whose literary merits were never debated. In this new Age of Enlightenment, the woke mob can only apply their current myopic viewpoint with brute force. Lenin, one of the vilest human beings in history, is by virtue of today’s identity politics acceptable, but Robert E. Lee, Andrew Jackson and Thomas Jefferson aren’t. Neither is a Texas Ranger or, for that matter, John Wayne.

The attacks on our monuments serves as a convenient dual attack on President Trump. He recently issued an executive order to protect monuments on federal property, which the mainstream media and even Fox affiliates reported was a move to protect Confederate monuments. However, of the more than 1,700 Confederate monuments that remain in the U.S., only a handful are on federal property and those that are reside primarily in Civil War battlefield parks. Trump’s edict will protect the Andrew Jackson and Abraham Lincoln monuments under recent attacks, but not the vast majority of monuments on state property.

The media and pundits ignore simple truths in the debate. Efforts to demonize the Confederate monuments as traitors who committed treason belie the fact exactly zero Confederates were tried for treason and Congress passed Public Law 85-425 in 1958 designating Confederate soldiers as United States veterans, including granting survivors and dependents the same veterans benefits as any other U.S. veteran. The next time we see a Confederate monument pulled down by a celebratory throng of revolutionaries, the fact is they are tearing down a statue of a U.S. veteran.

Today, the Leftist mobs and the appeasement politicians, despite generations removed, are apparently more enlightened than the generations that lived during these historic periods and years immediately after. The enlightened Leftists’ repudiation of America is based on her previous sins and their newly-acquired superior sense of ideals and morality with the goal of destroying America’s exceptionalism. And make no mistake, the attempted eradication of anything associated with Southern traditions from the word “Dixie” to “Gone with the Wind” is no more than a more sophisticated onslaught on President Trump’s strong support in Southern states (aka the Deplorables) to further try to cast him as a white supremacist.

Meanwhile, Democratic mayors have ordered local police to stand down as they helplessly and impotently watch the hordes of malcontents destroy art and history. Legislatures should move immediately to protect all monuments and governors should issue similar executive orders for state and local property monument protections.

It’s past time for all Republicans to become vocal on the subject and reject the racist narratives that will be hurled in their direction for speaking bravely, loudly, and publicly for preserving all monuments.

Like the Bolsheviks in the early 1900s and the ISIS fighters more recently, the destruction of historical monuments is no more than cultural terrorism.

In America and even in this new Age of Enlightenment where political correctness has been weaponized, a statue of Andrew Jackson has as much right to stand as one of Vladimir Lenin.