David Stokes
|
Posted: Mar 28, 2019 12:01 AM
Share   Tweet
The opinions expressed by columnists are their own and do not necessarily represent the views of Townhall.com. 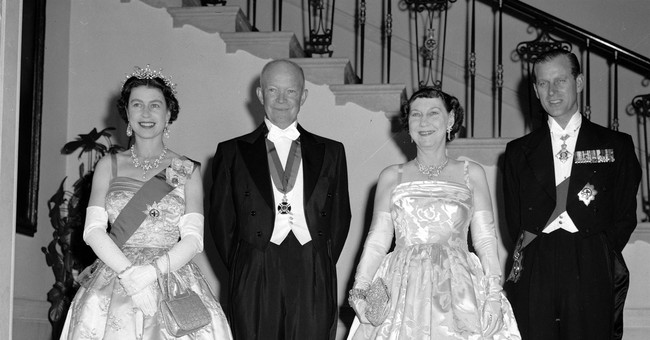 Fifty years ago, Billy Graham made his way to Walter Reed Hospital where Dwight D. Eisenhower, the great hero of D-Day and former two-term president of the United States, was experiencing his final hours. David Eisenhower, his grandson, described the moment: “Eisenhower had greeted Graham with a question about heaven and a talk they had had fourteen years earlier in Gettysburg. Emotionally, Graham repeated for Eisenhower what he had said to him before, reminded Eisenhower of God’s promise of salvation, and the ways this promise is revealed in scripture.”

On March 28, 1969, as the men of the family, including grandson David, formed a line abreast at the foot of the great man’s bed, standing at rigid attention, the 34th president of the United States died at 12:35 p.m.

The journey from his public service to that final passage of life began on a snow-filled day eight years earlier on January 20, 1961. The man who had provided steady and unruffled guidance to the United States of America during a turbulent time, likely found himself watching the weather every bit as warily as his sense of duty drove him to keep an eye on the volatile world itself. He had a trip planned that day—one he had been looking forward to for a while.

He was going home—to Gettysburg.

As John F. Kennedy took the oath of office and spoke eloquently about demands of the times, Dwight D. Eisenhower undoubtedly felt the burdensome power of that great office leave him and attach itself to the new man in charge. Another man sitting nearby and watching, absorbed in his own thoughts, was the outgoing Vice President, Richard M. Nixon, who had lost his race to succeed Eisenhower by a questionable whisper-thin margin.

No one knew it at the time, but within a few years a bridge would connect the Eisenhower and Nixon families as Ike’s grandson, David, and Nixon’s daughter, Julie, would marry and become a potential power couple tempered by scholarly grace and quiet dignity. David Eisenhower was President Eisenhower’s only grandson and the apple of his eye. The Maryland presidential retreat was even renamed for the lad—Camp David.

A few years ago, David wrote a fascinating book—one well worth reading to mark the 50th anniversary of the passing of a giant. It was titled, Going Home to Glory—A Memoir of Life with Dwight D. Eisenhower, 1961-1969. He wrote it with his wife, Julie Nixon Eisenhower.

Just 12 years old when the 34th president retired to the pastoral confines of his beloved Gettysburg, Pennsylvania, farm, David Eisenhower was uniquely positioned to observe what it was like to become a former president of the United States. With a university professor’s love for research—David is director of the Institute for Public Service at the Annenberg School for Communications at the University of Pennsylvania—he wrote a book that is rich in detail without sacrificing personal warmth. And along the way, we catch a behind-the-scenes glimpse at the final years of an authentic American hero.

For example, by the time former President Eisenhower was deeply rooted in retirement, he played a vital role in a famous political story, though his hidden hand was not publicly known at the time. It had to do with Richard Nixon’s defeat for Governor of California in 1962. The conventional wisdom was that Nixon couldn’t resist politics and thought being governor of California would position him for another run for the presidency.

But as David Eisenhower told me in a conversation several years ago, when he was gathering material for Going Home to Glory, he found himself surprised. “What I had found, looking into the record is Nixon was very, very ambivalent about running in 1962, and Dwight Eisenhower’s advice to run for [the] governorship was probably an important, if not the most important, element in Nixon’s thinking. Eisenhower’s logic was Republicans needed that governorship and Nixon was the kind of guy who could probably defeat an incumbent…so he pushed Nixon, gently, but pushed him.”

Interestingly, Richard Nixon never blamed his former boss—nor did he ever fully reveal Eisenhower’s behind-the-scenes role, such was his respect for Eisenhower. It was a respect shared by the overwhelming majority of Americans.

Another revealing glimpse has to do with former President Eisenhower’s desire to restore his five-star rank after leaving the White House. President Kennedy, who had a complicated relationship with his predecessor (there are many great details in the book about this dynamic), was puzzled at this and considered the request “eccentric.” Eisenhower, in effect, declined the title “Mr. President” in favor of “General.” Such was his sense of soldierly duty.

The final portion of Going Home to Glory deals with Mr. Eisenhower’s physical decline and final months living in Ward Eight at Walter Reed Army Medical Center. Guests came to pay their respects, including a newly elected president named Nixon. And by that time, the 34th and 37th presidents were somewhat related—by marriage—as David and Julie had tied the knot in December of 1968.

The general had offered his grandson $100 to get his hair cut for the occasion. David visited the barber, but the trim was not short enough to please granddad.

So he didn’t get paid.

That old saying about old soldiers never dying, but simply fading away, doesn’t seem to capture the essence of what David Eisenhower wrote in his memoir about his famous grandfather. What seems to fit much better is something written by the Apostle Paul to the Corinthians: “…from glory to glory.” (II Corinthians 3:18)