Appeasement and the Near-Sighted Visionary 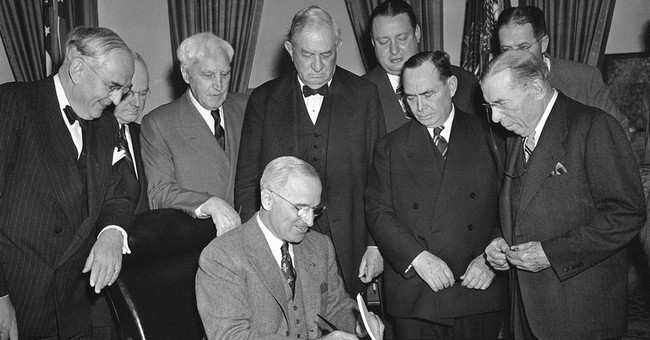 When the word “appeasement” was first identified with the foreign policy of a nation, it was on purpose. Now a term of derision generally applied to political leaders who seem to be clueless about apparent danger, it was never really a “bad” word until it became forever identified with foreign policy failures in Great Britain under the premiership of Neville Chamberlain. The word itself simply means to pacify or soothe. Most of us understand that there is a measure of this required for peaceful and civilized living and discourse.

But when appeasement met Adolf Hitler, it was manipulated, twisted, scorned and ultimately dismissed. Winston Churchill famously remarked “an appeaser is one who feeds a crocodile, hoping it will eat him last.” To paraphrase the words of Sean Connery playing a character in the 1987 movie The Untouchables, Mr. Chamberlain had brought a paper knife to a gunfight in Munich.

While Chamberlain was staking the future of his nation on appeasement as official policy, Harry Truman, a freshman U.S. Senator from Missouri, kept his eyes on developments in Europe. Great Britain seemed to be determined to feed Europe to the Nazi crocodile one bite at a time. Truman knew and noted that the policy of appeasement was not just in play over the fate of Czechoslovakia, but it also had another deadly and dreadful application—one that would impact the Jewish people.

The British government released a White Paper on the issue of Palestine in May 1939. Since the 1917 Balfour Declaration, and during the years of the British Mandate, they had been largely supportive of Jewish migration to Palestine and the general idea of a Jewish state there. The 1939 policy statement changed all of that. It advocated severe limitations on Jewish immigration to Palestine at a time when European anti-Semitism was reaching critical mass.

By the way, the 1939 British White Paper was a big hit in Berlin.

Churchill saw it differently. He spoke to the House of Commons on May 22, 1939: “as one intimately and responsibly concerned in the earlier states of our Palestine policy,” and insisted that he would not “stand by and see the solemn engagements into which Britain has entered before the world set aside.”

Senator Truman, who was a long way from being well known or even noticed, weighed in on the matter and his words were inserted into the Congressional Record:

“Mr. President, the British Government has used its diplomatic umbrella again… this time on Palestine. It has made a scrap of paper out of Lord Balfour’s promise to the Jews. It has just added another to the long list of surrenders to the Axis powers.”

The road to the Holocaust was paved with appeasement.

Yet here we are decades later faced with the ominous resurgence of appeasement as foreign policy.

By the end of World War II, that once obscure Senator from Missouri was President of the United States. The world had emerged from a global conflict and also knew the horrors of the Holocaust, the bitter fruit of Anti-Semitism enabled by appeasement. And before long, Mr. Truman was faced with a decision about the region he had talked about in 1939.

In a singular act of political courage, and against the advice of men he admired very much, President Truman officially recognized a new nation in Palestine—a homeland for the Jews—just eleven short minutes after David Ben Gurion announced its birth in Tel Aviv.

Truman signed a single typewritten page. It is on display these days at the Truman Presidential Library in Independence, Missouri. It shows the President’s cursive corrections, including a wording change from “new Jewish state” to “State of Israel”—as well as the directive: “Approved May 14, 1948.”

This was a bold step for the American president, one opposed by powerful members of his own administration. Secretary of State George C. Marshall was so strongly opposed that he told his boss that he might not vote for him that November.

But Harry Truman was a savvy politician with an appreciation for history—ancient and recent. He never attended college, but he was well read. As a young boy, when chronic near-sightedness kept him from some more strenuous activities, he would lose himself in books.

According to historian Michael Beschloss, among his favorite books was a “gold-trimmed, four-volume history called Great Men and Famous Women.” One of the men chronicled was Cyrus the Great, King of Persia (modern day Iran), who enabled the Jewish people to leave their exile and go back to Palestine. That’s right, a pro-Israel Iranian leader. It is likely that this ancient story was on Truman’s mind as he dealt with the Jewish-Palestine issue. More recent history, particularly the events of the late 1930s, also influenced his presidential decisions.

President Truman had an incredible sense of the past’s power to influence the present and future. The internal world of thought, nurtured as a child through the reading of history, was very present in the man.

Shortly after leaving office in 1953, while visiting a Jewish school in New York City, he was introduced as “the man who helped to create the State of Israel”—Truman interrupted and said: “What do you mean ‘helped create?’ I am Cyrus! I am Cyrus!”

As in the days of Truman and Churchill, so it is today—some see appeasement as a panacea. But wiser people know better.

The world needs another Cyrus—or at least a Truman.