The Stimulus: Yes We Can't 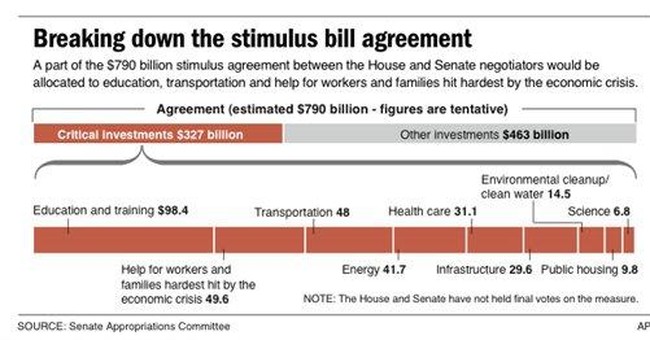 Addressing the Democratic Party faithful last week in Williamsburg, Virginia, President Barack Obama brought the house down with a now-famous bit of political sarcasm about the stimulus package. The bill is now ready for the president’s signature, having emerged from the congressional laws-and-sausages-making mill. The specialty is pork sausage, by the way.

During his remarks that night, Mr. Obama mocked some who have been characterizing the package as merely a “spending bill.” He asked, “What do you think a stimulus is? That’s the whole point.” Then as the audience burst into laughter and applause (one could almost hear a Ralph Kramden-like “Har Har Hardy Har Har”), he added, “No, seriously, that’s the point.”

These days it is accepted as gospel that government spending, spending, and more spending is the cure for America’s economic ills. Accordingly, still basking in the glow of an impressive victory last November, Democrats have gleefully used the cover of the current crisis to exact generational revenge on the politics and policies of those who decried big government in the past. Leaders such as Ronald Reagan and even, ironically, Bill Clinton who famously said the “era of big government is over” during his days in the Oval Office.

The president himself talked during his inaugural address about no longer wanting to define government as too big or small. He promoted a new standard; that being simply: “Does it work?” Well, if more is inherently better, then we are on the threshold of a golden age promising 17 chickens in every pot, with the pot itself made of gold, and a colorful rainbow not too far away. Bear in mind that rainbows are all image; no substance.

Is unleashed and unprecedented government spending a stimulus to the economy as a whole, or does it just grow the government? Is the real plan for all of us to become more and more addicted to the toxic drug of statism? When Gerald Ford traveled around the country giving speeches as a congressman, vice-president, and ultimately president, one of his few memorable lines (he was not known for his oratory) was that “a government big enough to give you everything you want is a government big enough to take from you everything you have.”

Okay, so Ford was no Lincoln – but he did have a point. We all know the phrase “it comes with strings attached,” meaning that there are times when receiving something can have dire, if sometimes deferred, consequences. Well, those stimulus strings are beginning to look a lot like piano wire.

I think all the talk of “doom and gloom” is not misguided; it’s misdirected. A catastrophe will not result from a failure to inject a trillion dollars of government spending into a struggling economy. The thing we should really fear is the fallout from a toxic overdose of federal dollars. If our economy actually survives the euphoric rush of a stimulus-driven high, it will just be a matter of time before an emerging majority of strung out neo-socialist junkies will be clamoring for another fix.

The fact is, there is no empirical evidence that massive government spending stimulates anything except massive government growth. Is anyone noticing that while unemployment nationwide is now at well over 7% - with some of the harder hit areas at twice that – that the bedroom counties around Washington, D.C. report jobless rates ranging from 1.9% in Arlington County to 2.1% in Fairfax County?

Guess what the big industry is in the area? Really, can you guess?

As Mitt Romney has been talking a lot about recently, the Obama spending bill would stimulate the government, not the economy. No matter how you view economics, it is simply true that funding for new and exponential government spending has to come from somewhere.

It can come via taxation. In the best-case scenario, the gain to the taxpayer is theoretically equal to the tax paid – which begs the question, why take it just to give it back? Of course, most taxpayers won’t get it back dollar for dollar because of “overhead” (or in the government’s case “big giant head”) and the fact that so many really nifty programs will be funded. Not to mention, the earth will cool down dramatically.

Additionally, in a “we’ll get the money from taxation” model, it’s hard to envision an expense so unprecedented to even be possible without tax increases coming from somewhere (better: someone). And there seems to be near universal agreement that raising taxes in a recession is just plain dumb. Therefore, congress will probably raise our taxes in the near future.

Another way to finance the mother of all stimulus packages is to borrow the money. But this would dramatically increase the demand on the lending mechanisms in the country; this at a time when credit is already pretty much paralyzed. One result of this could be a return to rising interest rates - certainly no stimulus there. The Japanese government tried this in the 1990s, yet the economy did not recover.

The third way for government to find a trillion or so dollars to save us all would be to create money. They could do so “ex nihilo”– from the Latin meaning “out of nothing.” It’s a term often used by those of us who believe God created all things. Pardon this awkward insertion at a time when all amoebas mark Darwin’s 200th birthday. However, absent any U.S. department of alchemy (wait - that would be making something out of something – oh well, you get my drift), the best the government could do is to print more money, possibly finding a place to put “yes we can” on the new currency.

Most economists admit that just printing money would be dramatically inflationary. No stimulus there, either. At any rate, government spending – at best - tends to redistribute existing purchasing power as opposed to creating new purchasing power. Joe the plumber is looking smarter all the time.

Here’s a better idea – one that I know would really help working people in this country, as well as stimulating businesses to hire new workers. Simply declare a 90-day moratorium on the payroll tax, thus putting real money into the hands of those who earned it in the first place. Don’t take it away and then try to find clever ways to trickle it back. Leave it with “we the people.”

Someone might argue, “But what will government do? How will they fund all the programs?” Well, they were going to have to borrow money in the first place for the stimulus. Three months won’t break the bank – heck, the government has wasted that much of our money on wacky ideas before. But it might just be enough time for American workers to start really stimulating the economy themselves. Novel idea, huh?

It would save trees (no government checks), cut down on electricity (for electronic fund transfers), save money for the post office, and create real jobs the way real jobs are created – by private businesses. And if it meant that some federal employees would have little to do during the duration of this experiment, maybe they could work on the nation’s infrastructure – or the area around the Jefferson Memorial.

There might be a downside, though. If it worked too well, many current members of congress might find themselves out of work in two years. That would be just sad.

Speaking of Thomas Jefferson, I am sure some reading this are preparing to correct me about that Gerald Ford quote – thinking it goes back to Jefferson. But it really doesn’t. Here’s one that does, though, from his inaugural address on March 4, 1801:

“Still one thing more, fellow citizens: a wise and frugal government, which shall restrain men from injuring one another, which shall leave them otherwise free to regulate their own pursuits of industry and improvement, and shall not take from the mouth of labor the bread it has earned. This is the sum of good government…”

One thing for sure - the number of Democrats in America using this Jeffersonian nugget during recent Jefferson-Jackson Day festivities was less than the number of Republicans voting for the so-called stimulus package. Or, put another way, roughly the number of legislators who actually read the nearly 1,100-page bill before voting our future away.