It Didn't Start With Palin 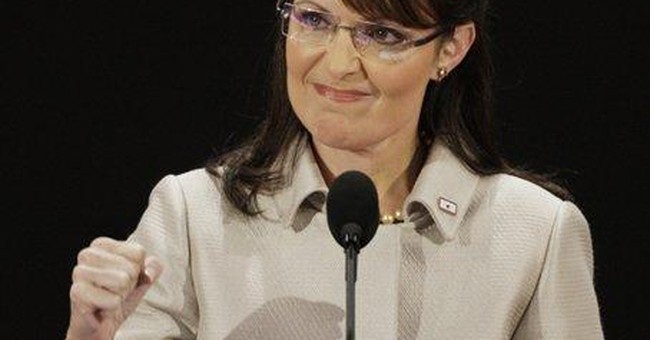 Sarah Palin hit a home run with her acceptance speech at the RNC Wednesday night.  She was poised, confident, eloquent, witty, and her delivery matched that of any politico or communicator in recent memory.  Fred Barnes of Fox News said it best, in his post-speech analysis – “she has a gift.”

A star has been born.  But this does not mean it will be smooth sailing for America’s top hockey mom.  Every success will bring new scrutiny and what one mostly-forgettable former Vice President once referred to as sniping from “the nattering nabobs of negativism.”

It has become an all-too-familiar and sadly predictable pattern in modern life – the media feeding frenzy.  It starts with the news of someone being elevated to a position of prominence and potential national leadership, but quickly enters a period of bipolar analysis and coverage.  The story goes viral.  Talking heads giggle with the kind of glee reminiscent of the witch on the Wizard of Oz gloating over plans for her “little pretty.”

The saga of Sarah Palin is, of course, the latest example of this.  Before her came all those good, bad, average, and not-so-average people who found themselves tried by similarly ferocious fires.

Anyone doing a background-check these days on a potential major political candidate should do so with just one eye on the actual office being considered.  The other eye should be on the political butterfly effect. What storm could emerge from this?  And anything and everything can be grist for the media mill in our age of 24/7 News.

Long before Sarah Palin was born, there was a man named Thomas Eagleton who was drummed off the Democratic ticket in 1972.  Years later, J. Danforth Quayle was famously dubbed to be “no Jack Kennedy.”  And who could forget (ok, probably a multitude of people who aren’t political history wonks) commercials featuring a laughing voice for thirty seconds with just word on the screen – Spiro Agnew.  Vice Presidential nominees have for years been easy targets.

And it all began with a man named Nixon.

The year was 1952 – often noted these days as the last time the political planets lined up as they have this year.  We were faced with two major party tickets absent anyone from a prior administration.  But what is often missed is the other connection between then and now.  We also saw that year, for the very first time, a public media circus over a Vice Presidential nominee.

Richard M. Nixon was a rising political star when party leaders worked behind the scenes to get Dwight D. Eisenhower to put the thirty-nine year old senator from California on the Republican ticket.  His mentors and fans were people like Thomas Dewey (two-time presidential nominee).  Though he had served but two terms as a member of the House of Representatives, and had been a U.S. Senator from California for a mere eighteen months, Nixon was perceived to be the perfect bridge between the Eastern-Establishment wing of the GOP and old-guard conservatives, led by “Mr. Republican” – Senator Robert Taft.

All was proceeding according to plan, with the Eisenhower-Nixon ticket leading in the polls after their Chicago convention.  That is, until a rumor that had been percolating in the early days of September burst into full public boil with a New York Post headline: SECRET RICH MAN’S TRUST FUND KEEPS NIXON IN STYLE BEYOND HIS SALARY.

Ultimately, even those who opposed and widely-criticized Nixon, writers such as Tom Wicker, had to admit that, “no evidence ever justified any part of that headline, because the $18,000 fund (scarcely a vast sum even in 1952) was public, audited, reserved for legitimate campaign expenses not chargeable to the taxpayers, and had been raised from donors of no more than $500.00 each.”  But it took awhile for the truth, not to mention reason and fairness, to catch up with a media-swollen appetite for scandal.

For a period of ten days, the nation read about the story on front pages of newspapers, heard about it on the radio, and even saw coverage on that relatively new device finding its way into millions of American homes – television.  It was the political story of the year.  And soon – even diehard Republicans were jumping on a fast-moving “dump Nixon” bandwagon.

Mr. Eisenhower was largely noncommittal and remained above the fray.  He had not been all that involved in the Vice Presidential nominee selection anyway.  The general loved to delegate.  Political reporters traveling on his train voted 40 to 2 that Nixon should be dumped, prompting Ike to tell them that it was important that his campaign be “as clean as a hound’s tooth.”  That made good copy – even in the days before sound bites.

Political opponents were, of course, gleeful.  The Democratic ticket of Adlai Stevenson and John Sparkman certainly looked forward to closing the gap in the polls, maybe even overtaking Ike and Dick.  The brewing Nixon scandal was a stroke of good fortune.

As the story morphed into a perfect political storm, it was decided that Richard Nixon should deliver a televised speech making his personal case to the American people.  He broke off campaigning in Portland, Oregon on Monday, September 22nd, and flew to Los Angeles. Sitting on the plane, he reached for some note cards in the seat pocket in front of him.  They were advertisements for the airline - with some room in the margins and on the back.  He began to jot down some notes.  He scribbled random thoughts such as, “Republican cloth coat” and “common people” and “lay out for everyone to see my entire personal financial history.”

He spent the next day preparing for the speech of his life in his suite at the Ambassador Hotel.  What he would have to say would forever define him.  It would also change the face of American politics forever.  Telegrams and calls were coming in from all over – words of support – some of doubt.  When he had finally heard from Eisenhower the day before, support from the general was tepid at best. Nixon was, no doubt, under great pressure.

In fact, just an hour before Nixon left the hotel for the 20-minute ride to the NBC studio, Governor Dewey called to tell him that it was the collective opinion of party leaders around Eisenhower that the Vice Presidential nominee should end his speech by resigning from the ticket.  How’s that for a way to psyche a man up before a major speech?  Oh, and Dewey implied that Eisenhower felt the same way, too!

Against the backdrop of monstrous political turbulence, and with his own emotions no-doubt in turmoil, Richard Nixon entered the El Capitan Theatre in Hollywood the evening of September 23, 1952 to make history.  All 750 seats, usually filled with audiences watching “This is Your Life” or “The Colgate Comedy Hour,” were empty.  Nixon sat at a desk and prepared his thoughts looking over his five pages of notes – no script, no cue cards.  He preferred it that way.

The speech Nixon gave that evening has been analyzed and criticized in the decades since the famous broadcast.  More than sixty million Americans watched that night – that’s nearly fifty-percent of all those who had access to a television.  It was, by all accounts, “the largest witness to a political speech in world history.”

The candidate waxed personal.  That was rare in those days.  Now it is common for someone running for office to tell personal stories – back then, not so much.  Recently, even the Democratic nominees have talked about how Sarah Palin has a “compelling story.”  Such narratives are par for the political course today.  And it was Richard Nixon – whatever one thinks of him and his legacy – who paved the way for all of it.

He talked about his finances in a way no one did at the time.  He even challenged his opponents to do the same, correctly sensing a soft spot there.  He defended himself and promoted his ticket.  He spoke about the threat of communism and shared a letter from the wife of a marine serving in Korea.

But the thing most people remember about the speech, the part that transformed it from a political address into a legend, had to do with that little scribbled name “Fala.”  It was a reference to the humorous way Franklin D. Roosevelt had, in 1944, accused the Republicans of attacking his little dog.  It worked well for FDR, so Nixon thought to try it himself:

“One other thing I probably should tell you, because if I don’t they will probably be saying this about me, too.  We did get something, a gift, after the election.

A man down in Texas heard Pat on the radio mention the fact that our two youngsters would like to have a dog, and, believe it or not, the day before we left on this campaign trip we got a message from Union Station in Baltimore, saying they had a package for us.  We went down to get it.  You know what it was?

It was a little cocker spaniel dog, in a crate that he had sent all the way from Texas, black and white, spotted, and our little girl Tricia, the six year old, named it Checkers.

And you know, the kids, like all kids, loved the dog, and I just want to say this, right now, that regardless of what they say about it, we are going to keep it.”

Nixon’s remarks that night have been forever known as “The Checkers Speech.”

It quickly became fashionable in elitist circles to ridicule the speech – and the candidate.  That continued throughout Mr. Nixon’s turbulent career of, as he called them, “peaks and valleys.”  But the fact remains that this was one of the most effective speeches in the history of American politics.

In the immediate aftermath of the speech, the Republican National Committee in Washington, D.C. was inundated with 160,000 telegrams and eventually 250,000 letters.  The sentiment ran 350 to 1 in favor of keeping Richard Nixon on the Republican ticket in 1952.

Nixon survived the crisis – as he would many others.  He lived to see dreams fulfilled and to also experience defeat and deep personal pain.  None of what happened in the years following 1952 – the good, the bad, and the ugly – would have been possible without that speech in September of 1952.  The story of those days is one that should be studied afresh and anew by political operatives and pundits.  The lesson is that you can fight the media frenzy – in fact, it’s the only real option.  To surrender is to turn yourself and your cause into a footnote.

As politicians ponder media and opposition-driven suggestions about dumping a candidate, someone should visit a little pet cemetery in Wantagh, Long Island.  There lies Checkers – more than a dog – in fact, a metaphor for surviving a political storm.