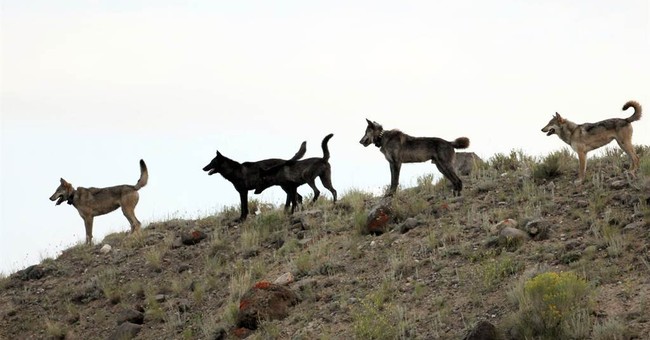 Environmentalists have galvanized behind a movement to resurrect wolf populations in rural America. Public support, particularly from urban regions, appears to favor the idea of returning this iconic symbol of the wilderness to America’s rural landscapes. Unfortunately there is a lack of public awareness to the real life consequences for those living with wolves. The result is a misguided Federal wolf introduction program that disregards protests from states where wolves are forced on communities that don’t want them.

In Catron County, New Mexico, aggressive Mexican gray wolves are terrorizing residents. Here wolves are killing pets in front yards in broad daylight, and forcing parents to stand guard when children play outside. The threat has become so ominous the local school district has decided to place wolf shelters (kid cages) at school bus stops to protect school children from wolves while they wait for the bus or parents. These wolf proof cages, constructed from plywood and wire, are designed to prevent wolves from taking a child. The absurdity of this scenario is mind-numbing. What kind of society accepts the idea of children in cages while wolves are free to roam where they choose?

This situation exemplifies the problem with the Endangered Species Act (ESA). It has drifted far from its original intent and become a useful tool for extreme environmentalists to push their agendas, often placing the interests of wild animals above the interests of real people.

The ESA allowed the U.S. Fish and Wildlife Service to release captive Mexican gray wolves in New Mexico and Arizona in 1998 as a “nonessential experimental population.” The experiment isn’t going so well. 15 years after its inception the wolf population in these states is growing and so are conflicts between wolves, livestock, local residents, and federal government agencies in charge of the program. Now, despite growing resistance from local communities, the U.S. Fish and Wildlife Service has proposed an expansion of the Mexican gray wolf program.

Those forced to live with wolves on a daily basis have found there is little they can do about the harmful consequences imposed on them by their government. They find themselves having to deal with two predators—one from the wild and the other from Washington, D.C.

According to the U.S. Fish and Wildlife Service, willfully harassing, harming, or killing a species listed on the ESA can lead to fines up to $100,000 and one year in jail.

The local sheriff in Truth or Consequences is Joe Baca, a no-nonsense law enforcement officer who doesn’t take kindly to outside influences dictating terms for how public safety matters are dealt with. I recently met with Sheriff Baca to learn the truth about wolf threats to humans and the consequences of government programs that force wolves on civilized areas.

“My number one priority is public safety,” Baca told me, “I don’t work for the Federal government. I work for the residents of this county. The truth is that one of these days we are going to have a wolf incident with a human tragedy. In my opinion our citizens are more important than any endangered species. There is no way I am going to allow any Federal agent to come into my county and arrest someone for protecting their livestock or their family by killing a wolf.”

Local resident Crystal Diamond has experienced several run-ins with wolves, including two close encounters when she was alone with her young children. She expressed her growing frustration with this government induced wolf problem — “As mothers raising our children in wolf country, we have the additional responsibility of protecting our children from a threat that is imposed by our own government and funded by our own tax dollars.”

Many rural communities in New Mexico and Arizona view the Federal government’s artificial wolf introduction program as a predatory action against state’s rights to manage wildlife, and local government authority to protect private property and public safety. When it comes to the ESA, the Federal government has often misused the law to usurp state’s authority and override local concerns by imposing restrictions on land use and wildlife stewardship.

Conflicts over the ESA primarily revolve around competing sets of values. Rarely is the debate over whether a species is threatened with extinction. The truth is that most of the species listed as endangered, including the gray wolf, are not in any danger of extinction. These so-called endangered species are simply not deemed at acceptable levels in a geographic location.

Those who believe ecosystems must to return to an original pre-human settled state, use the ESA to protect species from harm by forcing mankind to modify behaviors. The result is slowed and stalled infrastructure projects, higher costs of goods, restrictions on development, and limitations on private property rights. But the preeminent problem is contrasting values that juxtapose those who believe in mankind’s superiority to animals with those that place animals and humans on a level of equal value, or in some cases, give higher value to an animal, bird or fish.

There are around 1,500 species listed as endangered or threatened by the ESA. Only 27 have been deemed recovered and delisted. While the Mexican gray wolf program may be expanded, its more common cousin, the gray wolf, is now under consideration for delisting, in part because as the numbers grow, so does the difficulty of managing this predator.

Wolves are a unique predator. There were very valid reasons why they were driven from the lower 48 states through government wolf eradication projects in the early 1900‘s. There is no other apex, top-of-the-food-chain predator in North America so destructive to livestock, wildlife, pets, and ultimately economies, as the wolf. After a long absence of wolf populations in the lower 48 states, public opinion of the wolf changed. It has become a non-threatening symbol of environmental idealism. But with the return of the wolf, and their destructive behavior, rural America is quickly learning why wolves were removed from settled areas.

Wolves reintroduction programs began in earnest in the mid-1990‘s when Canadian wolves were planted in Yellowstone Park. Here their killing capability is on full display. As pack hunters, wolves have a huge advantage over their prey. The northern Yellowstone elk herd numbered around 20,000 in 1995 despite predators such grizzly bears and mountain lions. Today the same herd is less than 4,000 — an 80% reduction. Moose populations have also suffered enormous losses to wolves in the Yellowstone area.

States like Montana and Idaho have felt the economic impact of having large numbers of game animals killed by wolves. With fewer hunters and less permits issued, annual funding revenues for state Fish and Game departments have decreased. Less hunters mean less money, and taxes collected, in small communities that depend on this industry.

The problem with wolves is that there is no such thing as just a few wolves. Wolves breed at extraordinarily high rates and as their numbers grow, their territory naturally expands. One year three females in the Yellowstone Druid pack had a total litter of 21 pups – 20 of them survived. It doesn’t take long for the population to explode, and that is precisely what has happened. There are now hundreds of wolves roaming Montana, Idaho, and Wyoming.

The ESA brought wolves into Yellowstone, but didn’t consider the economic impact on neighboring states. Nor did it take into account the jeopardy to small business owners in the livestock industry who have been forced into the unfortunate reality of feeding wolves with their livestock.

Wolves are killing machines with a naturally ingrained instinct to chase. At times this inclination can lead to sport killing. Sheep are often the victims of these rampages and offer a convenient training opportunity for young wolves to learn the art of the kill. This past summer Montana rancher Bill Hoppe had 18 sheep killed by a collared wolf from Yellowstone Park — none of the dead sheep were eaten. The Siddoway Sheep Company in Eastern Idaho had 176 sheep killed in a wolf induced stampede. Only two sheep were partially eaten. Over the course of two month’s the Siddoways lost 250 sheep, several dogs, and a horse to wolf attacks.

Serious problems with wolves are not limited to their capacity to kill. They are known carriers of disease that can cause severe problems and even death in both animals and humans. In Alaska 300 people have contracted the deadly hydatid disease from encountering wolf scat and tracking it into homes. This disease has been identified in over 60% of wolves in Montana and Idaho. Wolves spread anthrax, brucellosis and other diseases throughout wildlife and livestock populations, causing infertility, miscarriage and death.

Some large predators, such as wolves, are simply incompatible with civilization. The grizzly bear is a case in point. California, where I currently live, has a grizzly bear on the state seal and flag. At one time as many as 10,000 grizzlies roamed the state. But grizzly bears have not been in California since 1922. There’s just no way to mix such an aggressive predator with populated areas. Wolves are an even more difficult predator to manage.

Gray wolf populations now far exceed the recovery goals established by the U.S. Fish and Wildlife Service. With the gray wolf now under consideration for removal from the endangered list, wolf management would return to where it belongs — in the hands of states instead of the Federal government. Management of wildlife, including endangered species, should be the responsibility of states rather than bureaucrats in far-off places like Washington, D.C.

Since artificial wolf introduction programs began, wolf proponents have used every possible means at their disposal to keep wolves from being delisted from the endangered list. It took an act of Congress in 2011 to delist wolves in Montana and Idaho. Legislation was attached to a must-pass budget bill, resulting in legislation being used for the first time to remove ESA protection of a species.

The pro-wolf lobby is powerful and well-funded. Extreme environmentalists such as Defenders of Wildlife, Wild Earth Guardians, Sierra Club, and the Center for Biological Diversity are aggressively lobbying to keep wolves on the endangered list. Unfortunately, rural communities most impacted by wolves, don’t have such well-funded organizations fighting on their behalf.

The truth is wolves are not compatible with people living in populated areas including most of the settled territory of the lower 48 states. Wolves need to be managed in a way that does not subject children to cages at school bus stops, drive small business owners in the livestock industry to ruin, burden taxpayers with expensive wolf management programs and lost tax revenues, and force local communities to suffer consequences of Federal government actions.

Allowing the Endangered Species Act to place the interests of animals, birds, fish and plants above the interests of mankind is a recipe for disaster. We have a clear choice; either we control predators in the wild, and in government — or they will control us.