The Left Is on a Mission to Annihilate Conservatism

David Limbaugh
|
Posted: Aug 09, 2019 12:01 AM
Share   Tweet
The opinions expressed by columnists are their own and do not necessarily represent the views of Townhall.com. 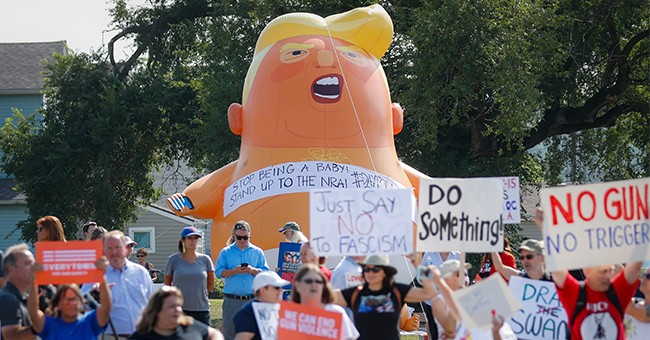 While President Donald Trump is an ideal scapegoat for leftist hatred and demagoguery, the left's ultimate goal is to permanently reduce conservatism and the Republican Party to minority status by indelibly associating them with racism.

Democratic Texas Rep. Joaquin Castro, chairman of the presidential campaign for his twin brother, Julian, published the names of San Antonian contributors to Trump's reelection campaign, publicly denouncing them for "fueling a campaign of hate that labels Hispanic immigrants as 'invaders.'"

Castro's message is clear: Anyone who donates to Trump's campaign is a racist. As there is little difference between supporting Trump and donating to his campaign, Castro is saying that all Trump supporters are racists. Worse, Castro, and others, are trying to tie the mass shooting in El Paso to Trump and his supporters. There is nothing subtle about this. Their aim is to shame people into leaving the GOP.

One of the doxed donors, William Greehey, who incidentally contributed to Castro's 2011 and 2013 campaigns, was appalled at this slander and identified it for precisely what it is. "It is just amazing to me that he would do that," said Greehey. "Then he's calling me a racist because I'm supporting Trump. I mean, this is just ridiculous. There's a lot of things you don't like about the president and his tweeting, but here Castro is doing the same thing with his tweeting."

Wayne Harwell, another Castro donor caught in his doxing web, said: "If someone dislikes you enough to try to affect your business or personal life, I will not support him anymore. Maybe Castro's supporters should look over their shoulder. Frankly, I think the nasty rhetoric coming from the Democratic national candidates is worse than anything Trump has said." Bingo.

Even when called out, Castro didn't back down, other than to disingenuously claim he didn't create the list but only shared it. Seriously, Joaquin? He said it wasn't his intent to target the people he doxed -- an outright lie on its face -- but would like for them to "think twice about supporting a guy who is fueling hate in this country."

Sorry, Mr. Castro, and all progressives who keep spreading this lie, but Trump is not trying to build a wall because he doesn't like Hispanics, and every time you mouth this toxic mantra, you show you are willing to cast all border hawks as racists. More to the point, Castro, you are the one fueling hate in this country, and people are wising up to your scheme.

Though Booker called on Trump to denounce white supremacy after the shooting, when Trump did just that, Booker would not accept it. Moreover, Booker's campaign team called for cancellation of all Trump rallies because they are a "breeding ground for racism and bigotry." Never mind the abominable infringement on people's constitutional right to association that this unserious dabbler in presidential politics is advocating. Consider the malice in his charge that patriotic Americans gathered together to support President Trump are breeding racism and bigotry. No matter how twisted Booker's thinking is, he knows better.

If this weren't proof enough of progressive malevolence, we have the reliably bizarre Joe Biden, who expressly claims that Trump is intentionally stirring up white supremacy. "It's both clear in language and in code this president has fanned the fumes of white supremacy," said Biden. "(Trump's) vacant-eyed mouthing of the words written for him, condemning white supremacists this week, I don't believe fooled anyone at home or abroad. ... Energetic embrace of this president by the darkest hearts and most hate-filled minds in this country say it all."

It's obvious that Biden has lost all semblance of shame. The last person in America who talks in code is President Trump. He is direct, and his message is not about racism or white supremacy but about equal and robust opportunity for all.

Obviously, leftists haven't just gone off the rails with their insane policy ideas (and by "insane," I mean "crazy"). They are now demonizing half of Americans -- the half that don't embrace their insanity -- as enablers of a president who enables white supremacy -- though he denounces it. It's gotten to the point that these intolerant, mean-spirited extremists are trying to harm people simply for having a different political opinion, as shown by their boycotting fitness centers Equinox and SoulCycle because the owner of their parent company hosted a Trump fundraiser.

Leftists are doing incalculable damage to the fabric of society and race relations, but I can't help but believe that if they keep this up -- and they most certainly will -- they will pay a heavy political price in 2020.