GOP Should Worry Less About Trump and More About Itself 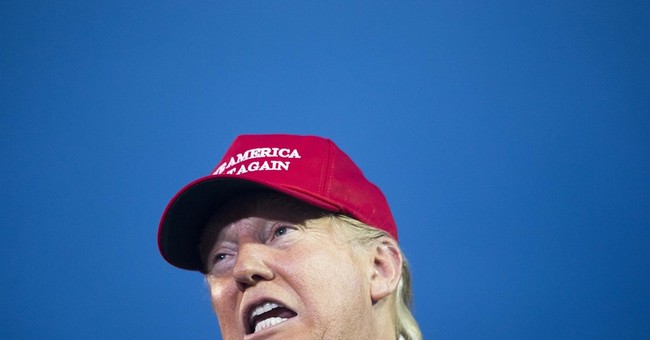 Commentators and political consultants are working overtime to divine why Donald Trump's candidacy is explosively successful despite his breaking all the established rules. They're outthinking themselves.

They say he is a flash in the pan, the darling of disaffected independents, the tea party's dream, a Clinton plant or the right wing's narcissistic alternative to Barack Obama.

Folks, it's not that difficult. For many Americans -- who knows what percentage? -- the Republican Party is not an antidote to President Obama's seven-year wrecking ball.

They look at the GOP and occasionally see strong rhetoric but mostly observe a lack of inspiration, energy and any sense of urgency about the current state of affairs. They recall that when Republicans didn't have control of Congress, they asked for patience until they recaptured the House. In the meantime, we were not supposed to rock the boat and jeopardize the upcoming elections.

Since winning back Congress, they've offered a similarly tired excuse: We don't have control of the presidency. Just wait until 2016, and we'll really turn things around. But for now, let's be calm.

Calm? What is there to be calm about?

Those living outside the Beltway wonder why there isn't universal horror over the $18 trillion debt and $100 trillion of unfunded liabilities threatening our kids' future, the gutting of our military, the government's destruction of the world's best health care system, the assault on American businesses and the energy industry, Obama's runaway Environmental Protection Agency, his managed invasion of our borders, his war on Christians' religious liberty, his mistreatment of Israel, the Iran deal, and the government's funding a notorious abortion factory.

It's true; Republicans don't have control of the executive branch. But that doesn't mean they have no power. They have the power of the purse. They didn't have to forfeit their constitutional power on the nuclear arms deal with Iran.

Obama hasn't had the power to do many of the things he's done, either -- from granting selective exemptions on Obamacare to granting amnesty to "Dreamers" -- but nothing has stopped him.

Likewise, the same-sex marriage lobby didn't have anywhere close to a majority when it started bullying its way toward societal and legal legitimacy, but it proceeded fearlessly. And it got results.

Even if you believe that Republicans have no power, is that any excuse for their always having their tail between their legs? Some see little evidence that the Republican Party believes in its own ideas anymore.

But that's not the case with Donald Trump. Even if he isn't a Reagan conservative, at least he's got the courage to take on the status quo -- the outrages of the Obama administration, the complacency of establishment Republicans and the tyranny of political correctness.

Trump is standing up, shaking his fist at the Beltway elite and saying he is tired of the intentionally managed decline of America and the impotence and apparent indifference of Republicans. In contrast with much of the GOP ruling class, he is high-energy, is in your face, has no tolerance for excuses and is vigorously proud of America. He refuses to take no for an answer, unlike most Republicans, with a few notable exceptions, who seem to lust after any excuse for inaction and avoid confrontation at all costs. Trump may get more slack because he's an outsider, but it's time that our risk-averse people took some chances themselves.

Trump is filling a void, which he couldn't do if one didn't exist. Like him or not, he is shaking things up, sounding an alarm and showing other candidates what appeals to voters.

Some look at establishment Republicans and see those comfortable with Obamacare lite. They pretend to favor full repeal but in the end will only tweak it. They say they're fierce free-marketers, but they'll barely reform the tax code. They acknowledge that entitlements are bankrupting us, but they don't have the guts to make the case for restructuring them. They promise to cut government spending, but they think that means shaving pennies off the rate of increase. They say they'll protect the borders, but they spend half their time trying to prove they're not xenophobes.

When Ronald Reagan was vying for the Republican nomination, he didn't muzzle himself for fear of scaring off moderates. He said what he believed. Leadership is presenting ideas you believe in and selling them even to a minority. It is not keeping your powder dry until the next election. Do you ever see the wildly successful left doing that?

Trump is showing leadership, whether or not you like him or believe in his authenticity or his ideas. Before you complain too much about him, you should ask yourself what his success says about the establishment's prescription of sitting on our hands and biding our time.

Trump is hardly my first choice, but he is doing a lot of good right now, including showing the value of confidently presenting your ideas and how "making America great again" is a message that still strongly resonates with voters.

Let's quit spending so much time worrying about Trump and focus on regaining confidence in our own ideas and presenting them to the American people.