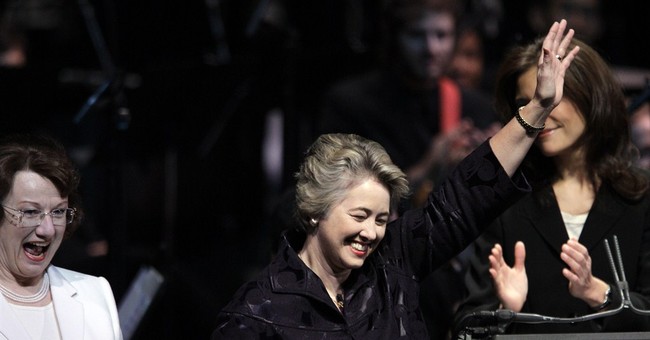 Note to Readers: The following column, which was based on the reporting of various other media outlets, mistakenly reported that Houston's equal rights ordinance allows men and women to use each other's public restrooms. In fact, that clause was removed from the ordinance before it was approved. We are sorry for the error.

There are at least three outrageous things about the Houston city government's recent actions pushing an ordinance to allow men and women to use each other's public restrooms.

The first is the substance of the ordinance itself, which allows men and women, irrespective of their biology, to use bathrooms designated for the opposite sex. The major driver of this law was Houston's lesbian mayor, Annise Parker.

Have we just become completely insane in this country? Is nothing sacred anymore? Is there no limit on the demands of radical leftists to force the rest of us to normalize their bizarre behavior?

These people obviously want to dilute natural distinctions between genders and force us to accept their warped view that one's gender is merely a matter of one's mindset. They are even casting it as a law to prevent discrimination against gender-confused people -- as if they are yet another protected class. In more stable times, this would be so self-evidently absurd that I'd hardly need to write a column on it.

Think of it as sort of a reverse slippery slope ploy. The proponents of the ordinance doubtlessly figure that if they can force their fellow citizens to live with the notion that biology is wholly irrelevant to gender, then they will have taken one more giant step toward achieving society's approval of same-sex marriage.

It doesn't seem to bother supporters of the ordinance one whit that it allows sexual predators to pretend they are of the opposite sex in order to sneak a peak (or worse) in the bathrooms of the other gender.

Putting this in perspective, some critics have called the ordinance the "Sexual Predator Protection Act." Indeed, what about the rights of people who want to be protected from predators? What about the interest of citizens who want to protect their families -- their children -- from being exposed to the dangers of sexual predators? What about their views and their values? Are they entitled to any protection, or is it only those who subscribe to extreme leftist positions who are entitled to the law's protections?

Nothing can be permitted to interfere with the left's fast march to coerce society into accepting its preferences into law. If a few women or men are assaulted in the process or if their privacy is violated, that's a small price to pay on this historic path to dilute our natural gender identities -- a path that will further endanger the nuclear family, which is a bedrock institution that lends moral stability to society.

The second outrage is that the city has greatly overreached in subpoenaing the pastors of the city for copies of their sermons and their communications to their congregations to determine whether they have violated this Godforsaken ordinance. Lest you think this was a mistake, the mayor tweeted, "If the 5 pastors used pulpits for politics, their sermons are fair game."

There is no constitutional prohibition against pastors discussing politics. This issue only comes up in connection with tax laws and regulations, but even those don't preclude pastors from discussing policy issues. The only arguable limitation concerns overt endorsements of candidates.

The Alliance Defending Freedom, which is representing the pastors, said the city's effort to compel disclosure of the requested information is completely improper. Not only are the pastors not a party to the lawsuit, which was brought by voters to challenge the validity of the city's adoption of the "equal rights ordinance," but the materials they are seeking aren't reasonably calculated to lead to the discovery of admissible evidence, and their motion is overly broad.

The third outrage is the city's lawless disqualification and rejection of valid petitions filed by voters to challenge the law. Voters submitted more than three times the legally required number of petition signatures to require city action (17,269 were required, and the voters submitted a whopping 55,000), and the city secretary initially certified them as sufficient in number. But the mayor and city attorney outright rejected the petition anyway, on the specious grounds that the petition signatures weren't valid.

Increasingly, we see leftists in this country openly defying the law if it does not serve their ends and trampling the Constitution and rights of those who don't march in lock step with their demands. Leftists talk a good game about honoring the will of the people but habitually ignore and suppress that will when it doesn't conform to their own, from activist liberal judges who continually defy the express will of the voters in rejecting same-sex marriage to this bona fide, good-faith challenge to Houston's overreaching ordinance process.

The extreme left, whose natural political habitat is the Democratic Party, is growing ever more intolerant, excessive, coercive, intimidating, lawless and frightening. People of ordinary sensibilities and traditional values and others are awakening to the fascism of extreme leftists in this country, which is one of the many reasons we're going to see a tsunami of voters voicing their outrage against such un-American behavior in November.