Fact-Challenged and Extreme? Do You Really Want to Go There, Mr. President? 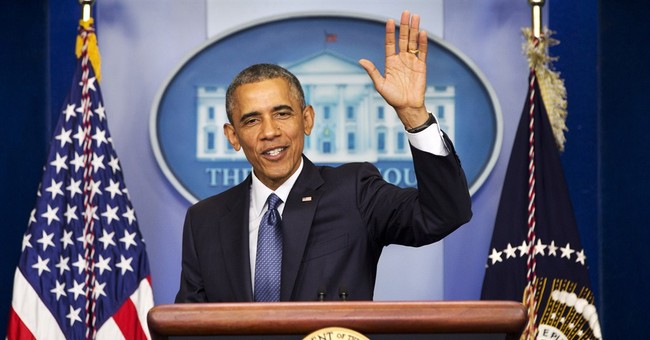 President Obama claims that the extremism and reality-challenged nature of his political opponents explain his limitless policy failures, which, of course, he also refuses to acknowledge. This is truly rich but nothing new.

Obama told New York Times columnist Thomas Friedman, "What you've seen with our politics ... is increasingly politicians are rewarded for taking the most extreme, maximalist positions." He continued: "Sooner or later, that catches up with you. You end up not being able to move forward on things we need to move forward on. ... We need to rebuild our infrastructure. You go to the Singapore airport and then you come back to one of our airports and you say, 'Huh?' We're not acting like a superpower."

Obama said we need "to revamp our education system." "All these things are doable. Our fiscal position, actually, now is such -- you know, the deficit's been cut by more than half -- where we're in a position to make some smart investments that have huge payoffs, that historically have not been controversial, historically have garnered bipartisan support. But because of this maximalist ideological position, we've been blocked. ... That ideological extremism and maximalist position is much more prominent right now in the Republican Party than the Democrats."

How did he describe the Republican maximalist extremism? He noted that while "the Democratic consensus" is "pretty common-sense, mainstream" and generally "fact-based and reason-based," the Republican position is "a lot of wacky ideological nonsense. He said: "We're not denying science. We're not denying climate change. We're not pretending that somehow, having a whole bunch of uninsured people is the American way."

Can you say "delusional"? Republicans are extreme? Not fact- or reason-based?

Obama simply will not accept responsibility for his own actions or the failure of his own policies. His latest jaw dropper is his denial that he had anything to do with completely withdrawing our troops from Iraq, though he campaigned on a promise to do so and refused to become engaged enough in the Iraq problem in 2011 to even try to achieve a status of forces agreement. As if auditioning for the "Saturday Night Live" character who would play him, he said, "What I just find interesting is the degree to which this issue keeps on coming up, as if this was my decision." Wow.

In Obama's defense, he has no choice but to blame others for his failures, because he is serving a lifetime sentence in the prison of his narcissistic psyche.

--Your refusal to recognize the global threat of Islamic terrorism, believing the only culprit is al-Qaida? Or your fantasy that terrorists are born as a result of the failure of governments to give them a seat at the table of power, as opposed to their ideological fervor, and that they can be won over with a little tolerance?

--Acting as though we don't have a crisis on our southern border?

--Dismissing the Internal Revenue Service's targeting of conservative groups and the convenient, mysterious destruction of agency hard drives as a phony scandal?

--Claiming Obamacare is improving our health care system, improving the quality of care, increasing choice and reducing costs to individuals and the government?

--Contending that you've cut the deficit in half when you are basing that calculation on an artificially high base line based on your predecessor's last year in office, which included extraordinary items from the 2008 financial meltdown?

--Alleging that a deficit that has finally been reduced -- against your wishes, by the way -- to a figure twice as high as President George W. Bush's average deficit constitutes fiscal progress when we have $17 trillion of debt and $100 trillion of unfunded liabilities? Do you actually expect us to believe that just because our deficits are lower than during Bush's last fiscal year and your first term, which featured record-setting spending, we are now swimming in money and have surplus resources to spend on infrastructure and education? That's like a bankrupt individual's saying he intends to build a mansion because he only increased his bankrupt-level indebtedness half as much this past year as he increased it the year before. Do you really not yet understand the difference between deficit and debt?

--Claiming that your nearly trillion-dollar stimulus package, your war on business and oil, your avalanche of new smothering regulations, and your onerous tax policies have resulted in an economic boom throughout your term?

--Pretending that one incidental quarter of growth -- which fails to factor in that we have the lowest labor participation rate since 1978, anemic household income and record levels of people on government assistance -- sustains your claim that we're witnessing an economic boom?

--Your belief that if we just throw more federal money at education, we'll start seeing some results?

If the polls are any indication, people may finally be realizing that it is not Republicans but Obama's extremism, his unswerving ideology and his refusal to accept facts and draw reasonable conclusions from them that are perpetuating America's rapid decline.

November should tell the tale.