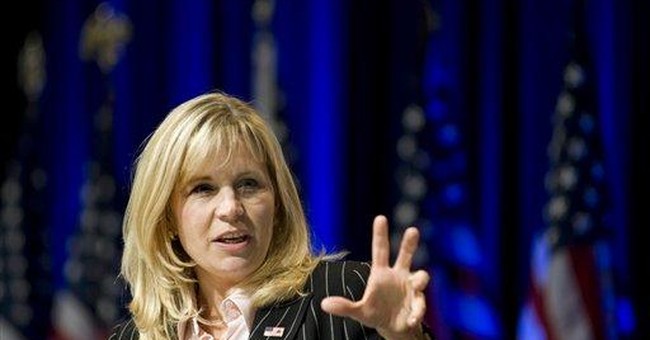 The left habitually distorts and exaggerates to demonize and discredit its opponents but squeals like a stuck pig when conservatives use colorful language to call the left out. Unfortunately, some on the right encourage the left's squealing.

As for the liberals, it's hard to take them seriously when they register their indignation at, say, Sarah Palin for her "death panels" comment, other conservatives for describing Obama as a socialist or liberals as "liberals," or, most recently, Liz Cheney for calling seven Justice Department appointees the "al-Qaida Seven."

Liberals are the ones who knowingly lied in saying that "Bush lied; people died," that supply-side tax cuts are "just for the rich" and that Bush left people on the rooftops in New Orleans after Katrina because they were black. These weren't just harmless rhetorical barbs; they had and continue to have serious, substantively damaging consequences.

Nor are the above descriptions by Palin, Cheney and other conservatives a matter of tit for tat or a case of the left's wrong mitigating the right's. The conservatives' statements above are different because they have a strong ring of truth, and they are not just gratuitous; they serve the purpose of calling attention to what is truly going on.

I'm not advocating that we be uncivil or mean-spirited, but that we have the guts to tell the truth, using difficult-to-hear language when necessary. I dare say our failure to speak frankly and boldly has a lot to do with the horrible predicament we're in in this country. Speaking a little more truth to political correctness would be helpful. But the left's tactic of whining and crying foul at anything it chooses to be offended by, echoed by genteel enablers on the right, intimidates many from expressing truth for fear of public condemnation.

Many believe, after reading versions of Democratic health care plans, that powerful bureaucracies would be created that would have authority over the types of treatment health care providers would give, especially end-of-life decisions. Those bills also would grant wide rule-making authority to those and other bureaucracies, which, if this nation's past and current practice of administrative law is any indication, would be given wide berth and have little accountability to Congress, much less the people. Add to that the mindset of those Obama has surrounded himself with and who have had or will have their fingerprints on the drafting of these health care bills or on the regulations to be promulgated under Obamacare, such as Tom Daschle and Ezekiel Emanuel. They are known for ghoulish advocacy of government-administered rationing of care, especially to the elderly, driven by their creepy values regarding human life. Tell me, then, how it's unfair or inaccurate for Sarah Palin to have called attention to that with "death panels"?

The same is true for graphic photos of abortions, decried as grotesque by the left. They're grotesque, all right, because what they depict is abominably grotesque. We have not only the right to force ourselves to face this grim, unconscionable reality by viewing grotesque pictures, if necessary, but also the duty. By shielding ourselves from these pictures showing what actually goes on in abortions, we make it easier on ourselves to do the wrong thing.

The same holds true for describing Obama as a socialist. What's wrong with telling the truth, especially when candy-coating it enables Obama to operate under the radar? Are those on the right who condemned their fellow conservatives for calling attention to his radicalism early on, when it might have mattered, ever willing to hold themselves accountable for their error?

So when Liz Cheney dubs new additions to the Obama-Holder Justice Department the "al-Qaida Seven," I'm just not too exercised. As a lawyer who believes strongly in the adversarial system, I will defend the right of lawyers to represent whomever they want in our system.

But this isn't about the right of lawyers to defend unsympathetic clients. It's about placing lawyers in our Justice Department who might well be sympathetic to or soft on the enemy. And that's anything but far-fetched, given what we now know about Obama, his attitude about America's past and its alleged culpability in causing terrorism, the America-hating radicals he has appointed, and Eric Holder himself. Scrutiny is warranted.

Kudos to courageous conservatives for calling attention to unpleasant realities.