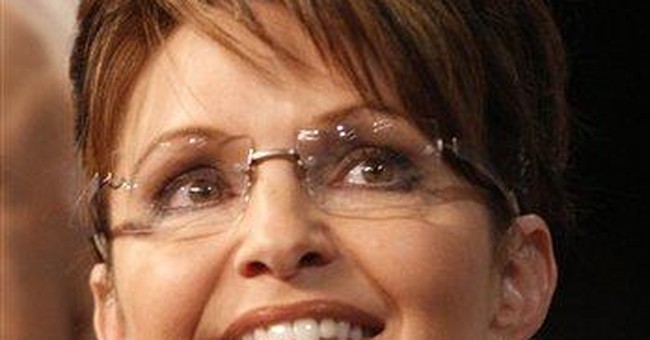 It seems the mainstream media's favorite pastime is to ridicule Sarah Palin. Of all the screeds I've read, I don't think any are snarkier than The Washington Post's Sally Quinn's "On Faith" blog post "Sarah Palin's 'rogue' Christianity."

Do we need further proof of the secular orientation of our dominant media culture than the fact that Quinn, an avowed atheist, pens the Post's "On Faith" blog? That would be like featuring a column by Fidel Castro on free enterprise and individual liberties.

On her mini-bio, Quinn writes: "I announced to my parents when I was 13 that I was an atheist. And I was a committed atheist all of my life. My view was that more evil had been done in the name of religion than anything else in the world. I saw no redeeming value in it at all. Then I met Jon Meacham and we began talking. No, Jon didn't convert me, but he did convince me that religion was not a subject to be dismissed or disdained."

If that's true, why did Quinn devote her entire blog post to dismissing and disdaining Sarah Palin's profession of faith in her book, "Going Rogue"? I must admit, though, it's difficult to tell whether Quinn is motivated more by her disdain for Sarah Palin, whom she has a history of berating, or mainstream Christianity.

Quinn says: "Sarah Palin writes that one summer at Bible Camp she 'put my life in my creator's hands and trust Him as I sought my life's path.' For Palin, this grand divine plan was 'a natural progression.' She writes. And later, 'I don't believe in coincidences.'"

Quinn -- convinced she has exposed Palin as confused, conflicted and acutely hypocritical -- volleys a series of rhetorical questions designed to reveal Palin's apparent inconsistency in believing that God is in complete control ("I don't believe in coincidences") and yet he allows or causes terrible things to happen to people.

Perhaps Quinn wouldn't be so smug if she were to do the slightest bit of thinking or reading about the concepts of God's sovereignty and free will -- ideas that have challenged the finest minds for 2,000 years and contributed to denominational differences within evangelical Christianity. Has Quinn studied Calvin, Wesley, Luther or any other past or present theologian on these issues?

Nor is Palin's statement on coincidences unique. Indeed, as a matter of coincidence, er, I mean God's sovereignty, my own learned pastor, Ron Watts, made that very same statement ("I don't believe in coincidences") a few weeks ago in his sermon. He went on to add that he doesn't believe God's sovereignty is inconsistent with the doctrine of free will. I realize that "five-point" Calvinists may disagree, but that's beyond the scope of this column.

Quinn also implies that Palin is on the fringe of Christian thought by confessing her trust in Jesus Christ. But the reality is that Palin's faith profession is consistent with mainstream Christian thought. To place one's trust in Jesus Christ is of fundamental importance to Christians and, most believe, essential to salvation. Secularists often demean the concept as a sign of weakness ("using Christ as a crutch"), but Christians plead guilty to the indictment and respond that the Bible commands us to acknowledge our weakness and surrender ourselves to Christ. By ridiculing Palin on this point, Quinn mocks the Bible and all of mainstream Christianity and reveals her profound ignorance of basic Christian doctrine.

Quinn's derision would be easier to tolerate if she hadn't also written in her mini-bio: "I don't have any idea who or what God is. But the closest explanation I've heard ... is ... 'When two people relate to each other authentically and humanly, God is the electricity that surges between them.'"

And Quinn has the audacity to condescend to Sarah Palin on matters of theology?

Quinn is exercised at Palin for supposedly settling scores in her book and allegedly failing to exhibit the Christian qualities of "love, generosity, mercy and forgiveness." But it's my informed guess that Quinn's contempt for Palin has nothing to do with these false charges or Palin's alleged hypocrisy or even her theology but is rooted in Palin's conservative ideology.

I'll just say this. Apart from the far left, those who have followed Sarah Palin will discern that Quinn's assessment is completely opposite of what they observe. You can't watch Sarah Palin in action or in interviews without recognizing her genuineness, her graciousness, her kindness and her authentic Christian spirit.