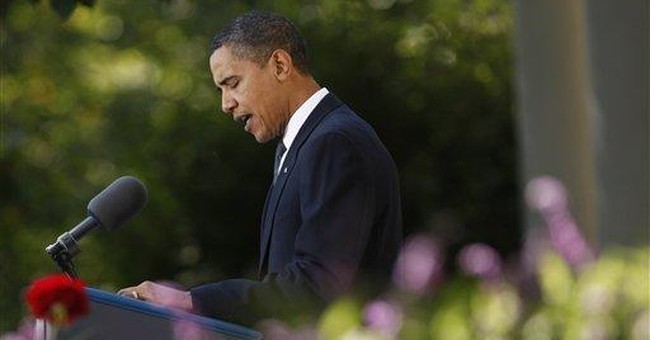 Is there no problem Obama and his mesmerized Democrats think cannot be solved with money -- other people's money? Just when you think you've heard it all, more news stories about this bunch surface to shock you.

The Sunday Times reports that the administration is considering a novel approach to the war in Afghanistan: outbidding the Taliban to persuade Afghan villagers to lay down arms.

So much for a "war of necessity," which was just an opportunistic sound bite for Obama to demonize Bush while cynically pretending to be hawkish enough in the war on terror to appeal to Middle America. No, for Obama, Afghanistan must just be another "street" to organize, another constituency to schmooze in his permanent -- now global -- campaign.

Even when the Bush administration employed strategies to win over Sunnis, it was coupled with a redoubling of our military effort and a marked alteration in our strategy to "hold" territory once we had taken it. This idea that you can reduce this war to an auction, divorced from the required steps needed to strengthen the security there, is insane.

That's not merely my independent assessment. One general close to Gen. Stanley McChrystal told the Times he was taken aback by the administration's attitude. "It surprised a lot of us -- we thought the policy decision was made to come down on the counter-insurgency course of action." The general said the notion that "we can just cut deals with the Taliban without having to do anything" is a "crazy" idea.

Why won't money alone do it? Because "at the moment you can't recruit from Pashtun communities or their families will be killed, so we need to first improve security."

Apparently, this concept doesn't register with Obama, who has obviously been mentored from an early age to believe that all the world's problems can be mitigated, if not reduced, by "economic justice" -- the naked redistribution of U.S. bucks. He surely missed those lessons instilling such truisms as "give a man a fish and you feed him for a day; teach a man to fish and you feed him for a lifetime."

Then again, Obama's Marxist mentors -- Franklin Marshall Davis, Saul Alinsky and Bill Ayers -- also understood that you don't build an army of street organizers or a recurring voting constituency by teaching people of the streets to fish. When you "share the wealth around," you make the distributees dependent on your next handout -- beholden to your largesse with other people's money and personally worse off in every respect.

There could be no better illustration of this reality than WJR radio host Ken Rogulski's interviews of potential recipients of "stimulus money" handouts at the Cobo Center, in Detroit. One woman described it as "Obama money" that came from "his stash." "That's why we voted for him. Obama! Obama!" That's why you'll surely vote for him again. So much for America as the land of opportunity and entrepreneurship.

Speaking of "stimulus money" -- and still staying on message here -- did you read about Attorney General Eric Holder's grand announcement that more than $37 million in Recovery Act and fiscal year 2009 grants have been awarded to support organizations in developing, implementing and expanding youth-mentoring activities? More than $12 million of these grants is being distributed under the "Recovery Act" to "local mentoring programs to reduce juvenile delinquency, violence, gang participation, school failure and dropout rates."

I realize that as a mere taxpaying citizen, I have no standing in the eyes of this administration to question the propriety of so-called "stimulus monies" being used for such purposes. But it's been clear from the beginning that "stimulus" was just a convenient cover for the type of wholesale wealth redistribution Obama always meant to effectuate. But I digress.

AG Holder says: "These funds allow us to invest further in the future of today's youth by providing mentoring opportunities to help children reach their full potential. These grants will help steer young people away from criminal activities by providing them with healthy life alternatives, positive role models, and direct contact with caring adults." (Given the Obama administration's czar roster, one wonders what type of role models it considers to be "positive" and what life alternatives it deems "healthy.")

Here again, we throw more government money at problems and further empower the government to assume the substitutionary role of the nuclear family to impart values better imparted by the nuclear family. Of course, we wouldn't even be having this discussion if other ostensibly well-meaning government programs hadn't intervened over the past half-century to disintegrate the family unit.

If this government wealth-confiscation trend continues unabated, the mercenary, larcenous socialists of the Obama regime will break the backs of the perpetually demonized wealth-producing Americans, a result so inevitable that we must assume that is what they intend.