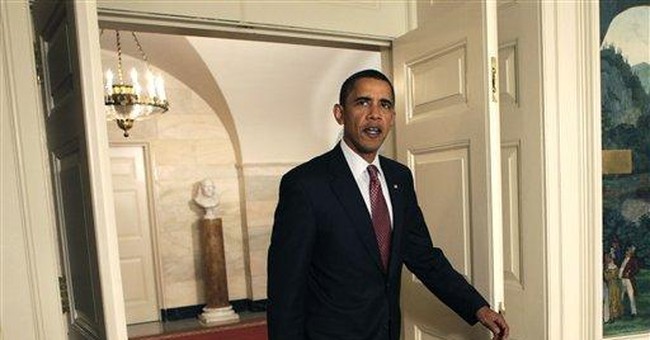 The signature of Obama's (uppercase "D") Democrats is their systematic betrayal of (small "d") democratic principles. Just look at today's news for a flavor of their pattern of flagrantly ignoring the popular will to cram down our throats policies we clearly reject.

As much as Obama pretends to be a man of the people, he is a man for himself -- a man who will get his way, the will of the people be damned. The same is true of many of his congressional lieutenants, including Sen. Chuck Schumer of New York, who recently said that Congress will pass Obamacare despite the public's objections, because it is so important. Important to whom? To Democrats -- that's who.

Obama's Democrats add insult to injury in their steamrolling style of governance by using appealing language to mask their true intentions and pretending to govern in a manner that's precisely the opposite of their actual practice. They use free market language to sell their socialistic schemes and promise transparency while concealing their legislative misdeeds.

--Sen. Jim Bunning's proposal to require the Senate Finance Committee to post the final language of the nearly trillion-dollar health care bill, along with the Congressional Budget Office analysis of the bill, on the committee's Web site for at least 72 hours prior to a vote on the bill was voted down 12-11, with only one Democrat voting for it. Now, why would that bill be objectionable to Democrats when their president promised long ago to follow just such a policy? Simple: The less advance notice we have the less chance we have to block their scheme.

--Human Events reports that Democratic senators are so determined to pass Obamacare over the public's dissent that they're considering utilizing a rare parliamentary trick to bypass conventional Senate rules. The sham involves first merging an unwritten health care bill with an already passed measure from another committee -- the Health, Education, Labor and Pensions Committee -- and then attaching that bastardized piece of legislation to an unrelated House bill -- a bill to tax bonuses on certain TARP recipients.

--Remember all the controversy over conservatives who characterized the end-of-life "counseling" in the House Obamacare boondoggle as the creation of "death panels"? Without rehashing that debate, were you aware that Obama's Democrats had already slipped the death panel concept in their "stimulus" legislation? The American Thinker reported that H.R. 1 -- aka the American Recovery and Reinvestment Act, aka the porkulus bill -- allocates $1.1 billion to fund the Federal Coordinating Council for Comparative Effectiveness Research. That council -- the brainchild of former Sen. Tom Daschle, who surely idolizes Jack Kevorkian -- would be the bureaucratic agency empowered to make decisions on health care rationing. These paragons of compassion just can't quite be open about their sinister schemes. If you think it's over-the-top to call it sinister, then we don't share the same value system.

--Were you aware that the Democratic-controlled Senate Finance Committee just defeated Republican efforts to tighten abortion restrictions in Obamacare to make sure no federal funding will subsidize abortion under any new law? The committee's chairman, Max Baucus, brazenly opposed the move, which failed on a party-line vote, with the specious argument that "this is a health care bill. This is not an abortion bill." If Democrats agree that abortion won't be subsidized under any law, why won't they accede to this restriction? Hasn't President Obama been adamant that his "plan" would not subsidize abortion? Who's telling the truth now?

--Equally contentious has been the debate over whether Obamacare would cover illegal immigrants -- so contentious, in fact, that Obama has called his critics liars for suggesting he's angling for coverage and Rep. Joe Wilson has called Obama a liar for denying it.

Well, we suspect that Obama plans on amnesty for illegals, which would make the coverage question moot. But beyond those justifiable suspicions, Senate Finance Committee Democrats have specifically rejected a Republican proposal requiring immigrants signing up for health insurance or tax credits under Obamacare to prove their identities with photo identification. Can you think of a legitimate reason for Democrats to bar such a responsible measure? Who's telling the truth now?

Obama will also continue to dissemble concerning his intention to establish a single-payer system, though he's on record as having committed to it and continues to press for the "public option," deceptively peddling it as a competition enhancer.

The hard truth, folks, more plainly apparent with each passing day, is that today's "mainstream" Democrats have been exposed as radical leftists, whose agenda is overwhelmingly rejected by a vast majority of Americans. The only way they'll succeed in enacting various components of their socialistic designs -- notwithstanding their strong numerical congressional majorities -- is through trickery, legerdemain, chicanery and deceit.

Unhappily for them, the long-snoring public has finally awoken.