No Compromise, No Retreat, No Surrender 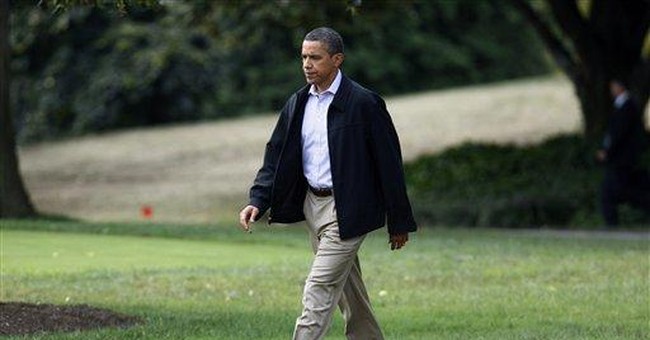 Trending
The key to stopping Obama's far-left agenda is to understand where his heart is. If politicians let their guard down and compromise, the Obama steamroller will regain its momentum and forge ahead to gobble up our individual liberties.

Obama's heart is and always has been on the farthest reaches of the left wing of politics. His driving ambition is to force fundamental change on America. That should go without saying, but it must be repeated -- and repeated -- lest people's forgiving spirits and short memories generate just enough complacency to allow Obama to get back on track.

It is remarkable that Obama has lost public favor so quickly. But the other side of that coin is that he is receiving a wake-up call early enough in his first term to allow him to recover well in time for the crucial 2010 elections.

Some erroneously believe that Obama will continue to bash his stubborn leftist head into the wall against the wishes of the public. I don't believe the modern myth that Obama is an erudite political philosopher, but I do think he's savvy enough to understand that he must significantly repackage his message in order to win back popular support for his policy goals.

The major obstacle to selling Obamacare has been the public's realization that the "public option" is a euphemism for socialized medicine. So it's time for Obama to take his Machiavellian talents to the next level.

His likely recipe will be 1 part Alinsky, 1 part linguist George Lakoff, who urges Democrats to flavor their statist medicines with bucketsful of sugar to dupe the voters, and 1 part Clintonian triangulation.

But it won't just involve a single deceptive euphemism, such as "public option." It will be presented in broader thematic terms -- as in, he is trying to expand competition and patient choice. He has experience in such chicanery. For example, he used his chairmanship of the Chicago Annenberg Challenge to divert $100 million to left-wing activists for their radical causes in the name of education reform, as reported by The Washington Times.

But it is most emphatically not about expanding competition and never has been. It has been about decreasing choice, because the public option was designed to crowd out and eventually smother the Obama-demonized private insurance industry. The House plan was entirely about increasing government control over health care decisions, cost allocation, "worthy" beneficiaries of treatment, and coverage.

If Obama were about choice, he wouldn't be forcing those tens of millions of Americans who can afford health insurance to purchase it. He wouldn't be in favor of unleveling the playing field with a government-run option, and he would support true market solutions -- such as real tort reform, eliminating onerous mandates on coverage, and changing tax laws that lock us into employer-provided coverage.

Obama is not only planning to accomplish socialized medicine through Alinsky-Lakoff semantic sleight of hand but also opportunistically, if only briefly, triangulating the far left in the process.

But remember that Obama is their leader. He is hard-left to the core. If he appears to be backing off from socialized care, it's only for appearance's sake -- a temporary retreat in service to an incremental march forward.

When Obama announces that he's backing off the public option, it's a signal that he's launched his end run strategy and that it's time to ratchet up our opposition. If he were the bipartisan exemplar certain naive pseudo-conservatives would have us believe, he would not be attempting to indoctrinate schoolchildren in support of Obamacare, nor would he be appointing one neo-Marxist after another as his czars. Nor would he have recently told compromise-seeking Republican Sen. Chuck Grassley that he wouldn't renounce the public option, nor Sen. Tom Coburn that he wasn't even willing to compromise 20 percent of his plan to get some Republicans to "come across the line."

Republican politicians better not misread Obama or the public sentiment opposing his radical agenda. If they strike a compromise with him and enable the incremental unfolding of his agenda, they will inject new life into his leftist ambitions and doom the Republicans' chance for renewal in 2010. The public sentiment is anti-Obama, not pro-Republican. It will only materialize as pro-Republican if Republicans continue to do the right thing by keeping their Beltway caps off, representing the liberty-loving American people, and opposing Obama on principle.