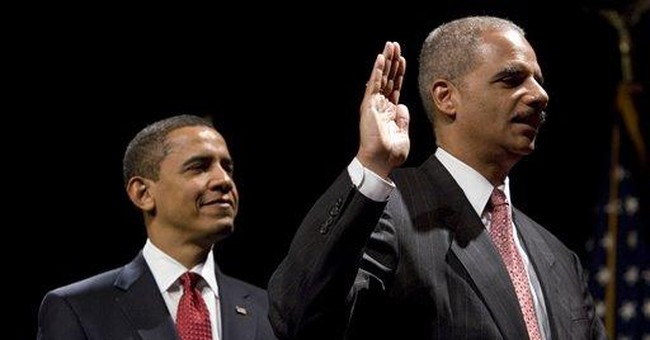 Remember the cacophonous wailing of the left over the Bush administration's alleged politicization of the Justice Department? We always knew they were just projecting, but now we have even more proof.

I first learned from my friend Andy McCarthy's blog post on National Review Online that Attorney General Eric Holder had rejected the legal opinion of his own Justice Department lawyers that the D.C. voting rights bill, which would give the District of Columbia a voting member in the House of Representatives, is unconstitutional.

Why would Holder reject the legal opinion of his own deputies? Dumb question. Because he doesn't like the answer and neither does his boss, President Obama. They both strongly support passage of the bill and do not believe a little trifle, such as an express constitutional provision forbidding it, should be permitted to get in their way. How many times do leftists have to demonstrate that they are an ends-justify-the-means bunch before it sinks in?

The Washington Post confirms that the Justice Department's Office of Legal Counsel, "an elite unit that gives legal and constitutional advice to the executive branch," did issue an unpublished opinion earlier this year that the voting rights bill is unconstitutional. Holder couldn't let that stand, so he went back to the well, hoping for a different opinion.

Lo and behold, the solicitor general's office dutifully served up that opinion and said it could defend the legislation in court should the bill be challenged on constitutional grounds. Hmm.

Now, those of you who don't like it when lawyers muddle up the plain meaning of language should follow me into the next paragraph, where I'll recite to you the pertinent constitutional provision. Please excuse me while I reach up to the shelf to retrieve my pocket Constitution.

Article 1, Section 2 provides: "The House of Representatives shall be composed of Members chosen every second Year by the People of the several States." Would it be too much to ask that we all agree that the District of Columbia is not a state?

On that point, I'll note that Article 1, Section 8 provides for the establishment of a federal district that is distinct from the states. James Madison, the Father of the Constitution, wrote in Federalist No. 43 of the necessity of a separate federal district that serves as the seat of the federal government and is separate from the authority and the territory of any state. Otherwise, "Public authority (of the federal government) might be insulted and its proceedings interrupted with impunity," and the district would have to rely on the state in which it was included, for protection, which could diminish its honor.

The plain meaning of the language of Article 1, Section 2 is clear, is it not? Yet Holder insists his decision to override the opinion of the Office of Legal Counsel is grounded in law, not politics. Right.

If that's true, why do you suppose Holder won't release the OLC opinion in question despite a letter from Sen. John Cornyn demanding its release? Justice said it wouldn't release these "internal deliberations," "because they're not the final, formal opinion."

Tellingly, the Post reports that legal experts don't back Holder's "unusual" decision to seek another opinion. Former OLC deputy Ed Whelan, who served during the Bush administration, calls Holder's decision to ignore the OLC's opinion a "blatant abuse" of the office's purpose.

Liberals are conspicuously silent about this abuse. They want the district to get a congressman because it would guarantee Democrats another seat. But notice their flagrant double standard. When they have their sights set on a desired political result, the law, including the supreme law of the land, is not allowed to interfere, even when there is barely, if at all, a legitimate question about what the law is.

But when government attorneys serving a Republican administration merely render an opinion that liberals don't like (e.g., warrantless surveillance of enemy communications in wartime and waterboarding not being torture), never mind that the opinion, unlike Holder's artificially procured second opinion, is firmly grounded in law; liberals sometimes want to impeach them or put them in jail for war crimes.

If freedom lovers and respecters of the rule of law don't come to the aid of the Constitution soon, we may be looking back in a few years wondering where our liberty went.