Republicans Must Turn Down the Kool-Aid 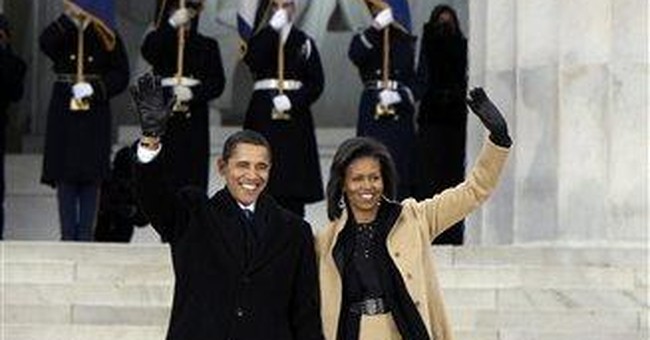 It's going to take real courage the next four years for Republicans to swim against the tide and oppose Barack Obama -- in whom so many have placed their hopes, almost to the point of idolatry. But if Obama governs in a way that's consistent with his promises, the country's future security and prosperity will depend on spirited opposition.

It's bad enough for the liberal media to deify Obama, but it's almost unbearable for right-wing commentators and politicians to jump on this bandwagon, as well, as if Obama's personal attributes have blinded them to the policy dangers he represents.

During the Bush years, the left blamed Bush for the absence of bipartisanship, when, by any rational measure, they were the ones whose relentless vitriol made bipartisanship impossible.

Forgive the analogy, but their reversal of blame is reminiscent of a memorable scene in the movie "Animal House," when fraternity hotshot "Otter" pressured the hapless legacy pledge, "Flounder," into lending him his brother's car. When Otter returned the car after having demolished it, Otter chastised Flounder for entrusting the car to him. "You (screwed) up. You trusted me."

Now, after eight years of this poison, the same specious theme from the Bush bashers has found a new application: "Republicans must work with Barack Obama and restore a spirit of collegiality to Washington," as if they have any moral authority to be lecturing, but even more importantly, as if a spirit of collegiality will solve America's problems.

To be clear, I am not advocating that Republicans return the same mean-spirited partisanship with which the left pummeled Bush. But conservatives must not abandon their principles in pursuit of the seductive, illusory goal of bipartisanship.

You'd think this principle too sophomoric to articulate, and so do I -- almost. But have you been listening to Republican politicians and "conservative" commentators lately behaving as if their eternal salvation depends on jumping aboard a train headed in the opposite direction from everything in which they profess to believe?

Of course the right should support Obama on things they agree with him on and never oppose him gratuitously for purely partisan reasons. Indeed, they should rejoice if Obama were to morph into a free market enthusiast, national security stalwart, champion of the unborn, and protector of our borders.

But such talk is academic, as the chances of Obama being substantively Reaganesque are less than his becoming obese, which means that during the next few years, the articulation of principled conservatism could never be more important. They must resist pressures for bipartisanship from those who will continue to use it as a weapon to intimidate principled opposition.

Perhaps a secret desire for approval from the elites and intelligentsia of the Northeast Corridor explains the squishiness of so many on the right today. Or maybe they are paranoid about appearing ever so slightly racist if they fail to extol the virtues of the first black president -- no disrespect intended to Bill Clinton -- even if his policies are anathema to them.

But can't we acknowledge the positive aspects of America's historic strides in certain aspects of race relations without surrendering to the advancement of liberalism just because the first black president is behind it?

What our government does during the next four years -- maybe the next 100 days -- could have a lasting impact on the future of America's liberty, prosperity and even solvency.

Republicans are already on seriously thin ice, having presided over an era of unprecedented spending and consistently failing to articulate conservative principles on a wide variety of issues. But what Obama has in store will make President Bush appear, in retrospect, like a libertarian.

If, for the sake of appearing to work with Obama, Republicans reduce themselves to offering merely liberal lite the next four years, we're going to have trouble recovering from the inevitable damage to which they will have contributed.

They've already ceded ground on the need for a "stimulus package," though conservative realists understand that doing nothing would be far less destructive to our long-term financial health than throwing good money after bad under the illusion that the government mint is a panacea.

Will they have the courage to stand tough against the further socialization of our health care system and offering market reforms instead, even against the demagogic claims that they are without compassion for the "uninsured"? If not, they will be contributing not only to the permanent demise of America's health care system but also to possibly the end of America's free market tradition.

It's one thing for Obama's leftist cult followers to be oblivious as to the source of their giddiness, but it's completely unacceptable for the right to be rudderless in the face of this potential juggernaut. Lord help us and this great nation if they don't regain their moorings very soon.